Right-wing Republicans in the state House, who have been threatening Kerry Benninghoff’s leadership, demanded a lame-duck vote in a caucus meeting. 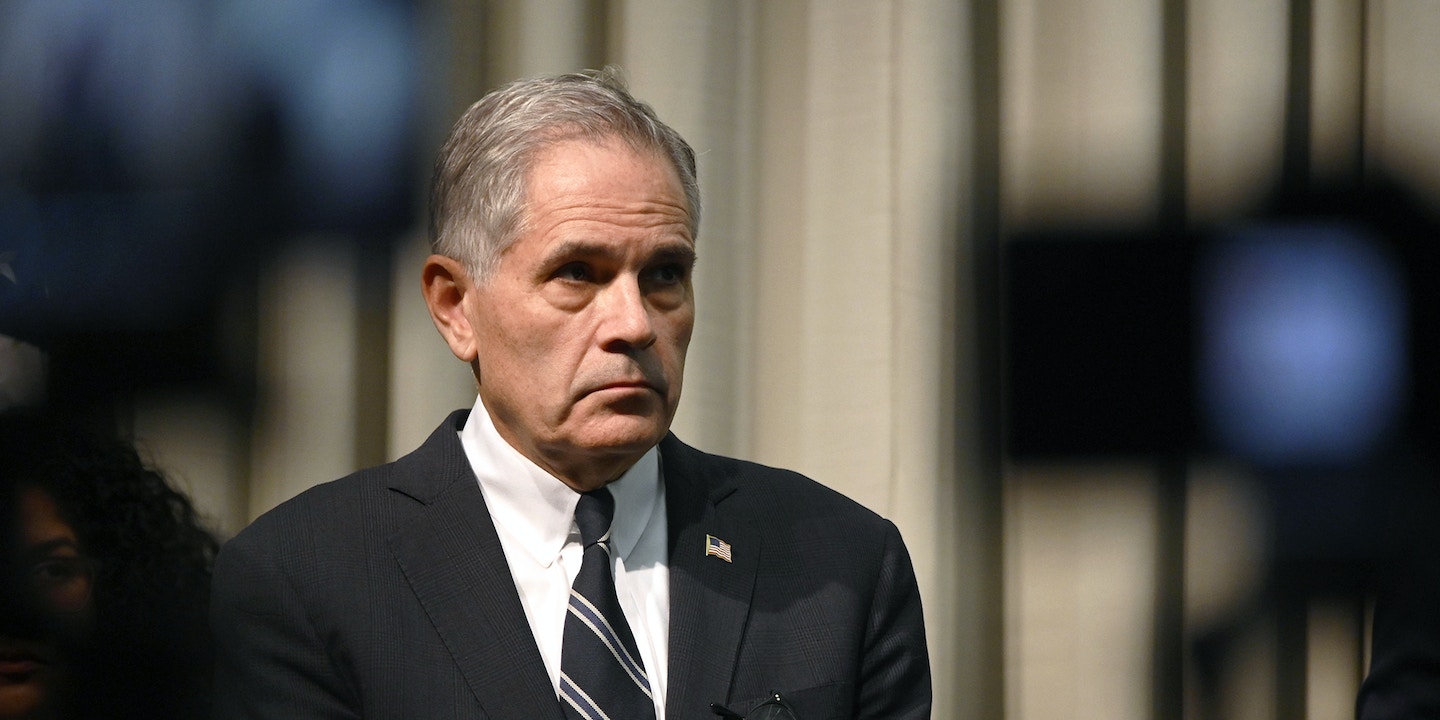 In a contentious Monday caucus meeting of Republicans in the Pennsylvania House of Representatives, Majority Leader Kerry Benninghoff blessed a Judiciary Committee vote on impeaching Philadelphia District Attorney Larry Krasner. On Tuesday morning, the committee passed an article of impeachment in the heavily politicized case to the full state House.

Benninghoff’s moves to bless the committee vote and bring the impeachment before the full House came amid threats from a right-wing fringe of Pennsylvania House Republicans to withhold support for his continuing leadership position, according to five people familiar with the deliberations. Republicans had long suggested that they would try to hold the impeachment vote before the end of the legislative session. Entering the caucus meeting, though, there was no firm commitment to hold the vote during the lame-duck session — before Democrats, who are poised to win control of the state House, can take over. Following the meeting, the votes were quickly scheduled.

Two of the sources said Republican state Rep. Martina White, who represents northeast Philadelphia and is a close ally of the city’s police union, had made it known that if Benninghoff did not run the articles, he may not get support from the bloc of leadership votes she has influence over. (In a statement to The Intercept, White said any claim that she threatened leadership over Krasner’s impeachment was “utterly ridiculous.”)

“If indeed this has become another political football in leadership, in the politics of internal caucus leadership elections, then that’s a hell of a thing.”

The members of Benninghoff’s party pushing the vote were exploiting weakness in his position due to, among other things, Republican losses up and down the ballot in Pennsylvania during midterm elections last week. Benninghoff decided to run the article of impeachment even after Republicans lost their majority to show he’s “still fighting,” according to one person with knowledge of the process who requested to speak anonymously because of their work with the legislature.

“If indeed this has become another political football in leadership, in the politics of internal caucus leadership elections, then that’s a hell of a thing,” said Elizabeth Randol, legislative director at the American Civil Liberties Union of Pennsylvania. “This is a serious thing.”

The ACLU of Pennsylvania has opposed the impeachment efforts and described them as a “sham.” The ability to impeach an elected official is the most serious power afforded to the state House, Randol said: “It’s bad enough that it’s been used in this really reckless way but on top of it, if indeed it’s being used to negotiate leadership, it’s absolute political malpractice.”

The votes in the state House mark the culmination of years of attacks on Krasner’s office by Republicans who claim, without evidence, that his policies of criminal justice reform have driven a rise in crime in Philadelphia. Krasner’s overwhelming reelection last year did not stop the tide or attacks against him, including continued efforts to pass laws that strip his office of prosecutorial authority or limit him to two terms.

Several members of Philadelphia’s police union, which has been vocal in its animosity toward Krasner’s focus on police misconduct, were present at the Judiciary Committee hearing on Tuesday, according to photos of the meeting obtained by The Intercept. Philadelphia Fraternal Order of Police President John McNesby was also in the building but did not attend the hearing, according to a source. (McNesby did not immediately respond to a request for comment.)

The GOP efforts have been led by the chair of House Republicans’ campaign arm, and echo a theme across the country of Republicans attempting to boost their prospects by playing on voters’ fears about crime. The attacks against Democrats came at all levels of government, but reform-minded prosecutors have been particular targets.

After the strategy failed to help Republicans keep control of the state House, aides close to Krasner were unsure that Republicans would go ahead with the vote. But on Tuesday morning, the House Judiciary Committee voted along party lines to approve articles of impeachment against Krasner. The full House vote is expected to vote on the matter Wednesday, one of the final days of the chamber’s legislative session.

White, the state representative, said that Benninghoff was keeping his word to the caucus on bringing a floor vote on impeachment. “When we were last in session, the entire Caucus leadership team — of which I am a member — stood at a press conference united on this topic. We remain so today,” White said. “At that time, Leader Benninghoff said if the Articles of Impeachment came out of the Judiciary Committee, they would be run on the House Floor. He made that commitment prior to this week and is keeping his word as this process moves along.”

Asked about the threats, a spokesperson for Benninghoff told The Intercept in a statement that the office would not comment on internal caucus deliberations. “The effort to hold DA Krasner accountable has been and remains about only one thing: protecting lives, reducing crime, and ensuring Philadelphians can feel safe and be safe in their communities,” Benninghoff’s press secretary Jason Gottesman said. “When the impeachment articles were introduced in October, Leader Benninghoff was clear that if these Articles came out of the Judiciary Committee, they would receive a Floor vote. Nothing between now and then has changed that.”

Democratic strategists and politicians had feared that Republican attacks on Democrats as “soft on crime” would hamper the party’s candidates in midterm elections last week. The attacks, though, failed in many races — particularly in Pennsylvania, where Democrats won major statewide races and garnered a majority in the state House for the first time since 2010.

Democratic state Rep. Jason Dawkins, a Judiciary Committee member from Philadelphia who lost his brother to gun violence, spoke at the impeachment vote hearing to the futility of trying to impeach Krasner as a way to address crime after voters just last overwhelmingly repudiated Republican attacks on crime in Philadelphia and across the state. “We just had an election last week where this issue was at the top of the ticket that folks were sending out all throughout this commonwealth about how lawless Pennsylvania, particularly Philadelphia, looked,” Dawkins said. “What you saw was a direct response to those ads.”

In more than 300 years, Pennsylvania has impeached just a handful of officials, Democratic state Rep. Joseph Hohenstein said during Tuesday’s hearing. The last person to be impeached, in 1994, was a judge “guilty of actual criminal conduct,” Hohenstein said. “This article of impeachment has asked us to stretch the definition of misbehavior in office outside of criminal conduct. But when we look at how impeachment has been handled over hundreds of years, we’ve never done that,” he said. “We don’t do this lightly because we don’t overturn elections.”

“This doesn’t fit any legal precedent in Pennsylvania or in the entire country.”

The attacks on Krasner are part of a broader national backlash against the widespread criminal justice reforms enacted in the wake of protests against police brutality following the murder of George Floyd. Support for reforms that hold police accountable, decriminalize nonviolent offenses, and take a more holistic approach to addressing the root causes of crime drove voters to the polls in record numbers that year, and presented a growing electoral problem for Republicans and tough-on-crime Democrats who were not able to galvanize young Black and brown voters in the same way.

“Today’s resolution is a weaponization of our state constitution for partisan political purposes,” Democratic state Rep. Mike Zabel, a former prosecutor in Philadelphia, said during the Judiciary Committee meeting on Tuesday. “You don’t get to give prosecutors discretion and then tell them what that discretion is.”

Zabel voted in late September with many of his Democratic colleagues to hold Krasner in contempt for refusing to comply with a subpoena issued by the House impeachment committee. The contempt vote took place on the first day of the city’s first-ever murder trial for an on-duty cop, for killing a young, unarmed Black man. The committee issued its final report last month, which did not recommend impeachment but called for ongoing investigation for an unspecified period.

“There is a limit to the partisan games that I’m willing to play,” Zabel said. “I ask you to vote no on this resolution, not on some validation of Larry Krasner, but as a rejection of using the constitution to target political enemies.”

“This doesn’t fit any legal precedent in Pennsylvania or in the entire country.”