Just How Much Is the UAW Strike Fund Worth? $30,000 at Detroit’s Greektown Casino, restaurant tabs approaching $7,000, top shelf cigars, Louis Roederer Cristal champagne, firearms, a $1 million lake house, and, of course, cocaine. This is just a partial accounting of the lavish spending that drew federal prosecutors to charge over a dozen United Auto Workers officials — including two former presidents — over the past five years with embezzling union funds and money laundering. UAW rank-and-file members are currently voting on whether to replace UAW President Ray Curry and allies of now-imprisoned officials in the incumbent Administration Caucus; reformers are running under the banner of UAW Members United on a platform of “No concessions. No corruption. No tiers.”

The election, which ends this month, will have an outsize impact on next year’s contract negotiations between workers and the largest auto manufacturers in America. But an internal union audit obtained by The Intercept shows that current UAW leadership gave its members only a partial view of the value of UAW’s assets — including the strike and defense fund used to pay striking workers’ wages — ahead of the upcoming election.

The audit, which was prepared by Calibre CPA Group and covers the first half of 2021, records a difference of hundreds of millions of dollars between the total cost of assets held by the UAW — including the strike fund — and the appreciated value of those assets. The market value of the investments was not reported to rank-and-file members in the financial report of the secretary-treasurer provided during July’s union convention, or in the financial summary provided to membership in the union’s 2022 magazine. Instead, the report distributed at the convention, which goes through December 2021, presents investments at their original cost basis, meaning that a significant bump in the market was not reflected in valuation of the assets.

“The Union’s financial statements are presented in accordance with the Modified Cash Basis of accounting, under which reporting investments at cost is an acceptable modification,” Sandra Engle, a spokesperson for the UAW wrote in an email to The Intercept. But this way of accounting — called a “modified cash basis” — appears to be highly unusual among union financial reports; financial reports reviewed by The Intercept for the International Brotherhood of Teamsters, International Brotherhood of Electrical Workers, International Association of Firefighters, and the National Education Association all record their financials at fair value, rather than modified cash basis.

Among the many issues debated at the UAW’s 2022 July convention, whether or not to increase strike pay from up to  $500 a week, up from the recently approved $400 a week, was one of the most volatile. Delegates initially approved the increase, but in the final hours of the convention after some delegates had already left the summit, supporters of the Administration Caucus led a motion to reverse the pay hike. The retraction was argued on the convention floor to protect the union’s coffers in the event of a strike.

The UAW constitution includes a provision that automatically reduces union dues if the strike fund exceeds a threshold of $850 million. In 2021, the strike fund was listed as worth roughly $815 million: almost $700 million in “cash, cash equivalents, and investment securities” and around $116 million in “alternative investments.” By valuing investments at cost, instead of at the appreciation value, the $850 million cap is much harder to reach, allowing union officials to continue collecting higher dues from UAW members.

A footnote buried in the 2021 audit reveals that, at fair value, the investments have appreciated significantly in value. The appreciation on all the union’s total funds of $960,020,294 was a staggering $424,954,435 on June 30, 2021, amounting to a total valuation of $1,384,974,729. The strike fund is not broken out in this footnote, so it is unknown what portion of that almost half-a-billion dollars in appreciation is specific to the strike fund investments. In the past year, markets have fluctuated significantly, making it difficult to determine the fund’s exact worth since the audit.

“This is just another example of an out of touch International Executive Board that places its own agenda above that of the membership,” Shawn Fain, the Members United candidate for president, told The Intercept in response to information in the internal audit. “While the Curry Administration claims to be transparent, I find it shameful that the membership has been misled as to the actual value of the strike fund, and that our leadership has severely underreported that value.” 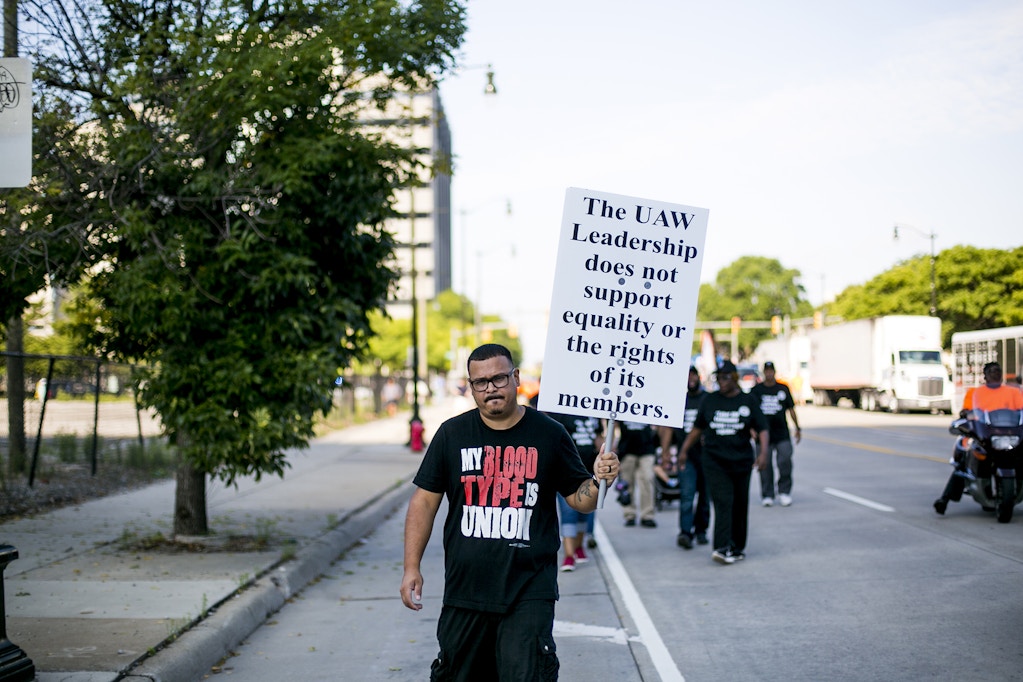 A United Auto Workers member holds a sign reading “The UAW Leadership does not support equality or the rights of its members” during a protest at a Labor Day parade in Detroit on Sept. 2, 2019.

Public LM-2 filings overseen by the Department of Labor also give details on UAW’s alternative investments in venture capital and private equity funds which, while providing higher return on investment, also entail higher exposure to market risk and in many cases cannot be cashed out without severe and costly fees. “These investments cannot be redeemed easily. Instead, the nature of the investments in this category is that distributions could potentially be received throughout the life of each fund from income/interest collected,” the audit report reads.

The lack of financial transparency comes amid Justice Department oversight of the corruption-plagued UAW leadership. In 2021, a federal judge appointed an independent monitor to oversee the UAW for a period of six years, with the power to investigate corruption and fraud while also conducting oversight on the ongoing leadership election. That same year, the monitor accused UAW leadership of failing to cooperate with oversight actions. This month, the monitor found that UAW President Ray Curry violated election rules by using union assets to campaign.

The fallout from a half-decade-long corruption scandal has also forced a change to the UAW election format. Instead of electing delegates to represent workers in elections, union members will now vote directly for candidates under the one member one vote model. The change came after workers voted in a federally mandated referendum to change the election system. On the heels of a historic Teamsters union election that saw a near-century-long Hoffa dynasty disrupted by a reform leadership election, UAW may soon follow suit.

“Our strike fund is crucial for ensuring that we can strategically hit the companies where it hurts, so we can end tiers, reverse concessions, and win back COLA and pensions for all at the bargaining table,” Fain, the Members United candidate for president, said. “The membership deserves better!”