The midterm strategy to fund Republican extremists in the primaries worked. Some fear it will strengthen the far right in the long term. 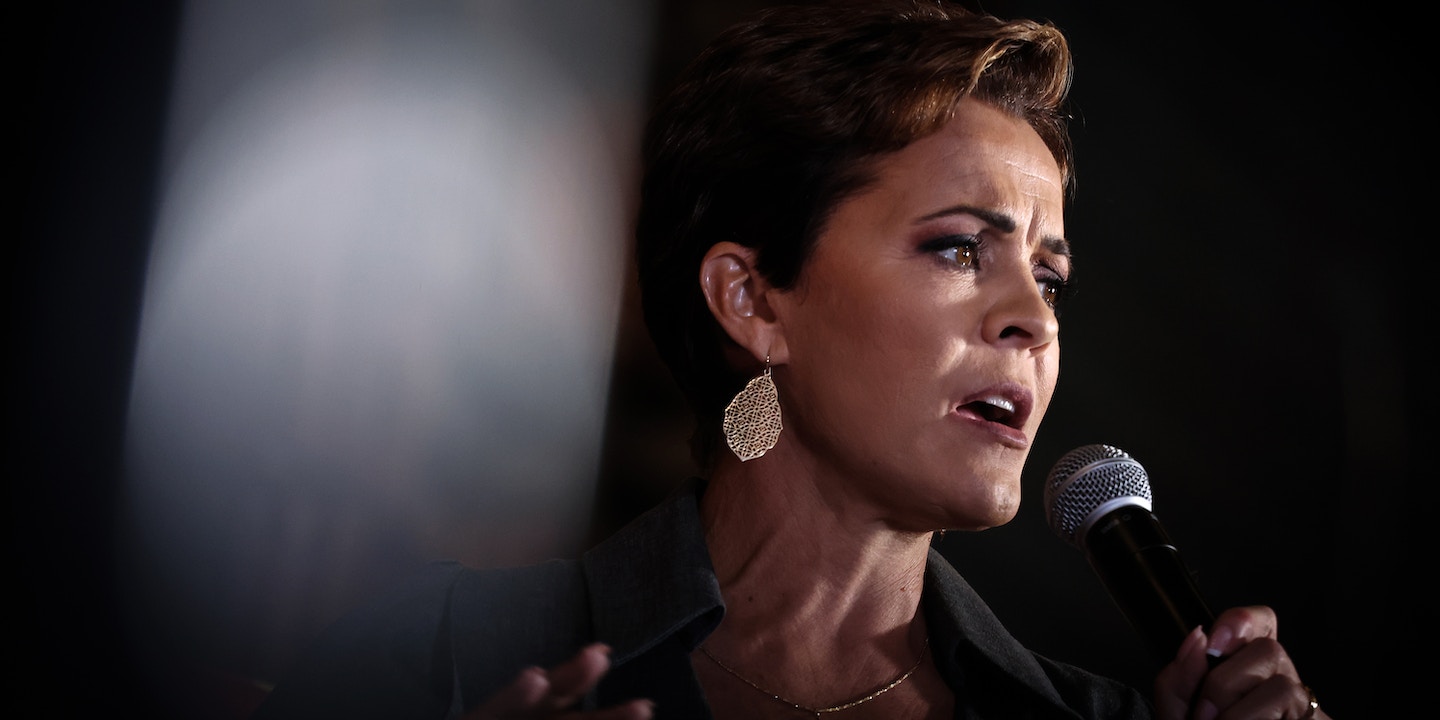 The Democratic release dryly thanked Robson “for her longtime financial support to help elect Democratic candidates up and down the ballot” and described her past attacks against Lake for giving to Democrats as “hypocrisy.” Arizona Democrats insisted they were not spending on the race, but the email was widely interpreted by mainstream media and conservative outlets as an attempt to interfere in the Republican primary to boost Lake. Two weeks later, Lake pulled further ahead in polls and by early August won the Republican gubernatorial primary.

Last week’s election for governor was so close that it took almost a week to count enough ballots to call it. On Monday, Lake lost the general election to the Democratic candidate, Arizona Secretary of State Katie Hobbs, by less than 1 percentage point.

“The Democratic Party leadership should treat the rise of the authoritarian right as a real threat, not a talking point.”

The Arizona race was one of several key primaries in which national Democrats boosted Republicans they deemed more or less unelectable — candidates like Lake who denied the results of the 2020 presidential election. In what was anticipated to be a brutal midterm cycle, boosting extreme candidates could, the theory went, help Democrats fare better in general elections.

The strategy ended up working in Arizona. Yet even in defeat, Lake and some of the other extremist Republican candidates still out-performed expectations. For some political observers who work with Democrats, the Arizona race shows how dangerous the strategy could be in emboldening anti-democratic sentiment and fueling polarization.

“The Democratic Party leadership should treat the rise of the authoritarian right as a real threat, not a talking point,” Maurice Mitchell, national director for the Working Families Party, said in a statement to The Intercept. “Helping MAGA Republicans to win their primaries was reckless and irresponsible. I hope it doesn’t come back to bite us all.”

Not every election where Democrats employed the strategy ended up as close as Arizona. The party scored resounding wins in governors’ races in Maryland, Illinois, and Pennsylvania, as well as a crucial Senate election in New Hampshire.

Ken Snyder, a national Democratic campaign consultant with experience in Pennsylvania, who saw “smashing success” in Pennsylvania and Illinois, said, “This time the tactic worked more often than it didn’t.”

In races where the gambit clearly worked, Democrats spent millions boosting Republican candidates. Though Democrats didn’t spend to back Lake in the Arizona race, they did pour more than $53 million to back Republican primary candidates in races in California, Colorado, Illinois, Maryland, Michigan, New Hampshire, Pennsylvania, Virginia, and Nevada.

And in Illinois, Democratic Gov. J.B. Pritzker used tens of millions from both his campaign and the Democratic Governors Association’s coffers to help elevate far-right candidate Darren Bailey to the Republican nomination. Again, voters rejected Bailey and went heavily for Pritzker.

Concerns over the high-dollar amounts were twofold. First, the extraordinary financial cost of backing extremist Republicans came as other struggling Democratic candidates have said they were spurned after requesting support from the party.

In addition, some Democrats worried that the push to boost far-right Republicans might alienate the party’s donors. “Historically, this has been a well-known tactic with minimal repercussions,” said Lauren Tsuboyama, a Democratic strategist at the consultancy Blue State. Today, donors might not want to see their money going to extremist Republicans: “Now, more than ever, voters — especially Democratic voters — are paying closer attention to where their hard-earned donations are being spent.”

Another potential downside for Democrats could have been their chosen MAGA Republican candidates being defeated in their primaries. “It looks like you’re running against the person you feared the most,” said Snyder, the Democratic consultant, noting that the more moderate GOP member would have a baked-in centrist narrative. That’s not how it played out, though.

In Michigan’s 3rd Congressional District, the Democratic Congressional Campaign Committee, the party fundraising organ, spent half a million dollars on ads boosting a Trump-backed candidate. The incumbent Republican, who had voted to impeach Trump last year, lost the August primary by 3 points, but Democratic candidate Hillary Scholten went on to win the race by 13 points anyway.

“Foregrounding Republican extremism wins Democrats elections. When you’re devising campaigns, a really risky way to do that is by playing in those Republican primaries.”

For a party that’s had trouble crafting a coherent message around its achievements under President Joe Biden, Republican candidates touting election denials seem to have worked as an effective foil.

“While there is cognitive dissonance in this strategy,” said Alyssa Cass, a Democratic strategist who worked on Democratic candidate Pat Ryan’s competitive race in New York’s 18th District, “I’m not someone that shared the hand-wringing over it initially.”

Conventional wisdom leading up to the election — including polling, guidance, and general advice for Democratic strategists — was that messaging to voters that democracy was under threat wasn’t effective, Cass said. “This election shows that that was really wrong,” she said. “Foregrounding Republican extremism wins Democrats elections. When you’re devising campaigns, a really risky way to do that is by playing in those Republican primaries.”

A few hundred or a thousand votes the other way could have delivered a different outcome, Cass said, but the particularly grim political stakes this cycle played in Democrats’ favor.

Moreover, the dangers of stoking extremism and polarization, Snyder said, should be the responsibility of Republicans: “Whose fault is it when a radical extremist wins a Republican primary?” he asked. “I think national Republican leaders need to look in the mirror for having created this dynamic in which candidates with extreme radical views can win their primaries to begin with.”