A new documentary challenges Israel’s narrative about 1948 and the forced displacement of Palestinians. 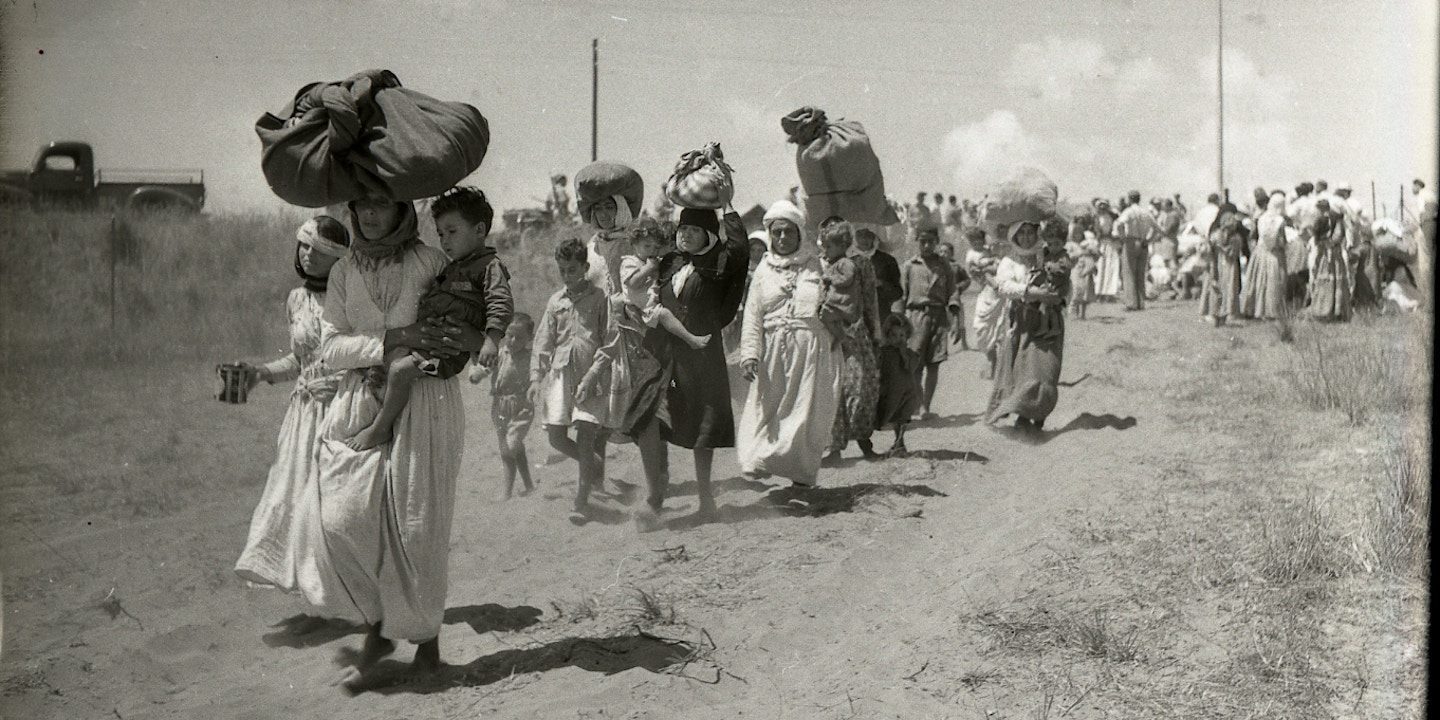 The state of Israel so fears its own history that it passed a law, in 2011, penalizing anyone who commemorates the day of its establishment as one of mourning rather than celebration. Dubbed the “Nakba law” after the Arabic word for “catastrophe,” which Palestinians have always used in reference to the establishment of the Israeli state and their own displacement, the law captures the existential anxiety of a country that has never acknowledged its past even as it continues to struggle with its ramifications.

Israel’s narrative of its own birth is tightly orchestrated and controlled. Before the military opened its archives of the 1948 war, it issued a policy forbidding the release of any documents detailing the forced deportation of Palestinians; any human rights violations, including war crimes, committed by Israeli forces; or anything that might “harm the [Israeli Defense Forces]’s image” or expose it as “devoid of moral standards.”

Few in Israel are interested in finding out anyway. What happened in the days leading up to and following Israel’s establishment, at what cost their country came to exist, are questions that generations of Israelis have refused to ask. “For Israelis, the founding myth is that the Palestinians just ran away by themselves,” Alon Schwarz, an Israeli filmmaker, told me when we recently met. “Israel is lying to itself.”

Even in the so-called Zionist left circles in which Schwarz grew up, questioning the events surrounding 1948 was always “taboo,” he noted. So after his first film about a Holocaust survivor was widely celebrated in Israel — because “it fit the national narrative,” he said — he set out to tell another story, that of the horrors that young men and women carried out in order to build an Israeli state where Palestinians once lived.

The result is “Tantura,” the product of more than two years of research and interviews with dozens of those men and women, now in their 90s, about events most of them had never talked about and many of them once outright denied. In “Tantura,” named after a Palestinian beachside village near Haifa that was wiped off the map during the Nakba, Schwarz sets out to investigate the massacre of an unknown number of villagers that was carried out just a week after the establishment of the Israeli state.

The film, opening in theaters in the U.S. next month,  tells a story few Israelis want to hear — “a story they don’t know what to do with,” he said — but Schwarz is not the first one who tried to tell it. In the 1990s, Teddy Katz, an Israeli graduate student, interviewed members of the IDF’s Alexandroni Brigade, the unit that carried out the massacre, and wrote a thesis based on their testimonies. He was destroyed for it, taken to court, forced to retract his thesis, and to apologize. He never got his degree. But nobody, before Schwarz, asked Katz to listen to those interviews. Armed with the tapes, years later, Schwarz returned once again to the members of the brigade, now close to the end of their lives, and asked them to speak about what one doesn’t speak about in Israel.

The film is a harrowing inquiry into individual memory and trauma as they clash with the untouchable narrative of a nation that has convinced itself of its purity.

The film, made more vivid by unseen archival footage of the Nakba and the modern-day forensic reconstruction of a long-erased mass grave turned parking lot, is a harrowing inquiry into individual memory and trauma as they clash with the untouchable narrative of a nation that has convinced itself of its purity. It is an effort to learn the truth of what happened in Tantura, but more so a film about Israeli society and the lingering damage of its founding sin.

It’s also a story that Palestinians have never stopped telling, but there is something unique about hearing it from the perpetrators themselves. “The Palestinians know the story. They’ve been talking about it, and the world has heard from them, but the world believes the Israeli side a lot of the times, and Israelis do not admit to this story,” said Schwarz. “This is a story of Israel looking the other way.”

Schwarz knew when he set out to tell Tantura’s story that like Katz before him, he was probing into a chapter of Israeli history that nobody there wanted to disturb. As Katz’s wife recalls in the film, after her husband’s thesis caused a scandal, several people told her, “Listen, we know it happened. But why say it? Why talk about it?”

In one of the film’s most poignant scenes, Katz, in a wheelchair after suffering multiple strokes, asks Schwarz whether he is ready to be “hunted down like I was.” In a way, Schwarz’s film met the same forceful rejection as Katz’s thesis. Tantura was one of the most discussed films in Israel in recent years, and one of the most condemned. For all the debate, not many people watched it. In the U.S., the film opened at Sundance and earned much critical praise, but no distributor was willing to risk the guaranteed backlash of associating with it. “It’s not a crowd-pleaser,” said Schwarz. “People look away. People want to go to the shopping mall and eat ice cream.”

Some historians, including prominent ones, have denounced Schwarz as a fraud and a liar much as they did Katz before him. But once again, few seemed willing to excavate the past and dig through the evidence. “Don’t you want to solve it once and for all?” Schwarz asks a historian who told him he doesn’t believe witnesses. “I don’t care if it isn’t solved,” the historian replies in the film.

Israel is hardly the only country that whitewashed the history of its founding to serve a nationalist narrative, but because that history is so recent and because some of those who can contradict that narrative are still alive, Tantura offers a rare insight into how national myths are created and defended, and at what cost.

In Israel’s case, that narrative is defended all the more forcefully and that insight is made all the more urgent by the fact that the dispossession of the Palestinian people is ongoing. The recent Israeli election, which returned former Prime Minister Benjamin Netanyahu to power and is slated to give the country its most right-wing government to date, is yet another reminder of the state’s unfinished expansion.

Palestinians are hardly the ones who need reminding of that, or of the past. In contrast to many of the Israeli brigade members interviewed in the film — some of whom claim not to remember horrific details about the battle for Tantura but remember going for a swim at the beach after the massacre — a Palestinian woman who was a child at the time says in the film, “I remember everything that happened in Tantura. I haven’t forgotten a thing.”