Railroads have invested heavily in Congress. They got their payoff in the Senate. 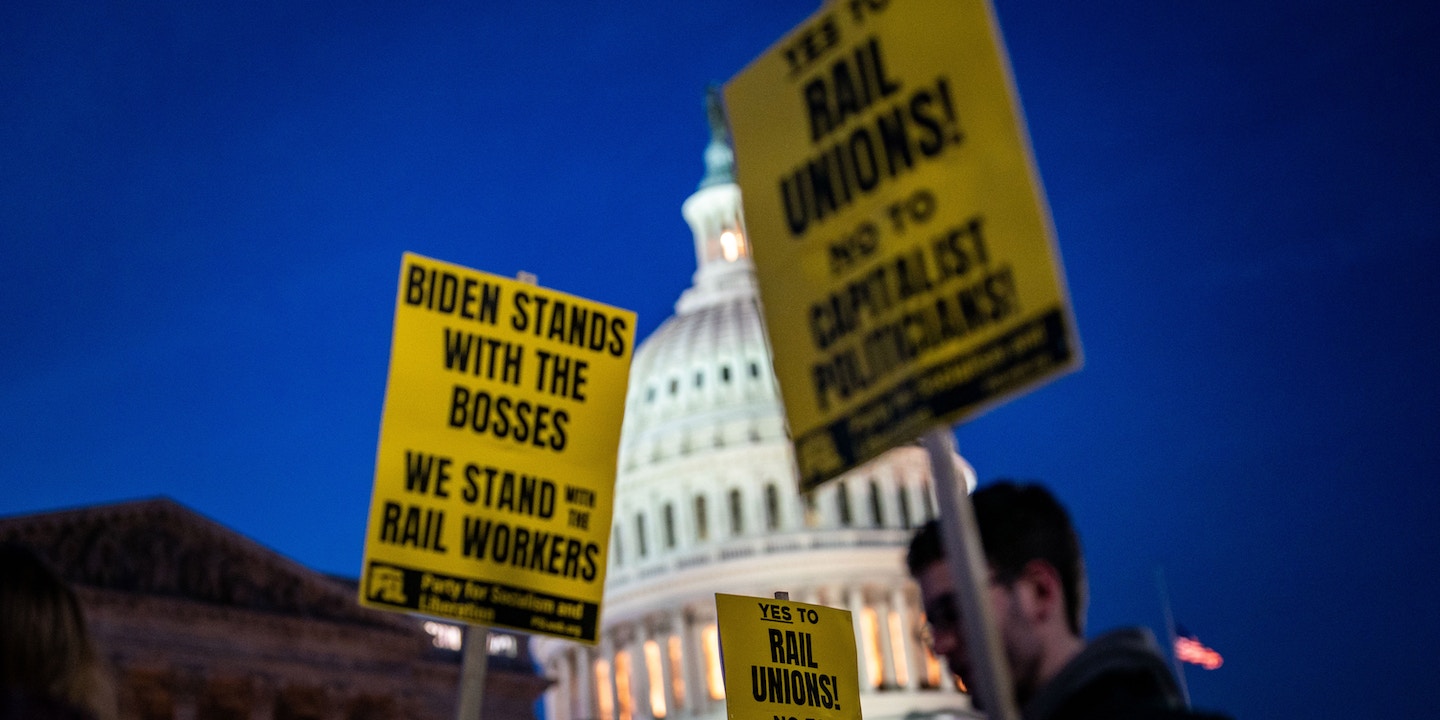 Update: December 1, 2022
On Thursday, the Senate voted 52-43 in favor of a measure that would have ensured rail workers were granted seven days of sick leave in a tentative agreement brokered and enforced on the workers and their employers by President Joe Biden. But the measure needed 60 votes to overcome a filibuster. Democrat Joe Manchin voted no on the sick days, while a handful of Republicans — Sens. Ted Cruz, Josh Hawley, Marco Rubio, Mike Braun, John Kennedy, and Lindsey Graham — voted in favor.

The rejection of the measure means that Biden’s version of the tentative agreement, which passed the Senate 80-15 shortly afterward, will be imposed on workers after Biden signs the bill, averting a looming strike. The new agreement, which represents a marginal improvement on the tentative agreement rejected by workers in late October, ensures only one new paid day off for workers. The companies had furiously opposed even a single additional day off, as it runs in conflict with their strategy to keep staffing as minimal as humanly possible.

Over the past three years, railroad executives have taken over $200 million in compensation as workers attempted to force their hand for sick pay during a bargaining process that has stretched on for years.

The Senate showdown came after progressives in the House successfully demanded a vote on the sick days to accompany approval of the tentative agreement. The strategy was criticized by some on the left, who saw it as selling out workers, arguing instead that the contract should have been amended and sent to the Senate as one piece of legislation.

Rep. Alexandria Ocasio-Cortez, D-N.Y., defended the strategy, saying that unions in her district and nationwide supported the effort to pass additional sick leave in lieu of a viable option to actually sink the proposed tentative agreement. The options available to the unions and to progressives in Congress were extremely limited by the time Biden moved to force the agreement on the workers. The Railway Labor Act allows Congress to enforce collective bargaining agreements in order to avert railway strikes.

“Tanking wasn’t an option bc of GOP votes,” she wrote on Twitter, “we moved to keep sick leave alive.”

Yes, and not just national leadership either - we followed the strategy ask of our local unions, including rank + file we’ve picketed alongside before (like 202) as well as nationals that rejected ratification. In NY-14, locals ask was yes/yes so we could send paid sick to Senate

Perfectly reasonable. This is the best we could do w/ the hand we were dealt - WH sprung this on us & we had a window of <24h to secure sick leave when they had the votes locked to pass w/ no changes. Tanking wasn’t an option bc of GOP votes, we moved to keep sick leave alive

A railway union source said that the next phase of the fight would be a demand that Biden include rail workers in a coming executive order that would mandate 56 hours of paid sick leave for federal contractors. The bipartisan support in the House and Senate for the sick days, even though it fell short of 60, could boost the argument for including such workers in the order.

A showdown over a looming railroad strike heads to the Senate floor this week, after a group of progressive Democrats, led by Rep. Jamaal Bowman, D-N.Y., pushed to modify a tentative agreement to include seven days of sick leave. The expanded agreement passed the House 220-206 on Wednesday, and the fight now moves to the Senate, where it remains unclear if there is enough Republican support to overcome a filibuster and send the agreement to President Joe Biden’s desk.

The original agreement was approved by a bipartisan majority, 290-137, with the extra sick days added as an “enrollment correction.” With a strike deadline approaching, Senate Democrats have the choice of insisting Republicans approve the expanded agreement, or folding and allowing the original agreement, which includes just one sick day, to move through. Aside from Sen. Bernie Sanders, I-Vt., and a handful of allies, there appears to be little appetite for such a fight.

The tentative agreement was brokered by Biden and has been publicly rejected by the rank-and-file members of the union. Federal law, however, allows Congress to impose labor agreements in the rail industry to avert strikes. The single day of sick leave itself represented a breakthrough. Time off is an especially contentious issue because the companies have stripped the number of staff on a single train well below the bare bones. With often just two staff for an entire train, if one calls out sick, the entire system is threatened, leading to draconian attendance policies in order to maximize profits.

On Monday, House Speaker Nancy Pelosi had told her caucus that there would be an up-or-down vote on the tentative agreement between the companies and the unions, with no amendments allowed. “This week, the House will take up a bill adopting the Tentative Agreement — with no poison pills or changes to the negotiated terms — and send it to the Senate,” she said.

But Bowman introduced a measure to give seven days of sick leave, joined by the other five members of the Squad and Rep. Chuy Garcia, D-Ill. In the Senate, Sanders floated a companion version. Public pressure quickly led Pelosi to say she would, after all, allow for a vote on changes to the deal, sending out a new letter on Tuesday night amending her approach. On Wednesday, the Congressional Progressive Caucus announced it had reached a deal to support the new floor strategy, which creates two separate votes that would allow the Senate to reject the expanded agreement and pass the original agreement without it needing to come back through the House.

The Senate vote puts pressure on a Republican Party that has increasingly positioned itself as a champion of the working class. Sen. Marco Rubio, symbolic of that attempted transformation, said Tuesday he would follow the lead of the workers.

The railways & workers should go back & negotiate a deal that the workers,not just the union bosses,will accept

But if Congress is forced to do it,I will not vote to impose a deal that doesn’t have the support of the rail workers

On Tuesday, Sen. John Cornyn, the influential Republican from Texas, signaled openness to expanding sick days to seven, but on Wednesday walked it back. “I just think it’s a bad idea for Congress to try to intervene and renegotiate these collective bargaining agreements between labor and management,” he said.

Rep. Alexandria Ocasio-Cortez, D-N.Y., told Punchbowl News’s Jake Sherman she was fighting “tooth and nail” for the seven days of leave, calling it a “showdown.”

With agreement in the House and a deadline for a strike looming, the dynamics put Senate Republicans in the awkward position of forcing a rail strike in order to block workers from getting an extra six days of sick leave, a position that might be difficult to defend politically amid the economic pain that would be caused by a strike — and that could be ended simply by Republicans agreeing to allow modest time off. But if and when they block the expanded agreement, pressure will be on Democrats to pass the weaker deal and avert the strike.

“Put up or shut up,” said Sanders on MSNBC. “If you can’t vote for this, to give workers today, who really have hard jobs, dangerous jobs, if you can’t guarantee them paid sick leave, don’t tell anybody that you stand with working families.”

Sanders and 12 colleagues with a statement on the rail legislation. That's the floor of support for the sick leave amendment, which needs 60. pic.twitter.com/f6L3em3VEL

As lawmakers scramble to pass a deal before the December 9 deadline when workers are allowed to strike, unions have hailed lawmakers’ efforts to add sick days into their contract.

The Brotherhood of Maintenance of Way Employes “applauds the representatives in Congress and any Senators that will stand in support of Railroad Workers receiving paid sick leave,” Peter Kennedy, a spokesperson for BMWED, which represents tens of thousands of union rail workers, told The Intercept. “The additional legislation needs to pass so that Railroad Workers will have basic protections against illness, and protection from punishment from the railroads when workers are most vulnerable.”

Railroad companies have spent years softening legislators in preparation for such a moment. As the fight moves to the Senate, it will do so under a Congress whose members have been the recipients of at least $20 million in campaign cash from the rail industry over the past decade.

A coalition of over 400 trade groups signed a letter to congressional leaders on Monday, calling for Congress to act to avert a rail strike. “While a voluntary agreement with the four holdout unions is the best outcome, the risks to America’s economy and communities simply make a national rail strike unacceptable,” they wrote.

A review of campaign finance records shows 19 members of Congress who have received at least $10,000 each from railroad companies in the past election cycle. Another 130 members each received at least a $1,000 contribution from either rail operators or the Association of American Railroads, the largest industry trade group. According to OpenSecrets, AAR has spent over $3.5 million on lobbying this year, consistent with past trends.

Since 2020, the rail companies Union Pacific and BNSF — which have both been locked in tense negotiations with the unions — spent nearly $1.5 million each in direct contributions and donations to congressional campaign political action committees. The two massive employers, along with rail operator Northern Southern, have spent the past decade scaling back their workforces, refusing to give sick days to workers, and operating dangerously understaffed trains.

Union Pacific and Norfolk Southern often compete for the first and second-lowest ratings on Glassdoor for any employer in the U.S. In February, BNSF — which is controlled by billionaire Warren Buffett’s firm Berkshire Hathaway — began penalizing workers taking time off for “fatigue, family emergencies, or illness.” At the same time, a federal judge ruled a rail strike illegal.