“We’re Coming for You”: Italy’s Neofascists Target Journalists as They Assume Power

Italy’s new prime minister, Giorgia Meloni, has inspired a surge of far-right threats and attacks against journalists and critics. 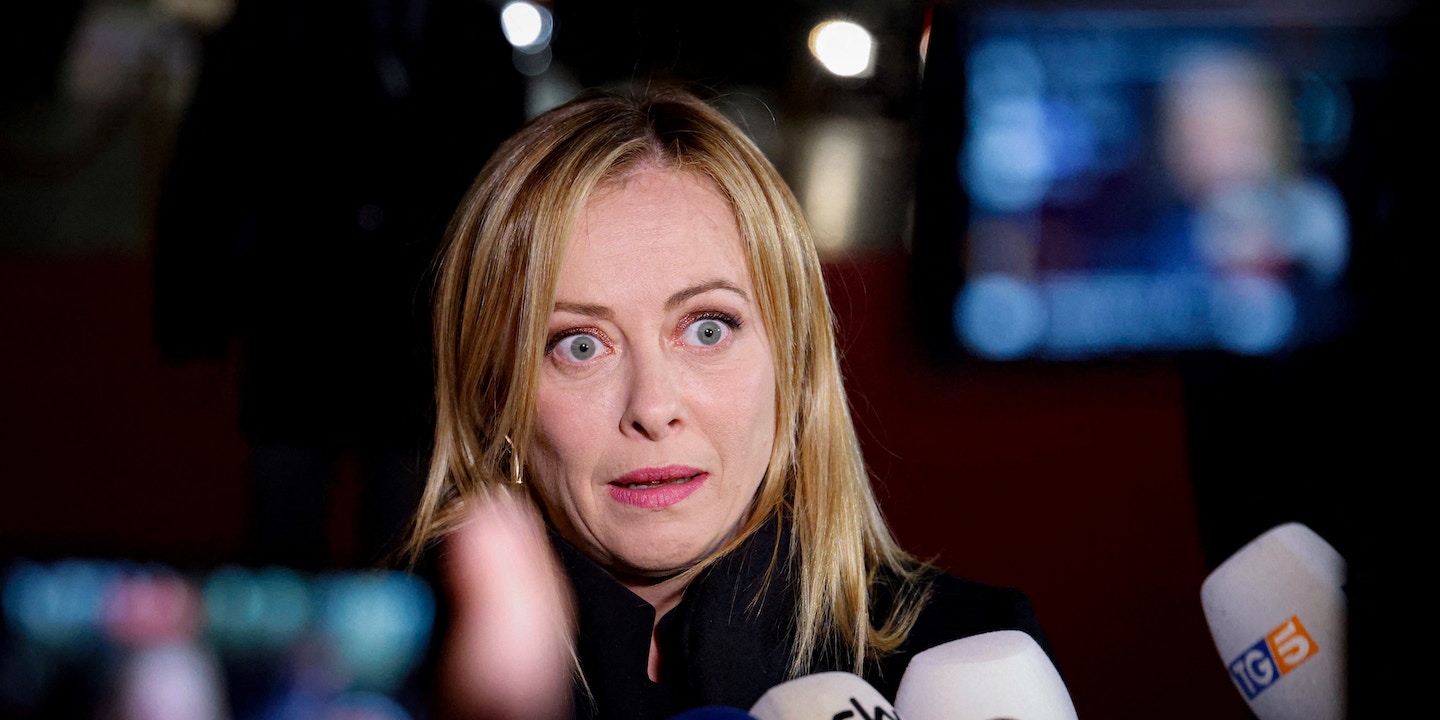 A day after Italy’s general election this fall ended in a triumph for the Brothers of Italy, a far-right party with neofascist roots, Paolo Berizzi, a journalist with one of Italy’s largest newspapers, shared some of the messages he was receiving on social media. “Die. Run away. Castor oil,” the messages read — the latter an explicit reference to a form of torture favored by supporters of Italian fascist dictator Benito Mussolini. “Hang yourself. … Stop writing. We’re coming for you.”

With Italy slated to get its most extremist government since Mussolini gave fascism its name, the messages were a chilling reminder of just how confident Italy’s far-right exponents had become. For Berizzi, however, they were not new. Nearly 200 Italian journalists have been receiving police protection in recent years, two dozen of them living and working under escort around the clock. But the veteran correspondent with La Repubblica was the first reporter in Italy — and in Europe — to need 24-hour police protection not because of his reporting on organized crime, traditionally the greatest threat to journalists’ safety in Italy, but because of his investigations of the country’s emboldening extremist and neofascist groups.

“It’s not a record to be proud of,” Berizzi told The Intercept in a recent interview. “It reflects the climate in Italy around those who cover fascists and neofascists, and who more broadly write about hatred, racism, homophobia, antisemitism. … In Italy, fascists have reached a level of intimidation of journalists that is comparable to the mafia’s.”

“This is a party that’s rooted in the fascist tradition,” he added, referring to the Brothers of Italy. “The entire galaxy of the extreme right feels protected and galvanized now.”

The threats are not limited to social media — although they are rampant and relentless there. There are currently 16 different court proceedings relating to threats against Berizzi, and a court recently issued the first conviction against a man who called for his death online. “In recent years, they have attacked all my physical spaces,” Berizzi said. “They vandalized my home, my car. They hung signs on streets, overpasses, inside stadiums.”

While he is one of the most prominent journalists regularly covering Italy’s extremist right, including top officials in the new government, Berizzi is hardly the only one facing intimidation campaigns that are sometimes directly incited by members of Italy’s far-right political parties, all the way up to new Prime Minister Giorgia Meloni. Another is Rula Jebreal, a Palestinian-Italian political analyst and writer who is also a frequent commentator on U.S. networks. As a Muslim, Black immigrant woman with a history of calling out racism, misogyny, and extremism in her adopted country, Jebreal has for years been on the receiving end of torrents of racist and sexist abuse, as well as death and rape threats. But after this year’s election, and after she reminded her audience of some of Meloni’s most extremist statements in the past, Jebreal saw the abuse spike. In September, Meloni threatened to sue her over a tweet in which Jebreal conflated separate comments made by the new prime minister, albeit without changing the gist of her message. Within hours of Meloni naming Jebreal on Facebook — “lighting the fire,” as the writer put it — hordes of social media trolls were unleashing threats toward her. Italian mainstream publications soon chimed in  — in a tone that was hardly more civil. Il Giornale, a daily owned by the family of former prime minister Silvio Berlusconi, just a few weeks earlier had referred to Jebreal with words like “kefyah,” “Islam,” “#metoo,” and “intifada” — not exactly subtle dog whistles.

“They feed you to their audience.”

Meloni did not, in the end, sue Jebreal. (In 2020, while a member of the opposition, she did sue another prominent Italian journalist, Roberto Saviano, one of the reporters living under full-time police protection for his coverage of the mob, in a defamation case that’s currently underway). But the mere threat of legal action, and the fact that an incoming prime minister would directly attack an individual journalist, explicitly naming her, was a remarkable escalation in the already hostile relationship between Italy’s far-right politicians and a dwindling number of members of the Italian media willing to challenge them.

“They feed you to their audience,” Berizzi noted of those politicians’ use of social media platforms to direct abuse at their critics. “When political powers abuse that power to put you in the viewfinder, that’s something that’s against the principles of democracy.”

That’s by no means an Italian trend alone. “An autocratic party is going to attack journalists, they all do,” said Ruth Ben-Ghiat, a historian who wrote a book about authoritarian leaders and who has noted the similarities, as well as direct connections, between Meloni’s party and the Republican Party.

For Jebreal, the latest round of personal attacks was a reminder that she represented the very kind of Italian diversity that Meloni’s party had for years campaigned against.

“I think ultimately Meloni and her team are trying to make an example out of me, to say, ‘We’re in power now.’”

“She’s been trafficking in these conspiracies that are white supremacist, and antisemitic, for a while,” Jebreal told The Intercept, referring to Meloni’s past invocation of the racist “great replacement” and “ethnic substitution” theories, and her antisemitic references to conspiracy theories about billionaire investor and philanthropist George Soros. “And there’s little or no pushback. I’m one of the few voices that’s been pointing out how this is radicalizing people, how hate crime is skyrocketing in Italy.”

“I think ultimately Meloni and her team are trying to make an example out of me, to say, ‘We’re in power now,’” she added. “Intimidating journalists is typical fascist politics. They’ve done it before, they’re doing it again. She has never disavowed her fascist base. … She’s trying to depict herself as a moderate. She is no moderate, she is an extremist.” Meloni co-founded the Brothers of Italy in 2012 after an earlier ultraconservative party, the National Alliance, merged with Berlusconi’s party, Forza Italia. The National Alliance was a direct descendent of the Italian Social Movement, shortened to MSI in Italian, a fringe party established shortly after World War II by former supporters of Mussolini (his original National Fascist Party was banned after the war). Meloni got her start in politics in the MSI’s youth wing. Like MSI and the National Alliance before it, Brothers of Italy never got rid of the tricolor burning flame in its logo, a clear assertion of its ideological continuity with the earlier neofascist parties. The party’s slogan — “God, Fatherland, Family” — is also a relic of Mussolini’s days.

But as they gained in popularity as the only party in opposition to the national unity government of Mario Draghi, the Brothers of Italy launched a largely successful campaign to rebrand themselves as mainstream conservatives rather than neofascists, while Meloni, Italy’s first female prime minister, became a glass ceiling-shattering trailblazer.

That kind of rebrand is something the far-right has mastered, and not just in Italy, said Ben-Ghiat. “The political right is very skilled at consolidating certain narratives, and this one is that Meloni and her party are conservatives. And yes, they have the logo of a neofascist party, but that just means they’re patriots,” said Ben-Ghiat. “This is covering up their history of hatred and fascism.”

Italian media, for the most part, has gone along with the rebrand. That’s in part because of a reactive, polemics-driven kind of journalism with little historical memory — and out of publications’ tendency for self-preservation or opportunism. “It’s a terrible Italian habit, to jump on the winner’s bandwagon,” noted Berizzi.

“I think even before the election, we saw this tendency to normalize Meloni,” echoed David Broder, author of a book about fascism in contemporary Italy and of several columns warning against the whitewashing of the current government’s neofascist roots. As the Italian press has begun to cover Meloni’s tenure, Broder added, “it has very much sought to normalize, or treat as kind of irrelevant, even very extremist statements from quite recently.”

Meloni’s references to great replacement theory, for instance, are largely “erased from the collective memory,” said Broder, even as she has gone on appoint to top ministries a spate of far-right extremists. Deputy Infrastructure Minister Galeazzo Bignami was once photographed wearing a swastika armband. Minister for Regional Affairs Roberto Calderoli once compared Italy’s first Black minister to an “orangutan.” Foreign Minister Antonio Tajani once praised the “positive things” Mussolini did. (Meloni famously called Mussolini “a good politician,” adding that “everything he did, he did for Italy.”) Far-right militants hold torches during a demonstration against the shipment of arms to Ukraine in Milan, Italy, on Dec. 4, 2022.

Meanwhile, journalists like Berizzi who continue to write about the new government’s extremist connections are being dismissed, when not outright targeted. “They are quite intolerant of criticism,” said Broder, referring to Meloni and her allies. “And they very much tend to reply to criticism from journalists by accusing the journalists of being just left-wing ideologues, whom they therefore don’t have to answer to.”

They have also increasingly taken to threatening legal action, although they have rarely followed through with it.

“We’ve seen in recent weeks how quickly some of these ministers have been to start claiming that they’re going to sue people, even for making very well-founded criticisms of them,” noted Broder. Even when the legal action doesn’t materialize, he added, “there is an attempt to cow critics of the government into submission through these legal threats.”

A commentator on U.S. as well as Italian politics, Jebreal has long been used to the abuse directed at her. But nothing prepared her for the harassment campaign that followed Meloni’s threat to sue her. “They know exactly what will follow: the death threats, the rape threats, the looming violence,” she said.

“They’re basically telling their supporters whom to target,” she added, referring to Meloni and her allies’ references to her as a “wink wink nudge nudge,” giving their supporters permission to target her for abuse. “I receive more death threats and rape threats than when I appear on CNN to denounce Trump’s racism.”

In Italy, as in the U.S., that online abuse has increasingly spilled into real life. Racially and politically motivated attacks have been on the rise for some time, and last year, a group of neofascists attacked and destroyed the headquarters of one of Italy’s largest trade unions after failing to reach the prime minister’s official residence. Local commentators dubbed the episode the “Italian Capitol Hill” in reference to the January 6 insurrection in Washington, D.C., but it was also an eerie reminder of a tactic — attacking unions — that had defined the ascent of Mussolini and his supporters.

“It was a sign they sent,” said Berizzi. “‘Look, we’re not just yelling on social media, we are for real.’”