Yellen wanted this to be the best of all possible worlds, but the best world she could conceive of was terrible. 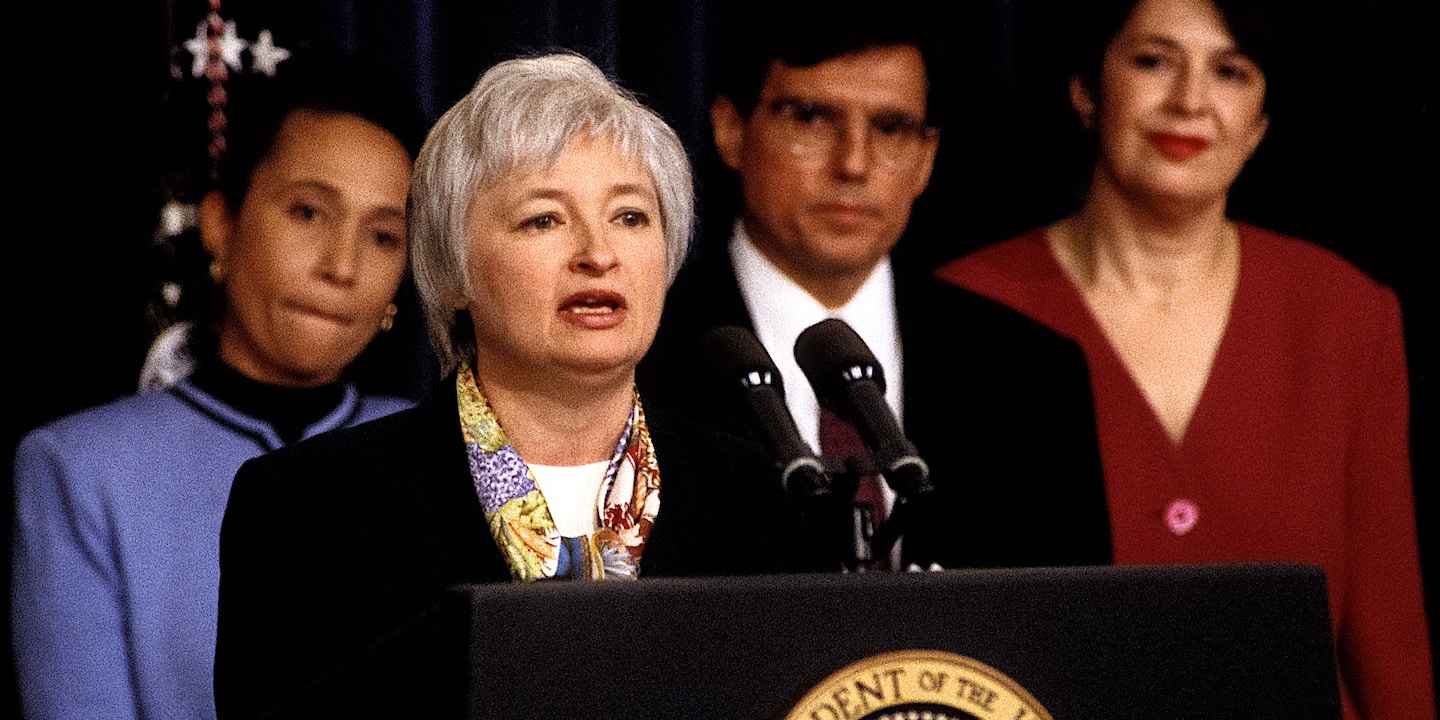 In June 1996, Janet Yellen — then a member of the Federal Reserve Board of Governors, later chair of the Fed herself, and currently secretary of the Treasury — wrote an extraordinary memo to then-Fed Chair Alan Greenspan. Anyone who wants to understand how the world works should read it, and thank Tim Barker, a historian who obtained it via the Freedom of Information Act.

Through a FOIA request, I got my hands on Janet Yellen's 1996 memo offering a theoretical explanation of why the decline workers bargaining power might allow for easier monetary policy. You can download the memo here: https://t.co/RiWpRNwczZ

What makes the memo so telling is threefold.

First, while expressed in abstruse technical language, it shares a perspective with the most radical left-wing critiques of capitalism. Yellen goes 90 percent of the way to proclaiming, “The history of all hitherto existing society is the history of class struggles.”

Second, Yellen is not, of course, calling for a proletarian revolution. Rather, as Noam Chomsky has pointed out, “vulgar Marxist rhetoric is not untypical of internal documents in the government,” just “with values reversed.” In Yellen’s case, she is making the case for, as she writes, the positive “impact of heightened job insecurity.” A rise in worker insecurity in the mid-1990s meant everyone was too scared to ask for raises, which meant businesses wouldn’t need to hike prices, which meant even with the falling unemployment at the time, the Fed didn’t need to raise interest rates to slow the economy and throw people out of work.

Third, Yellen is not a monster. Indeed, from the perspective of regular Americans, she’s about as good as it gets at the summit of power. The problem, for those of us down here on the ground, is her overall worldview. She might personally want things to be nicer but is certain the science of economics places incredibly sharp limits on the possible, and all we can do is try to make small improvements within those limits.

The memo is titled “Job Insecurity, the Natural Rate of Unemployment, and the Phillips Curve.” Barker learned of it from references in the books “Maestro” by Bob Woodward and “Empathy Economics” by Owen Ullmann. Greenspan distributed the memo to the entire Federal Open Market Committee, or FOMC — the group that decides interest rates — and it worked. As Ullmann puts it, “Yellen rescued Greenspan from his tight spot.”

Here’s the context in which Yellen was writing.

By mid-1996, unemployment had fallen to 5.3 percent. To understand the significance of this, it’s necessary to understand the standard economics model at the Fed (and the other centers of U.S. powers). There is, they believe, an inescapable trade-off between unemployment and inflation: If unemployment gets low, workers across the economy will have the bargaining power to bid up their wages, which will cause unstoppable inflation, which a few steps later will cause the rise of another Hitler. (Germany’s hyperinflation during the 1920s is generally believed to be one reason the country was open to extreme leadership.) You might think it would be nice for everyone to have jobs and good pay, but that just shows you are naïve and/or a Nazi.

Therefore, as previous Fed Chair William McChesney Martin said in 1955, the job of the Federal Reserve is to be “the chaperone who has ordered the punch bowl removed just when the party was really warming up.” They can’t let unemployment get too low, or the party will get out of hand.

With this in mind, the economics profession has developed a concept called the non-accelerating inflation rate of unemployment, or NAIRU. If you’re searching for it online, resist Google’s desire to instead search for “Nauru,” which is not an economic theory but rather a tiny island nation in Micronesia.

In 1996, NAIRU proponents generally agreed it was somewhere around 6 percent. Below that lay spiraling inflation, fascism, etc. It was therefore time for the Fed to get started slowing the economy. As Ullmann describes it, members of the FOMC were “prodding Greenspan to raise interest rates right away.” But Greenspan was resisting this; no one knew for sure where the NAIRU was.

This quasi-liberal stance was remarkable, given that Greenspan was an acolyte of Ayn Rand. In 1957, the New York Times published a letter from Greenspan in which he declared that her novel “Atlas Shrugged” was “a celebration of life and happiness. Justice is unrelenting. Creative individuals and undeviating purpose and rationality achieve joy and fulfillment. Parasites who persistently avoid either purpose or reason perish as they should.”

But Greenspan’s rationale was not that higher inflation was OK. Rather, as he eventually explained, “greater worker insecurity” had made possible a “healthy economic performance” with both low inflation and lower unemployment. This increased worker insecurity, he believed, could be measured by surveys finding that in 1991, in the middle of a recession, 25 percent of workers agreed with the statement, “I am frequently concerned about being laid off” — yet five years later, with far lower unemployment, 46 percent did.

Yellen’s memo was an attempt to provide intellectual support for Greenspan’s belief that increased worker insecurity could coexist with low unemployment. She writes in the memo that “unemployment serves as a worker-discipline device.” Therefore, even with low overall rates of unemployment, “an increase in job insecurity due to changing technology or other factors could induce a permanent decline in the natural rate of unemployment, along with a reduction in real wages and an increase in the markup of prices over unit labor costs.” (The “natural rate of unemployment” is related to but not exactly the same thing as the NAIRU.) And as Yellen describes it, there were several plausible ways in which the U.S. economy had changed structurally that could increase job insecurity.

Baked into the economy, Yellen says, is class conflict. “Real wage bargains,” she explains, “depend on the size of the ‘surplus’ available to be split between workers and shareholders. The bargaining power of each side determines the share of the surplus that it can extract. Bargaining power, in turn, depends on each side’s outside opportunities. As unemployment declines, other things equal, labor’s bargaining power rises, resulting in higher real wage settlements.”

But other things are not always equal, because there are factors beyond the unemployment rate that can “translate into a decline in workers’ bargaining power.”

“Improvements in the ability of firms to outsource production — domestically or internationally — [and] new labor-saving technology,” according to Yellen, “improve management’s options and serve as a threat to workers. Even if management does not actually use these options, their availability lowers workers’ bargaining power.” She does not mention the North American Free Trade Agreement, which had entered into force just a few years earlier in 1994, but this was surely part of the dynamic she describes.

All of these points have of course been made repeatedly by various critics of capitalism. So it is quite something to hear them in Yellen’s voice, even if she is presenting them as having positive effects.

And that’s the most important thing to understand about the Yellen memo. In her view of how economics works, the insecurity that working people hate is positive for everyone, including them, because this is the best we can do without provoking catastrophe. But is she right?

To start with, is a somewhat higher level of inflation truly such a terrifying specter? Creditors hate inflation because it causes their financial assets to decline in real value. But most people might prefer that if jobs are plentiful and wages aren’t falling behind inflation (although that, of course, can happen).

Beyond that, does increased worker power necessarily lead to higher inflation? Perhaps firms could avoid increasing prices by reducing profits or executive salaries. Maybe employees would be willing to forgo higher pay in exchange for a voice in how work is organized. Certainly they’d be concerned about raising the price of their company’s product if they owned the company. Everyone would also be worried more about inflation decreasing the value of financial assets if they had more such financial assets.

But Yellen’s conventional mind will never ask such questions, and no one with a more flexible imagination will ever sit in the Treasury secretary’s chair. (Tellingly, here in 2023, she is expressing no interest in creative measures such as minting a $1 trillion platinum coin to prevent the GOP-controlled Congress from driving the U.S. government into a pointless, catastrophic default.) Her memo is a compelling demonstration that there are people at the top who are trying to make this the best of all possible worlds, but the best world they can conceive of is still terrible.