The vast bulk of the commentary issuing from American commentators about the Russian military action in Ukraine involves condemning exactly that which they routinely advocate and which the U.S. itself routinely does.

The vast bulk of the commentary issuing from American commentators about the Russian military action in Ukraine involves condemning exactly that which they routinely advocate and which the U.S. itself routinely does. So suffocating is the resulting stench that those who played leading roles in selling the public the attack on Iraq and who are still unrepentant about it, such as David “Axis of Evil/The Right Man” Frum, have actually become the leading media voices condemning Russia on the ground that it is wrong to invade sovereign countries; Frum thus has no trouble saying things like this with an apparently straight face: “If Russia acts the outlaw nation, can it be expected to be treated as anything but an outlaw?”

Enthusiastic supporters of a wide range of other U.S. interventions in sovereign states, both past and present and in and out of government, are equally righteous in their newfound contempt for invasions – when done by Russia. Secretary of State John Kerry – who stood on the Senate floor in 2002 and voted to authorize the invasion of Iraq because “Saddam Hussein [is] sitting in Baghdad with an arsenal of weapons of mass destruction” and there is “little doubt that Saddam Hussein wants to retain his arsenal of weapons of mass destruction” – told Face the Nation on Sunday: “You just don’t in the 21st Century behave in 19th Century fashion by invading another country on completely trumped-up pretext.” The supremely sycophantic Face the Nation host Bob Schieffer – as he demanded to know how Russia would be punished – never once bothered Kerry (or his other Iraq-war-advocating guests, including Defense Secretary Chuck Hagel and Washington Post columnist David Ignatius) by asking about any of that unpleasantness (is it hard at all for you to sermonize against invasions of sovereign countries given, you know, how often you yourself support them?)

American invasions and occupations of nations halfway around the world are perfectly noble, but Russian interference in a part of a country right on its border is the supreme act of lawless, imperial aggression. Few things are worse than watching America’s militarists, invasion-and-occupying-justifiers, regime-change enthusiasts, drone-lovers, and supporters of its various “kinetic military actions” self-righteously wrap themselves in the banner of non-intervention, international law and respect for sovereignty. Does anyone take those denunciations seriously outside of the class of western elites who disseminate them?

For all the self-celebrating American journalists and political commentators: was there even a single U.S. television host who said anything comparable to this in the lead-up to, or the early stages of, the U.S. invasion of Iraq? Even now, how many American TV hosts on the major networks and cable outlets report on the types of American killings described in the first three paragraphs of this interview with Hamid Karzai, or the ongoing extinguishing of innocent human lives by President Obama’s drone attacks, or the pervasive chaos and suffering left in the wake of the NATO intervention in Libya that they almost universally cheered, or the endless brutality of the West Bank occupation and Gaza domination by the U.S.’s closest Middle East ally, or, for that matter, U.S./EU interference in the very same country that Russia is now condemned for invading? As political science professor As’ad AbuKhalil put it yesterday after listening to Obama’s condemnation of Russia:

This is what imperialism is all about: to give yourself the right to intervene in far away places and to project power in every corner of the globe, including the arctic, and to disregard world public opinion. Imperialism is to have the temerity to lecture and hector Russia about the evils of intervention in the affairs of its neighbor, Ukraine, where the U.S. and EU are blatantly conspiring against Russian interests there. . . . Obama sends drones around the world to kill people, including Americans, who have never been put on trial and yet sounds like a peaceful dove when offering lessons to Russia. Basically the U.S. is objecting to attempts by Russia to play a smaller and even far less aggressive version of its own world game.

When that sort of commentary and reporting appears frequently on major American television outlets, American celebration of its own “free press” can be taken seriously. Or, put another way, until hosts of major U.S. television programs do what Abby Martin just did on RT in connection with a major American military intervention, American commentators’ self-justifying mockery of Russian media outlets will continue to be as persuasive as the condemnation of Russian imperialism and aggression from the David Frums of the world.

UPDATE: The official RT account on Twitter seems perfectly proud of Martin’s statements, as they re-tweeted my commentary about her monologue condemning Russia’s actions: 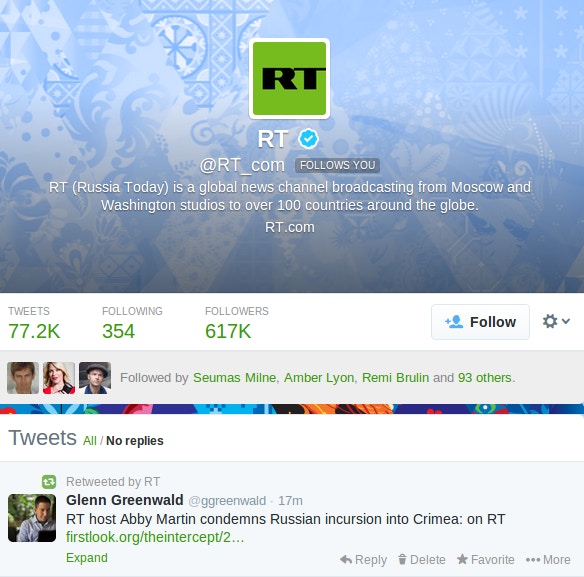 UPDATE II: In response to my question about whether any U.S. television hosts issued denunciations of the attack on Iraq similar to what Martin just did on RT, Washington lawyer Bradley Moss replied: “Phil Donahue (MSNBC) and Peter Arnett (NBC).”

Leaving aside that Arnett wasn’t a host, this perfectly proves the point I made, since both Donahue and Arnett were fired because of their opposition to the U.S. war. Arnett was fired instantly by NBC after he made critical comments about the war effort on Iraqi television, while a memo from MSNBC executives made clear they were firing Donahue despite his show being the network’s highest-rated program because he would be “a difficult public face for NBC in a time of war”.

During that same time, MSNBC’s rising star Ashleigh Banfield was demoted and then fired after she delivered a stinging rebuke of misleading pro-war TV coverage by U.S. outlets, while Jessica Yellin, at MSNBC during the time of the war, admitted in 2008 that “the press corps was under enormous pressure from corporate executives, frankly, to make sure that this was a war that was presented in a way that was consistent with the patriotic fever in the nation and the president’s high approval ratings” and that executives would change stories to make them more pro-war.

All of that stands in rather stark contrast to the clear denunciation of the Russian intervention by Martin which RT broadcast and this morning is promoting. We’ll see if she suffers any recriminations, but if she does, U.S. media behavior during the attack on Iraq was hardly any better.