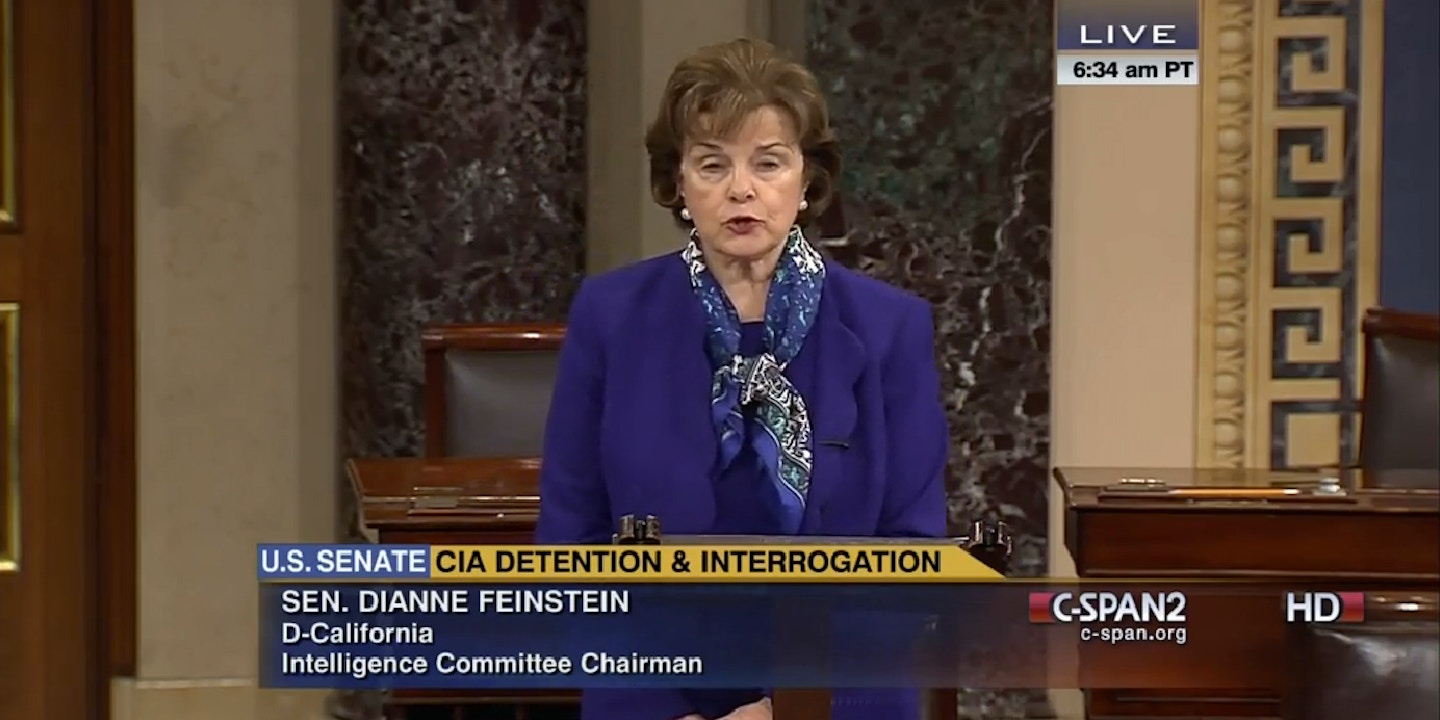 Intelligence Committee chair Dianne Feinstein (D-Calif.), in a floor speech (transcript; video) that Judiciary Committee chair Patrick Leahy (D-Vt.) immediately called the most important he had heard in his career, said the CIA had searched through computers belonging to staff members investigating the agency’s role in torturing detainees, and had then leveled false charges against her staff in an attempt to intimidate them.

“I have grave concerns that the CIA’s search may well have violated the separation of powers principle embodied in the United States Constitution, including the speech and debate clause,” she said. “It may have undermined the constitutional framework essential to effective congressional oversight of intelligence activities or any other government function.”

She concluded: “The recent actions that I have just laid out make this a defining moment for the oversight of our intelligence community. How Congress responds and how this is resolved will show whether the Intelligence Committee can be effective in monitoring and investigating our nation’s intelligence activities, or whether our work can be thwarted by those we oversee. I believe it is critical that the committee and the Senate reaffirm our oversight role and our independence under the Constitution of the United States.”

She also accused the CIA of obstructing her committee’s torture inquiry in general, and of disputing findings that its own internal inquiry had substantiated.

The document at the heart of this confrontation is an internal review conducted by the CIA of the materials it had turned over to Feinstein’s committee during the course of the four-year congressional investigation into the Bush-era torture practices.

Feinstein said the document, which has become known as the Panetta Review after then-director of the CIA Leon Panetta, was first discovered by committee staff using CIA-provided search tools in 2010. It became particularly relevant later, after the committee completed a scathing 6,300-page report in December 2012, and the CIA sent its official response in June 2013.

The committee’s detailed report is still classified, but it is known to be highly critical of both the CIA’s role in the torture regime and its campaign to deceive Congress about it. The CIA vehemently took issue with those conclusions.

“Unlike the official response, these Panetta review documents were in agreement with the committee’s findings. That’s what makes them so significant and important to protect,” Feinstein said.

Based on the CIA’s extensive record of removal and destruction of evidence, which Feinstein detailed in her floor speech, committee staff decided “there was a need to preserve and protect” a copy of the review, which meant bringing it back from the CIA-leased offices in Virginia where staff had been forced to conduct their investigation to secure facilities in a Senate office building.

Feinstein said that a month later, John Brennan, the current director of the CIA, informed her that CIA personnel had conducted a search of the committee’s computers in the Virginia facility, including the standalone network that contained the committee staff’s own internal work product and communication.

The senator was outraged, she said, and fired off a letter expressing her concerns that the action was illegal and unconstitutional.

“I have asked for an apology and a recognition that this CIA search of computers used by its oversight committee was inappropriate. I have received neither,” she said.

“Besides the constitutional implications, the CIA search may also have violated the Fourth Amendment, the Computer Fraud and Abuse Act, as well as Executive Order 12333, which prohibits the CIA from conducting domestic searches or surveillance.”

Feinstein said she later learned that the CIA’s own inspector general had made a criminal referral to the Justice Department regarding the search of the congressional computers by CIA personnel.

But what seemed to really set her off was the CIA’s counter-charge, made through acting CIA general counsel Robert Eatinger, that her staff had illegally accessed and removed the document.

“Our staff involved in this matter have the appropriate clearances, handled this sensitive material according to established procedures and practice to protect classified information, and were provided access to the Panetta Review by the CIA itself,” she said.

“As a result, there is no legitimate reason to allege to the Justice Department that Senate staff may have committed a crime. I view the acting counsel general’s referral as a potential effort to intimidate this staff, and I am not taking this lightly.”

She added: “I should note that for most if not all of the CIA’s detention and interrogation program, the now-acting general counsel was a lawyer in the CIA’s counterterrorism center, the unit within which the CIA managed and carried out this program. From mid-2004 until the official termination of the detention and interrogation program in January 2009, he was the unit’s chief lawyer. He is mentioned by name more than 1,600 times in our study.

Feinstein’s fighting words were in stark contrast to her role as a champion of NSA surveillance. In most cases, Feinstein has served as an example of how badly oversight over the intelligence community has failed, serving as an accessory to the very kind of excesses her committee was established, in the 1970s,  to prevent.

But torture has been the exception for Feinstein, who in stark contrast to President Obama has demanded an authoritative, official accounting of what happened during the Bush years.

Feinstein made it clear that she is eager for her committee’s report to become public. “If the Senate can declassify this report, we will be able to insure than an un-American, brutal program in interrogation and distension will never again be permitted.”

When Feinstein concluded, Leahy called for dramatic action. “We are supposed to be the conscience of the nation,” he said of the Senate. “Now let’s stand up for this country.”

In a statement, Leahy later continued: “This is not just about getting to the truth of the CIA’s shameful use of torture. This is also about the core founding principle of the separation of powers, and the future of this institution and its oversight role. The Senate is bigger than any one Senator. Senators come and go, but the Senate endures. The members of the Senate must stand up in defense of this institution, the Constitution, and the values upon which this nation was founded.”

Brennan, in remarks at a Council on Foreign Relations, said the CIA wants to put the torture controversy behind it. “Even as we learn from the past, we must also be able to put the past behind us.”

Misrepresenting Feinstein’s charge as one of CIA “hacking”, he denied it. “Nothing could be further from the truth,” he said. “We wouldn’t do that. That’s beyond the scope of reason.”

And he said he would leave it to the Justice Department to sort out the dueling referrals, and figure out who was in the wrong.

We are outraged by Senator Feinstein’s description of repeated efforts by the CIA to thwart critical and legitimate congressional oversight through delays, attacks, intimidation and attempts to conceal. This is not a partisan issue. Such conduct strikes at the heart of our nation’s constitutional system of separation of powers.

This is truly a defining moment, not only for congressional oversight of the intelligence community, but also for President Obama’s legacy on torture. The White House cannot allow the CIA to drive this process any longer. The president must ensure that the committee’s report is declassified to the fullest extent possible, as well as the CIA’s response to the committee’s study and the so-called Panetta review. But President Obama should not stop there; he should declassify the rendition, detention and interrogation program itself.

The actions the chairman outlined are the latest events that illustrate why I directly pushed CIA Director Brennan to acknowledge the flaws in and misrepresentations about the CIA’s brutal and ineffective detention and interrogation program. Unfortunately, the CIA responded by trying to hide the truth from the American people about this program and undermine the Senate Intelligence Committee’s oversight role by illegally searching committee computers. The U.S. Constitution is clear and Coloradans agree: The separation of powers and aggressive oversight are fundamental to our democracy, and Coloradans can count on me to continue to protect these foundational pillars no matter who is in the White House.

I commend Chairman Feinstein for shining a light on the unprecedented invasion by the CIA into computers used by Senate Intelligence Committee investigators.  The CIA’s own recent court filing makes clear that the work product on these computers was and is ‘the property of the Committee.’ I share her concern that this search may have violated both federal law and the US Constitution.  In addition to the grave implications for the Constitutional separation of powers, I am extremely troubled that the CIA leadership has neither responded to specific questions about this search nor even acknowledged that it was inappropriate.  This is simply not acceptable in a democracy.

I will continue to support Chairman Feinstein’s efforts to get more answers and accountability from the CIA about this search.  In my judgment, the Intelligence Community leadership’s misleading statements on interrogation and many other issues has undermined their credibility. I will continue to work with my colleagues to ensure that the facts about the CIA’s detention and interrogation program are made public, so that the American people can make up their own minds about what happened and prevent the mistakes of the past from being repeated.

White House spokesman Jay Carney, meanwhile, said “The president has great confidence in John Brennan and confidence in our intelligence community and in our professionals at the CIA.”