A Night in Ferguson: Rubber Bullets, Tear Gas, and a Jail Cell 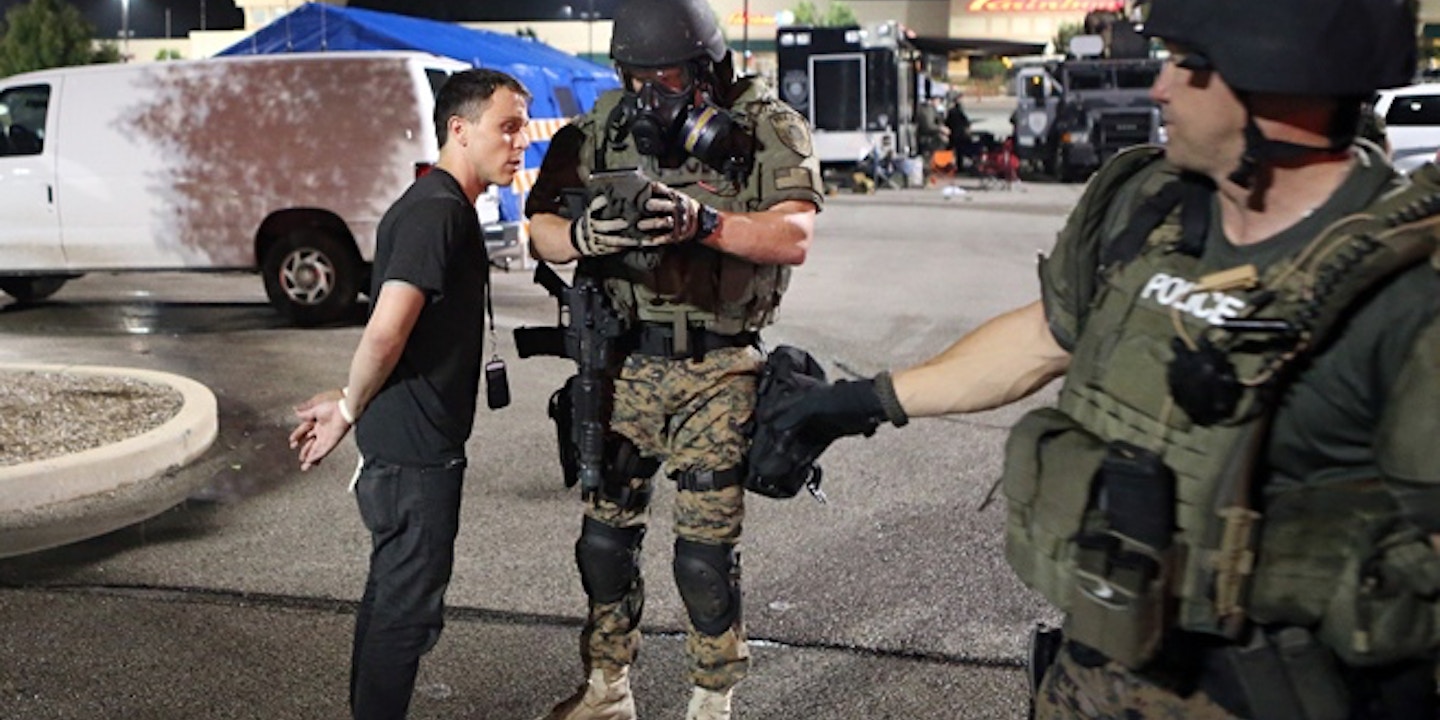 Late Monday evening, after many of the major media outlets covering the protests in Ferguson, Mo., had left the streets to broadcast from their set-ups near the police command center, heavily armed officers raced through suburban streets in armored vehicles, chasing demonstrators, launching tear gas on otherwise quiet residential lanes, and shooting at journalists.

Their efforts resulted in one of the largest nightly arrest totals since protests began 10 days ago over the killing of unarmed African American teenager Michael Brown by white Ferguson police officer Darren Wilson. At approximately 2 a.m. local time, Missouri Highway Patrol Capt. Ron Johnson announced at a press conference that 31 people had been arrested over the course of the night (NBC News later reported that, according to jail records, the actual total was more than double that). I was unable to attend or report on Johnson’s press conference because I was one of those people.

At roughly midnight, protesters and journalists were gathered on W. Florissant Ave., which has been ground zero for the ongoing protests. After laying down a heavy cloud of tear gas, police officials began announcing over loudspeakers that they intended to clear the area, citing a “public safety issue.” When some reporters pressed for clarification, multiple senior officers referred to “shots fired,” though they offered no specifics. The cable news crews on the street broke their gear down and left, as did just about everybody else.

Lukas Hermsmeier, a German reporter for Bild, and I got into the rental car we were sharing and decided to make our way to the so-called “command center” authorities have set up for journalists in the parking lot of a nearby Target. After picking up a stranded journalist and giving him a ride to his car, we found ourselves looking for a quick route to the command center that didn’t require driving along the contested W. Florissant. As we worked our way through the neighborhood’s side streets, we noted that a small contingent of protesters had returned.

Crossing W. Florissant, I heard a police officer announce over a loudspeaker: “This is your final warning.” My first instinct was to pull the car over and document whatever was about to happen. In protests, the most severe instances of violence or unlawful arrest often occur after the cameras are gone. We parked the car and got out.

There were roughly two dozen rowdy protesters gathered in the middle of W. Florissant, and along its east side. They had their own megaphone, which they were using to taunt the police. It was clear that some had been drinking. One of them lit a barrel of garbage on fire. A pair of streets signs had been pulled from the ground. At least one threw a glass bottle, which landed far from the officers roughly a block and a half down the road.

On the other side of W. Florissant, meanwhile, a separate group of protesters had gathered, all wearing matching T-shirts. They were clearly displeased with the behavior of their counterparts on the other side of the road. One particularly vocal young woman from this group stepped out into the street to retrieve the signs they had pulled out of the ground and left in the road. I crossed W. Florissant to see if I could interview her.

We were on the sidewalk chatting when the police began firing tear gas canisters in our direction. The woman and her friends began hustling to safety, away from W. Florissant and away from our rental car. I followed her, continuing to ask questions as we hurried onto Gage Dr., which runs parallel to W. Florissant. The young woman and her friends decided it was unsafe, hopped in a car, and took off. The author being transferred to a police van at the Ferguson command center early this morning. Photo: David Carson/St Louis Post Dispatch/Polaris

Hermsmeier and I were stuck. The police had begun moving up W. Florissant in their armored vehicles. They continued shooting off gas canisters. In between short lulls, the remaining rowdy protesters would dart out from the shadows to egg the police on. I wanted to know what the police were firing at people so I looked for evidence. I found a smoking, hot canister and took a photo of it during a break in the firing.

The road, and seemingly the entire subdivision, was quickly filling with smoke. Armored vehicles would speed up to our area, occasionally shooting tear gas as they went, and we would take cover behind anything that could stop a metal canister from slamming into our skulls.

The situation did not look or feel good. Hermsmeier and I had a wide street filled with tear gas and armored vehicles between us and our ride home. The police began turning off W. Florissant and opening fire with gas canisters at unseen targets in the dense residential area. At one point, one of the canisters appeared to start a small fire in the driveway of a home.

We decided our best bet was to walk north on Gage Dr. in hopes of getting beyond the wall of gas and finding a safe route to our car. We didn’t make it far. Between the gaps in the houses we could see the armored vehicles quickly moving up and down W. Florissant, parallel to us. Two turns and the police would find us off that main road and, potentially, shoot at us. We took cover behind a large tree in case the firing started again.

It was then that one of the armored vehicles entered the neighborhood once more, this time ahead of us, slowly moving in the direction we were walking. With their high-powered lights scanning the neighborhood, the only option we had was to announce ourselves as members of the press and hope they wouldn’t shoot. We stepped out of the shadows, our hands in the air, and began yelling, “Press!” and “Journalists!” and “We’re media!” over and over. An officer on top of the vehicle turned his light on us. After a pause, he beckoned us forward. We continued walking, our hands still in the air, still shouting that we were journalists.

With rifles trained on us, we turned right on Highmunt Dr., in the direction of W. Florissant and toward another police vehicle, which had more guns pointed at us. As we made our way forward, I heard a pop and felt a stinging in my lower back. I jumped up instinctively, and realized that the officers behind us, the ones who had asked us to move forward, had shot us with what I believe were rubber bullets. I was hit once and Hermsmeier was hit twice.

The shooting left a mean bruise, but all the guns trained on us provided an ample distraction from the sting. We were frightened. The police, who made no verbal commands that we had heard, had clearly demonstrated their willingness to shoot us. With several similarly armed and approaching officers directly in front of us, we dove behind a car, expecting more shooting. The police came upon us with their guns pointed directly at us. We continued repeating that we were journalists. They pulled us out from behind the car, walked us to their armored vehicles, and zip-tied our hands behind our backs.

The police loaded us a vehicle known as a Bearcat and drove us to the command center. We were sitting across from a massive man in a gas mask who looked more like a sci-fi video game character than a police officer. He asked us what we were doing out when police had told people to leave. We replied that we were doing our jobs.

It was at the command center, a suburban parking lot awash in neon light and men in camouflage, that we learned we were going to jail. No one read us our rights. I was later informed that we–along with just about everyone else in our jail cell–were arrested for “refusal to disperse.”

When we got to the jail, an officer took all my belongings and placed them in a bag, and told me that I was free to make my one phone call. When I told her that my lawyer’s phone number was in my wallet, she replied that it was too late (pro tip: write your lawyer’s phone number in Sharpie on your arm). The only way my editor learned that I had been arrested was because David Carson, a photographer with the St. Louis Post-Dispatch (who took the photographs in this post), happened to be embedded with the tactical team that arrested us. While we were at the command center, I asked him to post news of our arrests to his Twitter feed. (Thanks, David.)

We were jailed with a cross-section of the Ferguson protesters. Most of our cellmates were African American and from Ferguson or surrounding areas, though there were also some white men in the mix, too. There were three recently discharged veterans in our group and one active duty service member. I don’t know how many—if any—of the men I was in jail with had participated in the violent, destructive protesting that I saw. But far from being the hardened criminals some might paint them as, these young men—most of whom had never met before last night—offered support for each other. They were kind to one another.

There was a lot of humor in the group as well, though it was all colored by a below-the-surface recognition that, for a certain portion of the men, time spent in jail cells is an unavoidable fact of life. One of our cellmates, a young African American veteran who had been picked up protesting, was stuck in jail for a mandatory 72 hours due to an outstanding warrant from an illegal lane change. Ferguson relies heavily on court fees to generate revenue, and traffic stops are a key component.

Hermsmeier and I got out of jail this morning. None of the other people who are still there, as far as I know, work for well-funded, high-profile media organizations. Few are white. The concerns these men raised—and the intensity that they have for this moment in Ferguson—runs very deep. Several cited the disproportionate number of traffic stops of young men of color as a specific problem. On a more fundamental level, their grievances centered on a perceived lack of respect from the police sworn to protect their communities, a sense that anything could be done to them and nothing would be done in response. One young African American man from the area positively beamed at being arrested for a cause; he likened it to going to jail with Dr. Martin Luther King, Jr.

Not a single one of these men, through our hours of conversations, expressed any desire to let up. This will not end soon.