Our newspapers of record finally remembered it’s their job to point out the flaws in the president’s plan to defeat ISIS. 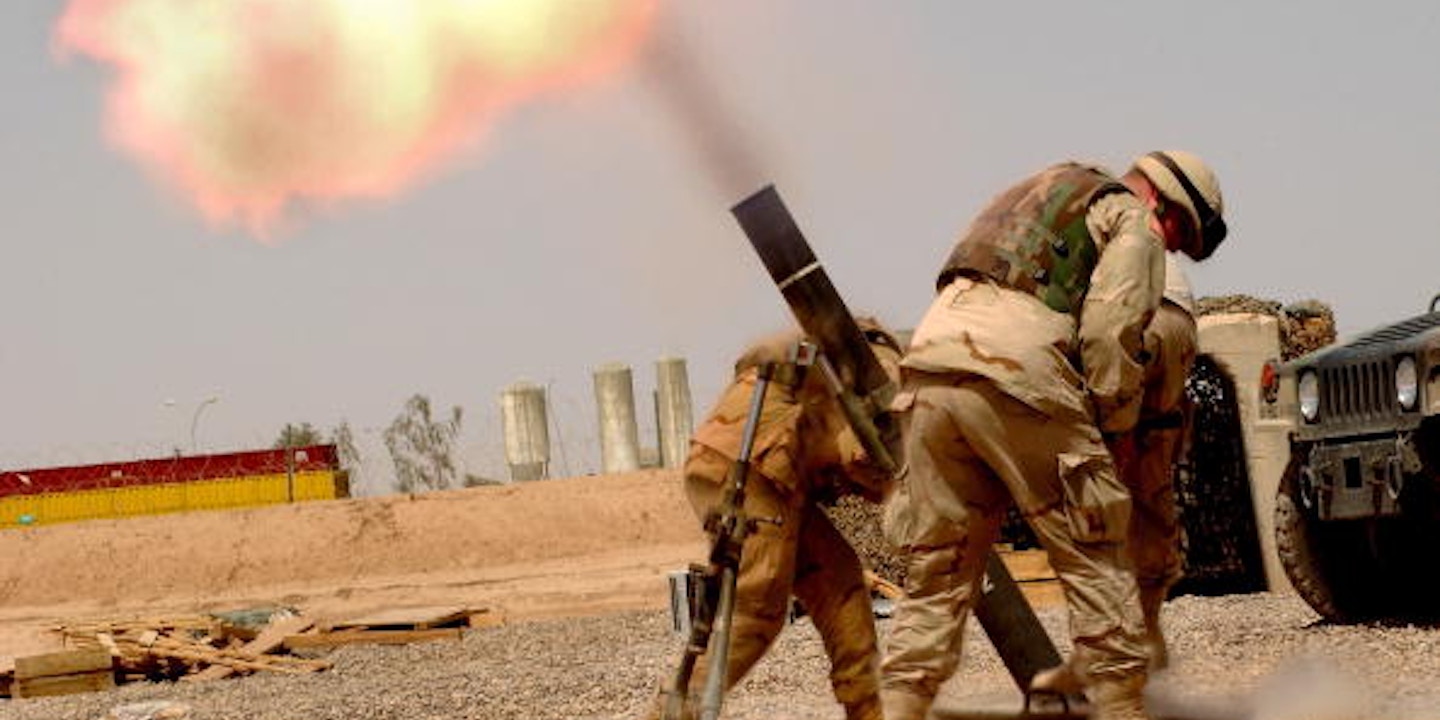 President Obama’s plan to “degrade and destroy” the Islamic State counts on pretty much everything going right in a region of the world where pretty much anything the U.S. does always goes wrong.

Our newspapers of record today finally remembered it’s their job to point stuff like that out.

The New York Times, in particular, calls bullshit this morning — albeit without breaking from the classic detached Timesian tonelessness.

Mark Mazzetti, Eric Schmitt and Mark Landler (with contributions from Matt Apuzzo and James Risen) start by pointing out the essential but often overlooked fact that “American intelligence agencies have concluded that [the Islamic State] poses no immediate threat to the United States.”

And then, with the cover of “some officials and terrorism experts,” they share a devastating analysis of all the coverage that has come before:

Some officials and terrorism experts believe that the actual danger posed by ISIS has been distorted in hours of television punditry and alarmist statements by politicians, and that there has been little substantive public debate about the unintended consequences of expanding American military action in the Middle East.

You’ve got to love these quotes:

Daniel Benjamin, who served as the State Department’s top counterterrorism adviser during Mr. Obama’s first term, said the public discussion about the ISIS threat has been a “farce,” with “members of the cabinet and top military officers all over the place describing the threat in lurid terms that are not justified.”

“It’s hard to imagine a better indication of the ability of elected officials and TV talking heads to spin the public into a panic, with claims that the nation is honeycombed with sleeper cells, that operatives are streaming across the border into Texas or that the group will soon be spraying Ebola virus on mass transit systems — all on the basis of no corroborated information,” said Mr. Benjamin, who is now a scholar at Dartmouth College.

(For a taste of alarmist statements by politicians, please read my recent post: The Congressional Hyperbole Caucus.)

A few paragraphs later, “some American officials” return, warning “of the potential danger of a prolonged military campaign in the Middle East, led by the United States” and saying “there are risks that escalating airstrikes could do the opposite of what they are intended to do and fan the threat of terrorism to American soil.”

The Times writers raise the very legitimate concern that Obama may be playing right into the Islamic State’s hands:

Even a limited air campaign could play into an ISIS narrative that American infidels were intervening on behalf of apostate governments in Iraq and Syria.

In the Washington Post this morning, Rajiv Chandrasekaran focuses on all the implausible things that have to go right beyond “U.S. bombs and missiles hitting their intended targets”:

In Iraq, dissolved elements of the army will have to regroup and fight with conviction. Political leaders will have to reach compromises on the allocation of power and money in ways that have eluded them for years. Disenfranchised Sunni tribesmen will have to muster the will to join the government’s battle. European and Arab allies will have to hang together, Washington will have to tolerate the resurgence of Iranian-backed Shiite militias it once fought, and U.S. commanders will have to orchestrate an air war without ground-level guidance from American combat forces.

“Figuring out where we can strike ISIL so that it weakens them and empowers a more moderate Sunni group instead of the government — you have to think that one through,” said Michele Flournoy, a former U.S. undersecretary of defense. “I’m not sure we know yet how to pull that off.”

And Chandrasekaran reports that Obama’s approach “was not the U.S. military’s preferred option.”

Responding to a White House request for options to confront the Islamic State, Gen. Lloyd Austin, the top commander of U.S. forces in the Middle East, said that his best military advice was to send a modest contingent of American troops, principally Special Operations forces, to advise and assist Iraqi army units in fighting the militants, according to two U.S. military officials. The recommendation, conveyed to the White House by Gen. Martin Dempsey, the chairman of the Joint Chiefs of Staff, was cast aside in favor of options that did not involve U.S. ground forces in a front-line role, a step adamantly opposed by the White House.

It’s a classic damned-if-you-do, damned-if-you-don’t scenario: “Supporters of the president’s approach” point out that putting U.S. ground troops in the lead would encourage the Iraqi soldiers to hang back, while “Austin’s predecessor, retired Marine Gen. James Mattis, says “the decision not to send ground troops poses serious risks to the mission.”

For a president criticized as overly cautious and reluctant to lead, Barack Obama is taking a huge risk. He is thrusting U.S. fighting forces into a growing military operation with clear dangers, unknown costs, an indefinite length and unpredictable consequences.

Meanwhile, AP colleagues Zeina Karam and Vivian Salama make the previously almost-unheard argument that maybe the Islamic State isn’t worth all the fuss. There “has been an inclination to exaggerate the group’s capabilities,” they write.

The Islamic State group is often described as the most fearsome jihadi outfit of all: a global menace outweighing al-Qaida, with armies trembling before its advance.

But while the group has been successful at seizing parts of Iraq and Syria, it is no unstoppable juggernaut. Lacking the major weaponry of an established military, it wields outsize influence through the fanaticism of a hard core of several thousand, capitalizing on divisions among its rivals, and disseminating terrifying videos on social media.

And they offer up some numbers:

Most analysts… estimate the number of Islamic State fighters in both Iraq and Syria to be about 20,000…

The Iraqi military and police force are estimated at more than 1 million. The Syrian army is estimated at 300,000 soldiers. There are believed to be more than 100,000 Syrian rebels, including the al-Qaida-linked Nusra Front and the powerful Islamic Front rebel umbrella group, currently fighting the Islamic State group in Syria. Tens of thousands of Kurdish Peshmerga forces are fighting the group in Iraq.

A cornerstone of the expanded U.S. military campaign against Islamic State militants will be reliance on U.S.-trained local forces to confront the group head on.

But good luck with that:

In Iraq, Libya, Afghanistan and elsewhere, results have been mixed at best in U.S. efforts to push local forces to the forefront of fights against extremists. U.S. military campaigns conducted with little or no local ground support—such as those in Pakistan and Yemen—have met with some success but have lasted for years. Success, officials and experts say, is especially difficult when American troops are prohibited from serving alongside local units on the front lines or without a yearslong U.S. presence to train, advise and mentor the partner forces.

There’s also that little problem of giving weapons and training to precisely the wrong people:

In Syria, officials have repeatedly raised the problem of adequately vetting rebels to ensure the people trained and armed by the U.S. don’t join the ranks of Islamic State. In Iraq, the U.S. believes that many of the Shiite-dominated military forces have been penetrated by Iranian agents.

The McClatchy Newspapers Washington bureau , finally no longer alone in expressing skepticism about Obama’s plans, goes all Buzzfeed with a Hannah Allam story: “5 potential pitfalls in Obama’s plan to combat the Islamic State“.

Allam notes that Yemen and Somalia are hardly examples of success; that the new Iraqi government is hardly “inclusive”; that training of Iraqi soldiers hasn’t worked in the past; that in Syria it’s unclear which “opposition” Obama intends to support; and that it may be too late to cut off the flow of fighters and funds.

Even USA Today gets into the game, with Jim Michaels pointing out some of the “risks” involved.

It’s great our leading mainstream news organization are finally pointing out the flaws of a president’s plan to bomb Iraq. Last time around, they waited until over a year after the invasion to suddenly pile on.

But nobody has the understanding of the region, the writing chops, and the moral standing of Andrew J. Bacevich, the Boston University political science professor and former Army colonel who lost his son in the Iraq war in 2007. He writes today for Reuters Opinion:

Even if Obama cobbles together a plan to destroy the Islamic State, the problems bedeviling the Persian Gulf and the greater Middle East more broadly won’t be going away anytime soon.

Destroying what Obama calls the Islamic State of Iraq and the Levant won’t create an effective and legitimate Iraqi state. It won’t restore the possibility of a democratic Egypt. It won’t dissuade Saudi Arabia from funding jihadists. It won’t pull Libya back from the brink of anarchy. It won’t end the Syrian civil war. It won’t bring peace and harmony to Somalia and Yemen. It won’t persuade the Taliban to lay down their arms in Afghanistan. It won’t end the perpetual crisis of Pakistan. It certainly won’t resolve the Israeli-Palestinian conflict.

All the military power in the world won’t solve those problems. Obama knows that. Yet he is allowing himself to be drawn back into the very war that he once correctly denounced as stupid and unnecessary — mostly because he and his advisers don’t know what else to do. Bombing has become his administration’s default option.

Rudderless and without a compass, the American ship of state continues to drift, guns blazing.