New Zealand began work on a program to intercept citizens’ metadata, according to NSA documents. 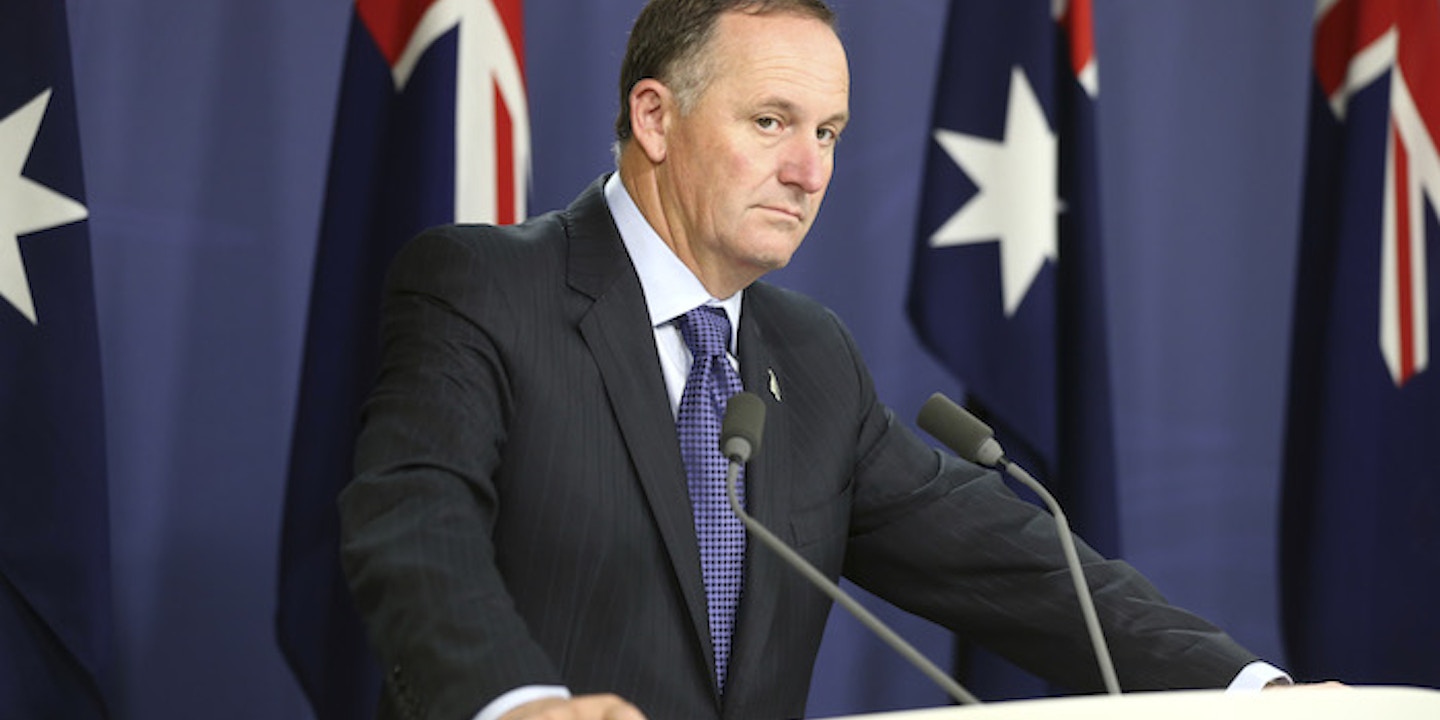 AUCKLAND, New Zealand—The New Zealand spy agency, the Government Communications Security Bureau (GCSB), worked in 2012 and 2013 to implement a mass metadata surveillance system even as top government officials publicly insisted no such program was being planned and would not be legally permitted.

Documents provided by NSA whistleblower Edward Snowden show that the government worked in secret to exploit a new internet surveillance law enacted in the wake of revelations of illegal domestic spying to initiate a new metadata collection program that appeared designed to collect information about the communications of New Zealanders. Those actions are in direct conflict with the assurances given to the public by Prime Minister John Key (pictured above), who said the law was merely designed to fix “an ambiguous legal framework” by expressly allowing the agency to do what it had done for years, that it “isn’t and will never be wholesale spying on New Zealanders,” and the law “isn’t a revolution in the way New Zealand conducts its intelligence operations.”

Snowden, in a post for The Intercept published today, accused Prime Minster Key of fundamentally misleading the public about GCSB’s role in mass surveillance. “The Prime Minister’s claim to the public, that ‘there is no and there never has been any mass surveillance’, is false,” the former NSA analyst wrote. “The GCSB, whose operations he is responsible for, is directly involved in the untargeted, bulk interception and algorithmic analysis of private communications sent via internet, satellite, radio, and phone networks.”

Snowden explained that “at the NSA, I routinely came across the communications of New Zealanders in my work with a mass surveillance tool we share with GCSB, called ‘X KEYSCORE.”” He further detailed that “the GCSB provides mass surveillance data into XKEYSCORE. They also provide access to the communications of millions of New Zealanders to the NSA at facilities such as the GCSB facility in Waihopai, and the Prime Minister is personally aware of this fact.”

Top secret documents provided by the whistleblower demonstrate that the GCSB, with ongoing NSA cooperation, implemented Phase I of the mass surveillance program code-named “Speargun” at some point in 2012 or early 2013. “Speargun” involved the covert installation of “cable access” equipment, which appears to refer to surveillance of the country’s main undersea cable link, the Southern Cross cable. This cable carries the vast majority of internet traffic between New Zealand and the rest of the world, and mass collection from it would mark the greatest expansion of GCSB spying activities in decades.

Upon completion of the first stage, Speargun moved to Phase II, under which “metadata probes” were to be inserted into those cables. The NSA documents note that the first such metadata probe was scheduled for “mid-2013.” Surveillance probes of this sort are commonly used by NSA and their partners to tap into huge flows of information from communication cables in real time, enabling them to extract the dates, times, senders, and recipients of emails, phone calls, and the like. The technique is almost by definition a form of mass surveillance; metadata is relatively useless for intelligence purposes without a massive amount of similar data to analyze it against and trace connections through.

The NSA declined to comment for this story. A GCSB spokesperson would only say: “We don’t comment on matters that may or may not be operational.”

Over the weekend, in anticipation of this report, Key admitted for the first time that the GCSB did plan a program of mass surveillance aimed at his own citizens, but claimed that he ultimately rejected the program before implementation. Yesterday, after The Intercept sought comment from the NSA, the Prime Minister told reporters in Auckland that this reporting was referring merely to “a proposed widespread cyber protection programme that never got off the ground.” He vowed to declassify documents confirming his decision.

But the documents indicate that Speargun was not just an idea that stalled at the discussion stage. It was a system GCSB actively worked to implement. One top secret 2012 NSA document states: “Project Speargun underway.” Another top secret NSA document discussing the activities of its surveillance partners reports, under the heading “New Zealand,” that “Partner cable access program achieves Phase I.” 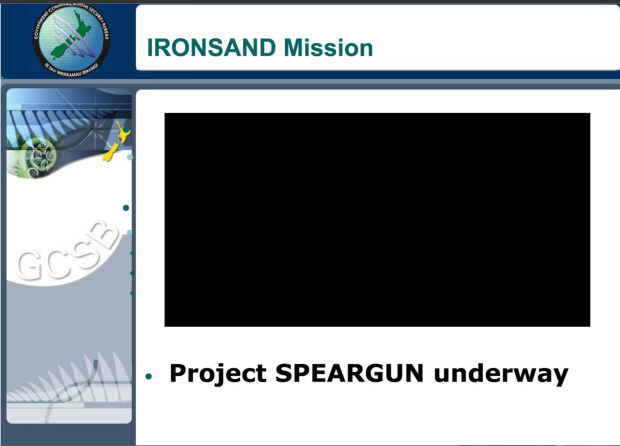 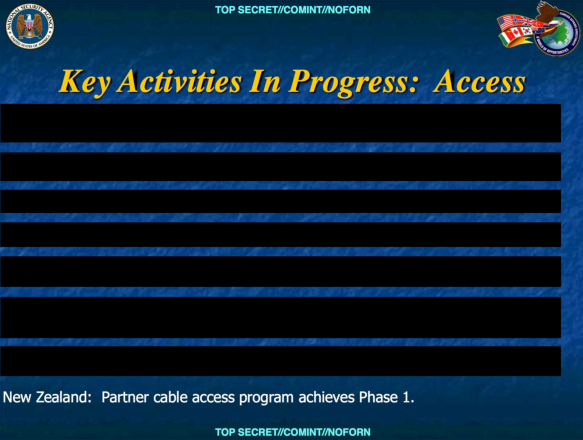 Critically, the NSA documents note in more than one place that completion of Speargun was impeded by one obstacle: The need to enact a new spying law that would allow the GCSB, for the first time, to spy on its own citizens as well as legal residents of the country. As one NSA planning document put it, completion of Speargun was “awaiting new GCSB Act expected July 2013.”

That legislation arose after it was revealed in 2012 that the GCSB illegally surveilled the communications of Megaupload founder Kim Dotcom, a legal resident of New Zealand. New Zealand law at the time forbade the GCSB from using its surveillance apparatus against citizens or legal residents. That illegal GCSB surveillance of Dotcom was followed by a massive military-style police raid by New Zealand authorities on his home in connection with Dotcom’s criminal prosecution in the United States for copyright violations.

A subsequent government investigation found that the GCSB not only illegally spied on Dotcom but also dozens of other citizens and legal residents. The deputy director of GCSB resigned. The government’s response to these revelations was to refuse to prosecute those who ordered the illegal spying and, instead, to propose a new law that would allow domestic electronic surveillance.

That proposal was intensely controversial, prompting large public protests and a concerted campaign against the law. One news broadcaster called it “one of the most polarizing pieces of legislation in recent times.” It was of sufficient interest to the NSA that in March 2013, the director of Prime Minister Key’s Intelligence Coordination Group traveled to NSA headquarters to offer an update on the legislation.

To assuage the public, Key and other top officials repeatedly insisted that the real purpose of the law was merely to provide oversight and to clarify that targeted domestic surveillance which had long been carried out by the agency was legal. Key categorically denied that the law would allow mass metadata collection on the New Zealand public: “There have been claims this Bill offers no protection of metadata and allows for wholesale collection of metadata without a warrant. None of that is true.”

Key told the public that the new law would not permit mass, warrantless metadata surveillance: “So when the GCSB wants to access metadata, it is treated with the same level of seriousness and protection as if the GCSB was accessing the actual content of a communication. And there are protections around that.”

In response to Key’s claims, legal experts extensively documented that the new law would indeed provide “a major increase in the overall role and powers of the GCSB” and would allow the “very broad ‘wholesale’ powers” which Key denied. Yet the Key government, and the prime minister himself, steadfastly insisted that the law permits no mass surveillance. At one point, Key even promised to resign if it were found that the GCSB were engaging in mass surveillance.

Based on Key’s assurances, the New Zealand Parliament narrowly voted to enact the new law on August 21 of last year, by a vote of 61-59. Immediately prior to passage, Key acknowledged that the new law has “‘alarmed’ some people but blame[d] the Government’s opponents for stoking their fears” and again “rejected that by writing into law what the GCSB had already been doing meant an extension of its powers.”

But in high-level discussions between the Key government and the NSA, the new law was clearly viewed as the crucial means to empower the GCSB to engage in metadata surveillance. On more than one occasion, the NSA noted internally that Project Speargun, in the process of being implemented, could not and would not be completed until the new law was enacted. The NSA apparently viewed that new law as providing exactly the powers that Key repeatedly and publicly denied it would vest.

New Zealand’s national election will be held on September 20. Over the last several weeks, Key has been embroiled in a scandal that saw a top minister resign, after independent journalist Nicky Hager published a book, Dirty Politics, documenting ties between Key officials and a right-wing blogger known for attacking public figures and showing that Key officials declassified information for political purposes.

Revelations of illegal GCSB spying prompted the creation of the anti-surveillance Internet Party, which formed an alliance with the left-wing, indigenous Mana Party and is predicted to win several seats in Parliament. The party is funded by Dotcom, and has organized a “Moment of Truth” event for this Monday to discuss revelations of surveillance and other secret government actions. (Disclosure: Glenn Greenwald, one of the authors of this story, is scheduled to speak at that event pursuant to an invitation from the Internet Party, which paid his travel expenses to attend and agreed to donate a speaking fee to a designated charity.)

The disclosure that the GCSB plotted a program of mass surveillance based on this new law is likely to raise further questions about the ethics and credibility of the Key government. The new surveillance planning took place at high levels of the government, and expressly intended to use the new surveillance law as its basis even as Key himself insisted that the law provided no such authority.