New Intel Doc: Do Not Be ‘Led Astray’ By ‘Commonly Understood Definitions’

Defense analysts are told to cast aside standard word definitions. So “collecting” is NOT “gathering!” 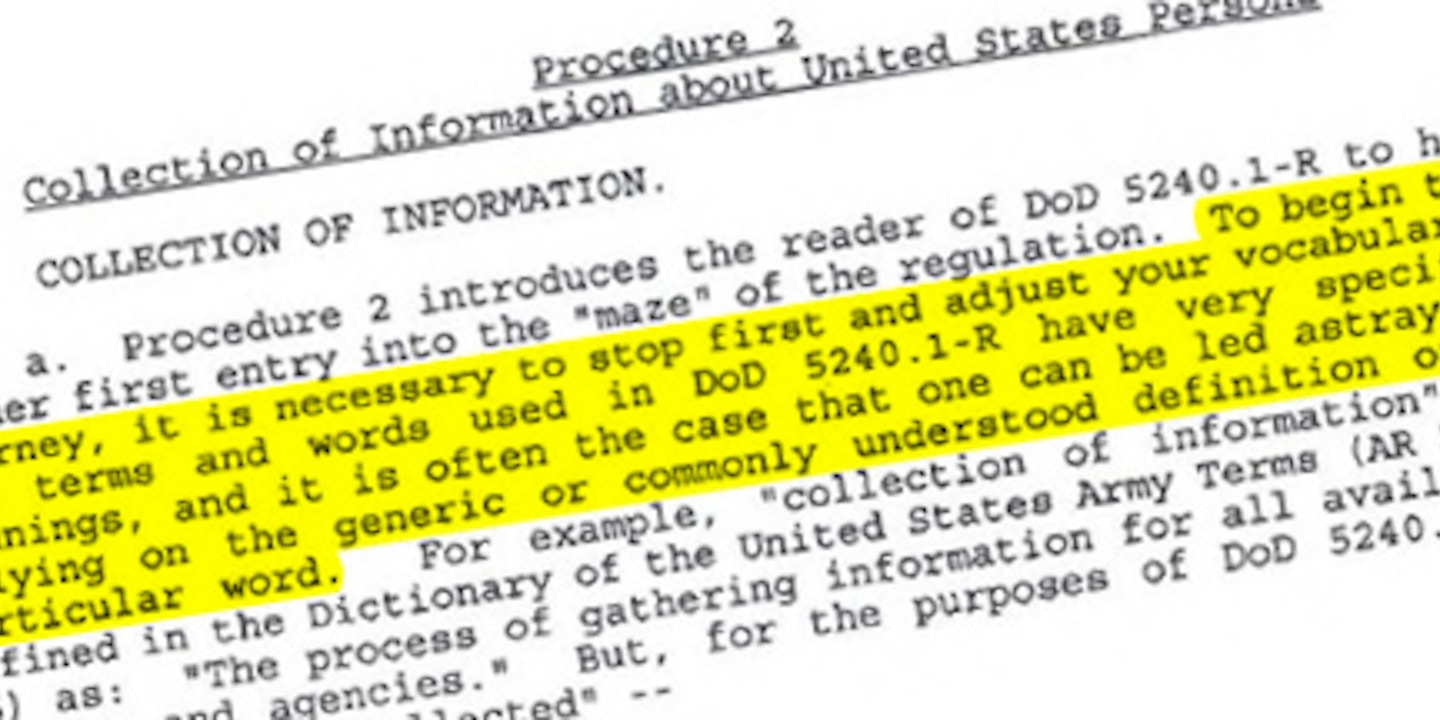 New evidence of the intelligence community’s intentionally deceptive use of the English language was released today in the form of a Defense Intelligence Agency document that instructs analysts to use words that do not mean what they appear to mean.

The section of the DIA’s “intelligence law handbook” on the “Collection of Information about United States Persons” opens like this:

To begin the journey, it is necessary to stop first and adjust your vocabulary. The terms and words used in DoD 5240.1-R have very specific meanings, and it is often the case that one can be led astray by relying on the generic or commonly understood definitions of a particular word.

The plainspoken employee handbook was one several documents about Executive Order 12333 the ACLU obtained through a Freedom of Information Act lawsuit and released today. See also today’s Intercept story: “The Ghost of Ronald Reagan Authorizes Most NSA Spying”

Here is the handbook explaining how not to be led astray:

For example, “collection of information” is defined in the Dictionary of the United States Army Terms (AR 310- 25) as: “The process of gathering information for all available sources and agencies. ” But, for the purposes of DoD 5240 .1-R, information is “collected” —

only when it has been received for use by an employee of a DoD intelligence component in the course of his official duties… (and) an employee takes some affirmative action that demonstrates an intent to use or retain the information.

So, we see that “collection of information” for DoD 5240.1-R purposes is more than “gathering” – it could be described as “gathering, plus … “. For the purposes of DoD 5240.1-R, “collection” is officially gathering or receiving information, plus an affirmative act in the direction of use or retention of that information.

For good measure, there’s this footnote:

Analysts can even gather information and keep it for up to six months without it counting as having been “collected”, as long as it’s being “held or forwarded to a supervisory authority, solely for the purpose of making a determination about its collectability.”

Although the intelligence community’s astonishing abuse of words has been frequently noted, particularly in the context of surveillance, this may be the first time we’ve actually seen an instruction manual.

And as it happens, it comes right in the middle of a couple pieces I’m writing about another linguistic perversion, the non-denial denial. (My exegesis of CIA director John Brennan’s latest ran on Friday; more examples from recent history should be out tomorrow.)

The intelligence community’s redefinition of terms inspired the ACLU’s Jameel Jaffer and Brett Max Kaufman last year to author a “lexicon for decoding the true meaning of what NSA officials say” which includes nifty non-intuitive recastings of terms such as surveillance, relevant, targeted, incidental and inadvertent.

There’s also a “Guide to the Deceptions, Misinformation, and Word Games Officials Use to Mislead the Public About NSA Surveillance” that Trevor Timm wrote for the Electronic Frontier Foundation, and Mike Masnick’s more tongue in check “NSA-To-English Dictionary” from Techdirt.