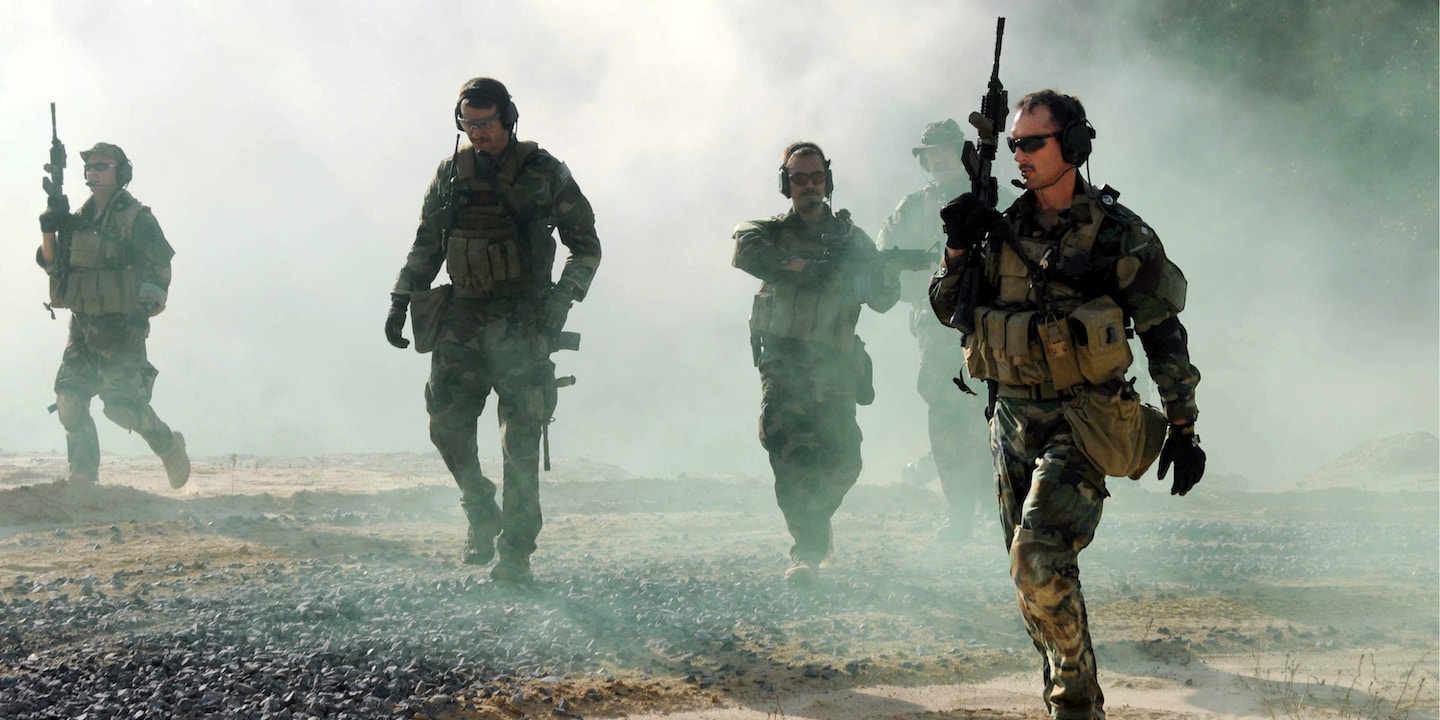 A former Navy intelligence officer is slated to go on trial in federal court next week on charges he conspired with a California auto mechanic to manufacture untraceable silencers for automatic rifles, ship them cross-country, and defraud the feds of nearly $1.7 million in the process.

The strange and soap operatic tale of Pentagon-centered intrigue has been unfolding since 2011, when the two conspirators facing criminal charges — Lee Hall, then a civilian Naval intelligence officer, and Mark Landersman, a mechanic facing a separate trial who is also the  brother of Hall’s former boss  — entered into a nearly $1.7 million deal to have 349 silencers manufactured, apparently for a clandestine military operation, according to The Washington Post and court documents. Federal prosecutors say the silencers only cost around $10,000 to make.

Even the prosecutors alleging fraud acknowledge the silencers were connected to a genuine, high-level secret operation, known in federal parlance as a “special access program.” But exactly what that operation might have been is entirely unclear. One story suggests the silencers were being procured for use by Navy SEAL Team 6, which disavowed any knowledge of them; another says they were being produced to outfit a stockpile of AK-47-style rifles that were seized overseas and then stored in the U.S. for later, untraceable, use abroad.

He farmed out manufacturing to a machinist, who said he was asked to make hundreds of ‘small engine’ mufflers. In retrospect, he told the feds, they did actually look like silencers.

That the illegal baffling devices were manufactured and shipped is clear, but as the tale spins forward in federal court, the why and what for remain, at least publicly, unknown.

As the Post notes in its reporting this week, many documents related to the investigation have been filed under seal with the federal court in Arlington, Va., making it difficult, at best, to determine whether they were purchased for a legitimate, secret military mission, or whether they were procured as part of a “rogue operation,” being run out of the Navy’s Directorate for Plans, Policy, Oversight and Integration* — a small office meant to provide support for Navy and Marine intelligence operations and staffed by civilians, most of them military retirees. As a former senior Navy official told the Post, directorate officials behaved as “wanna-be spook-cops” who acted like “they were building their own mini law enforcement and intelligence agency.”

Here is what is clear, according to public court records:

In 2011, Landersman — whose brother David Landersman was then the senior director of intelligence in the Navy’s PPOI office — Hall and at least two other, unnamed civilian employees of the aforementioned Navy PPOI office began communicating about a “proposal” to manufacture silencers. In a 2012 email, someone from the Navy office sent Landersman a link to the online article “How I Built a 300 AAC Blackout Suppressor,” with a message that he should look it over.

“Looks very much like what we’re going to send you,” it read.

“Wow! Very simple,” Landersman replied (though he apparently failed to read the article’s first line, which noted that a particular Bureau of Alcohol Tobacco Firearms and Explosives tax stamp is needed to avoid “hard prison time for violating” federal firearms law that bans manufacture of most silencers).

In August 2012, the Navy’s Financial Management Division sent an email to the office to say that a request for a boost to the office’s budget — again, made by an unnamed conspirator — had been granted, in the sum of $2 million. According to a federal indictment, Hall then set out to procure a no-bid contract for Landersman’s newly-formed company, Advanced Machining and Engineering, to get the job to produce the 349 silencers at a total price of roughly $1.7 million. The sole-source contract was necessary, Hall wrote, because Landersman’s company possessed a “wholly, and solely exclusive” proprietary process for manufacturing the needed suppressors, according to an affidavit for an arrest warrant.

Once Landersman had the dough (half up front, records indicate) he farmed out the manufacturing work to another person — a machinist who said he was asked to make several hundred “small engine” mufflers based on a prototype (in retrospect, he told the feds, they did actually look like silencers). Landersman paid just $12,000 to manufacture the entire order, which he then FedExed to Maryland where Hall apparently signed for the goods.

The scheme, or whatever it was, apparently didn’t net any outside notice until sometime in early 2013, after the Naval Criminal Investigative Service became suspicious of another directorate official, Tedd Shellenbarger, who flashed credentials at the Defense Intelligence Agency that falsely identified him as a law enforcement officer. Back at the PPOI office, the NCIS found badge-making materials; the investigation grew from there.

Hall has said that the silencer scheme was in fact a deal approved by Deputy Under Secretary of the Navy Robert Martinage, the Post reported, and that Hall had notes in his office that could prove the operation was legit.

Of course that may now be difficult for Hall (and Landersman) to prove. Indeed, after news of the federal investigation landed on the Post’s front page in mid-November 2013, Navy security officers incinerated documents they had seized from the PPOI office. The federal court ultimately ordered the Navy to cease any further document destruction and to account for all that had been seized and burned. (And after investigators involved in the silencer probe found unrelated evidence of personal “misconduct” on Martinage’s part, Martinage was asked in January to resign.)

According to the Post, when told about the destruction of evidence in the case Judge Leonie Brinkema was “incredulous,” and has on other occasions questioned whether prosecutors “were fully aware” of what was going on in the PPOI office and whether it actually wanted to expose those innards in court. “We’re getting deeper and deeper into a morass,” the Post quoted her as saying during a March hearing. “One of the things the government always has to think about is the cost-benefit analysis. At the end of the day, is this particular criminal prosecution worth the risk of having to disclose or reveal very sensitive information?”

*The original post included a typo that renamed the PPOI office the Navy’s Directorate for Plans, Policy, Oversight and Interrogation.