The FBI Director’s Evidence Against Encryption Is Pathetic

James Comey’s four examples of encryption perils would be laughable if they weren’t so tragic. 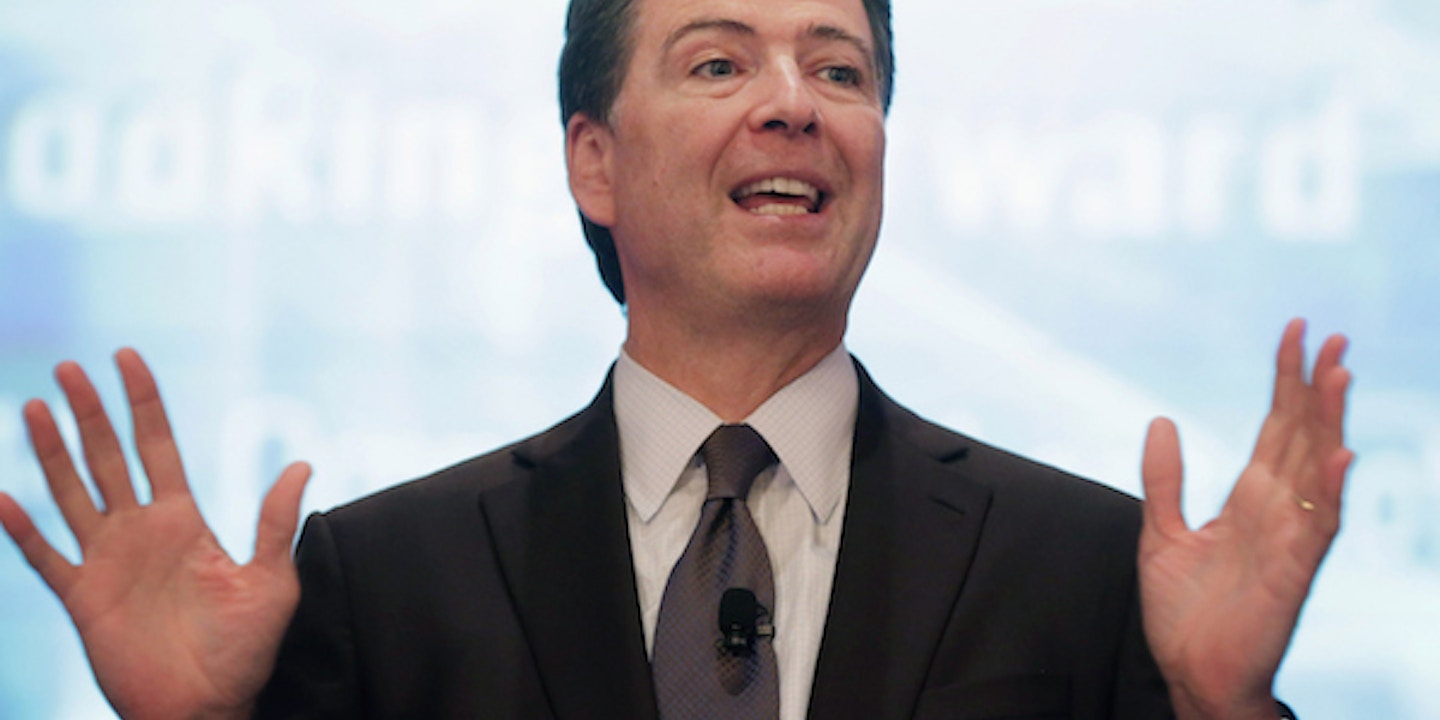 FBI Director James Comey gave a speech Thursday about how cell-phone encryption could lead law enforcement to a “very dark place” where it “misses out” on crucial evidence to nail criminals. To make his case, he cited four real-life examples — examples that would be laughable if they weren’t so tragic.

In the three cases The Intercept was able to examine, cell-phone evidence had nothing to do with the identification or capture of the culprits, and encryption would not remotely have been a factor.

In the most dramatic case that Comey invoked — the death of a 2-year-old Los Angeles girl — not only was cellphone data a non-issue, but records show the girl’s death could actually have been avoided had government agencies involved in overseeing her and her parents acted on the extensive record they already had before them.

In another case, of a Lousiana sex offender who enticed and then killed a 12-year-old boy, the big break had nothing to do with a phone: The murderer left behind his keys and a trail of muddy footprints, and was stopped nearby after his car ran out of gas.

And in the case of a Sacramento hit-and-run that killed a man and his girlfriend’s four dogs, the driver was arrested in a traffic stop because his car was smashed up, and immediately confessed to involvement in the incident.

In Los Angeles, police investigated the death of a 2-year-old girl from blunt force trauma to her head. There were no witnesses. Text messages stored on her parents’ cell phones to one another and to their family members proved the mother caused this young girl’s death and that the father knew what was happening and failed to stop it. Text messages stored on these devices also proved that the defendants failed to seek medical attention for hours while their daughter convulsed in her crib.

Comey was evidently referring to Abigail Lara-Morales, a 2-year old Latina from Lynwood, California who died in 2011 at the hands of her parents. What Comey skipped over was that an independent audit of problems at the county’s Department of Children and Family Services (DFCS)  found that Abigail’s death was avoidable had any of the three government agencies involved in overseeing her and her parents done their jobs. The text messages Comey characterizes as an evidentiary clincher in Abigail’s sad death just added to the prosecutors’ already overwhelming case.

Before the Los Angeles Police Department started investigating Abigail’s death, county offices had extensive records on her disturbed parents. Abigail had been removed from her parents by DCFS shortly after her birth because she was found to be malnourished and dangerously underweight. Her parents were identified as “negligent.” DCFS placed Abigail with a relative while her parents were mandated to enroll in parenting classes and violence prevention programs. After two years, DCFS returned Abigail to her parents even though the couple had to report to jail to be incarcerated there every weekend for the next 11 months because of a 2009 charge felony for willful cruelty to a child that could result injury or death, court documents reveal. Abigail’s father never enrolled in a 52-week violence-prevention program and had an active arrest warrant for failing to do so.

Abigail was in cardiac arrest when her parents finally called 911, a full day after they had severely beaten her. The paramedics reported that her bruises seemed to be covered by blue paint. Abigail was taken off life support a few days later and died. Her parents pleaded no contest and are currently in prison.

The evidence — a felony child abuse charge, an active arrest warrant, a neglect charge, the abuse hotline tip, the social worker report that Abigail’s mother hated her toddler, the weekend trips to jail, Abigail’s bruised and beaten body — all amounted to a compelling case without any text messages.

Another of Comey’s examples was equally irrelevant to his argument:

In Louisiana, a known sex offender posed as a teenage girl to entice a 12-year-old boy to sneak out of his house to meet the supposed young girl. This predator, posing as a taxi driver, murdered the young boy and tried to alter and delete evidence on both his and the victim’s cell phones to cover up his crime. Both phones were instrumental in showing that the suspect enticed this child into his taxi.

This is the March 2010 case of registered sex offender Brian Douglas Horn, who pretended to be a teenage girl in order to lure 12-year-old Justin Bloxom to meet him, then strangled him in the nearby woods.

According to local news reports, Horn drove his taxicab to pick up Bloxom from a friend’s house around 3 a.m., and it was spotted by several witnesses in the area. Horn then ran out of gas. A sheriff’s deputy stopped to check on the cab, ran Horn’s driver’s license and saw he was a registered sex offender. A few hours later, when Bloxom was reported missing, deputies found muddy footprints between the cab’s location and the murder scene, where Horn had also dropped his car keys.

At trial, the sexually graphic texted messages between Bloxom and Horn were presented to the jury. But they were hardly necessary for conviction.

In Sacramento, a young couple and their four dogs were walking down the street at night when a car ran a red light and struck them—killing their four dogs, severing the young man’s leg, and leaving the young woman in critical condition. The driver left the scene, and the young man died days later. Using “red light cameras” near the scene of the accident, the California Highway Patrol identified and arrested a suspect and seized his smartphone. GPS data on his phone placed the suspect at the scene of the accident and revealed that he had fled California shortly thereafter. He was convicted of second-degree murder and is serving a sentence of 25 years to life.

Back in 2010, Paul William Walden, a heroin addict with three arrests for driving under the influence and a suspended license, fatally slammed his 1987 Nissan Maxima into Harison Long-Randall, seriously injured the victim’s girlfriend, Gemily West, and killed her four Australian cattle dogs.

But local news accounts make it clear that the GPS data on his phone had nothing to do with his arrest or conviction. Walden confessed to hitting a dog after he was pulled over by attentive California Highway Patrol officers, who had been discussing the hit-and-run at the moment he drove by with a broken headlight.

As the Sacramento Bee reported:

Walden, who has a lengthy arrest record, was taken into custody on charges of driving on a suspended license and driving under the influence.

By then, the officers noticed that his car had front-end damage matching the evidence found at the scene of the hit-and-run: a missing driver’s side mirror and damage to the running lights and turn signal. They figured they had found their suspect, although Walden believed at the time that he was merely being booked on another DUI, Van Lindt said.

Once they started to question him, however, he conceded he had been in an incident Monday night in Carmichael, Van Lindt said.

“It was something along the lines of, ‘I saw an individual walking a dog and I thought I’d hit the dog, so I just kept going.’ “

Comey and other law enforcement officials have been arguing that the “post-Snowden pendulum” that led Apple and Google to offer fully encrypted cellphones has “gone too far.”

His poor examples, however, were reminiscent of one cited by Ronald T. Hosko, a former assistant director of the FBI’s Criminal Investigative Division, in a widely cited – and thoroughly debunked – Washington Post opinion piece last month.

In that case, the Post was eventually forced to have Hosko rewrite the piece, with the following caveat appended:

* Editors note: This story incorrectly stated that Apple and Google’s new encryption rules would have hindered law enforcement’s ability to rescue the kidnap victim in Wake Forest, N.C. This is not the case. The piece has been corrected.

Hadn’t Comey found anything better since then? In a question-and-answer session after his speech, Comey both denied trying to use scare stories to make his point – and admitted that he had launched a nationwide search for better ones, to no avail.

When a reporter asked for examples of crimes that had been actually averted due to phone data that might in the future be encrypted, Comey’s response was not entirely intelligible.

Rescuing someone before they’re harmed? Someone in the trunk of a car or something? I don’t think I know – yet? I’ve asked my folks just to canvas – I’ve asked our state and local partners are there some examples where this – I think I see enough, but I don’t think I’ve found that one yet. I’m not looking. Here’s the thing. When I was preparing the speech, one of the things I was inclined to talk about was — to avoid those kids of sort of ‘edge’ cases because I’m not looking to frighten people. Logic tells me there’re going to be cases just like that, but the theory of the case is the main bulk of law enforcement activity. But that said I don’t know the answer. I haven’t found one yet.

Facing the huge preponderance of evidence that encryption makes us safer, not less safe, Comey realizes he needs some solid evidence to support his side of the argument. But there’s a reason he hasn’t found it yet.

Update: Added new detail on the charges against the parents of Lara-Morales. 4:05 pm ET