It has been more than two years since The New York Times revealed that “Mr. Obama embraced a disputed method for counting civilian casualties” of his drone strikes which “in effect counts all military-age males in a strike zone as combatants. Yet U.S. media outlets continue to use the term.

It has been more than two years since The New York Times revealed that “Mr. Obama embraced a disputed method for counting civilian casualties” of his drone strikes which “in effect counts all military-age males in a strike zone as combatants…unless there is explicit intelligence posthumously proving them innocent.” The paper noted that “this counting method may partly explain the official claims of extraordinarily low collateral deaths,” and even quoted CIA officials as deeply “troubled” by this decision: “One called it ‘guilt by association’ that has led to ‘deceptive’ estimates of civilian casualties. ‘It bothers me when they say there were seven guys, so they must all be militants. They count the corpses and they’re not really sure who they are.'”

But what bothered even some intelligence officials at the agency carrying out the strikes seemed of no concern whatsoever to most major media outlets. As I documented days after the Times article, most large western media outlets continued to describe completely unknown victims of U.S. drone attacks as “militants”—even though they (a) had no idea who those victims were or what they had done and (b) were well-aware by that point that the term had been “re-defined” by the Obama administration into Alice in Wonderland-level nonsense. 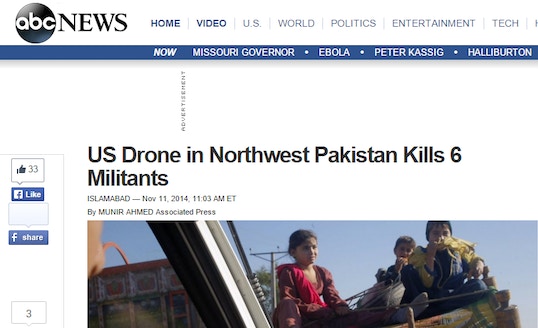 Since its 2012 report, the Times itself has tended to avoid the “militant” language in its headlines, but often lends credence to dubious official claims, as when it said this about a horrific U.S. drone strike last December on a Yemeni wedding party that killed 12 people and wounded at least 15 others, including the bride: “Most of the dead appeared to be people suspected of being militants linked to Al Qaeda, according to tribal leaders in the area, but there were also reports that several civilians had been killed.” Other U.S. media accounts of that strike were just as bad, if not worse. The controversies over the definition of “militant” are almost never mentioned in any of these reports.

A new article in The New Yorker by Steve Coll underscores how deceptive this journalistic practice is. Among other things, he notes that the U.S. government itself—let alone the media outlets calling them “militants”—often has no idea who has been killed by drone strikes in Pakistan. That’s because, in 2008, George W. Bush and his CIA chief, Gen. Michael Hayden, implemented “signature strikes,” under which “new rules allowed drone operators to fire at armed military-aged males engaged in or associated with suspicious activity even if their identities were unknown.” The Intercept previously reported that targeting decisions can even be made on the basis of nothing more than metadata analysis and tracking of SIM cards in mobile phones.

The journalist Daniel Klaidman has noted that within the CIA, they “sometimes call it crowd killing….  If you don’t have positive ID on the people you’re targeting with these drone strikes.” The tactic of drone-killing first responders and rescuers who come to the scene of drone attacks or even mourners at funerals of drone victims—used by the Obama administration and designated “terror groups” alike—are classic examples. Nobody has any real idea who the dead are, but they are nonetheless routinely called “militants” by the American government and media. As international law professor Kevin Jon Heller documented in 2012, “The vast majority of drone attacks conducted by the U.S. have been signature strikes—those that target ‘groups of men who bear certain signatures, or defining characteristics associated with terrorist activity, but whose identities aren’t known.’”

Coll also describes the critical work of Noor Behram, a photojournalist who has spent years traveling to drone strike scenes in North Waziristan to document—as a 2011 Guardian profile put it—”that far more civilians are being injured or dying than the Americans and Pakistanis admit”; that “the world’s media quickly reports on how many militants were killed in each strike” even though “reporters don’t go to the spot, relying on unnamed Pakistani intelligence officials”; and that “for every 10 to 15 people killed, maybe they get one militant.” Coll describes the propagandistic process that continues to shape U.S. media reports on these strikes:

I picked up a photo that showed Behram outdoors, in a mountainous area, holding up a shredded piece of women’s underwear. He said it was taken during his first investigation, in June, 2007, after an aerial attack on a training camp. American and Pakistani newspapers reported at the time that drone missiles had killed Al Qaeda-linked militants. There were women nearby as well. Although he was unable to photograph the victims’ bodies, he said, “I found charred, torn women’s clothing—that was the evidence.”

Since then, he went on, he has photographed about a hundred other sites in North Waziristan, creating a partial record of the dead, the wounded, and their detritus. Many of the faces before us were young. Behram said he learned from conversations with editors and other journalists that if a drone missile killed an innocent adult male civilian, such as a vegetable vender or a fruit seller, the victim’s long hair and beard would be enough to stereotype him as a militant. So he decided to focus on children.

There’s simply no doubt that U.S. media outlets have continuously and repeatedly—and falsely—described innocent civilians killed by U.S. drone attacks as “militants.” Just last month, the Bureau of Investigative Journalism documented that “fewer than 4% of the people killed have been identified by available records as named members of al Qaeda,” directly contrary to “John Kerry’s claim last year that only ‘confirmed terrorist targets at the highest level’ were fired at.”

It’s certainly true that reporting is extremely difficult in those places where U.S. drone strikes are most common. But that’s all the more reason to exercise caution when making claims about who the victims are. Instead, these media outlets reflexively adopt the extremely dubious claims of U.S. officials and those of allied governments (such as Yemen and Pakistan) about the identity of the victims. That practice, standing alone, is indefensible enough as pro-government stenography, but the fact that it continues even two years after the Times revealed that the U.S. government has formally adopted a completely propagandistic definition of “militant” makes this behavior willfully misleading. 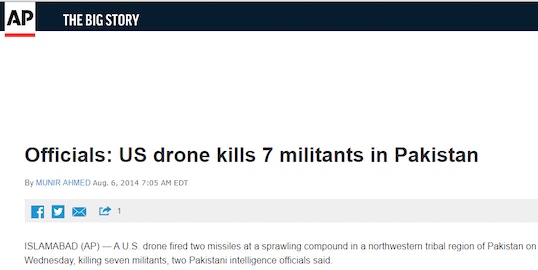 All of this has achieved the desired effect. Any time you discuss U.S. drone attacks, you inevitably will be told that the U.S. government is killing “terrorists” and “militants”—even though the people making that claim have absolutely no idea who the government is actually killing. It’s easy to dismiss that mindset as supreme irrationality and authoritarianism—what kind of person runs around claiming their government is killing “terrorists” and “militants” when they have no idea who the victims are?—but they’re just adopting the formula for how the U.S. government and media have consciously chosen to propagandize on this issue.

Coll’s article also discusses an oft-ignored aspect of drone warfare: its psychologically terrorizing effects on the targeted population. A joint 2012 report from the law schools of Stanford University and NYU, “Living Under Drones,” documented that “U.S. drone strike policies cause considerable and under-accounted-for harm to the daily lives of ordinary civilians, beyond death and physical injury”—specifically, they “hover twenty-four hours a day over communities in northwest Pakistan, striking homes, vehicles, and public spaces without warning. Their presence terrorizes men, women, and children, giving rise to anxiety and psychological trauma among civilian communities.” Coll’s article similarly notes:

Being attacked by a drone is not the same as being bombed by a jet. With drones, there is typically a much longer prelude to violence. Above North Waziristan, drones circled for hours, or even days, before striking. People below looked up to watch the machines, hovering at about twenty thousand feet, capable of unleashing fire at any moment, like dragon’s breath. “Drones may kill relatively few, but they terrify many more,” Malik Jalal, a tribal leader in North Waziristan, told me. “They turned the people into psychiatric patients.”

The U.S. Joint Chiefs of Staff just released their annual “counterterrorism” report and it defined “terrorism” this way:

Terrorism is the unlawful use of violence or threat of violence, often motivated by religious, political, or other ideological beliefs, to instill fear and coerce governments or societies in pursuit of goals that are usually political.

There is, to put it generously, enormous doubt about the legality of both “signature strikes” and the targeting of rescuers and mourners. The UN special rapporteur on extrajudicial killings, summary or arbitrary executions, Christof Heyns, has even said some U.S. drone attacks may constitute “war crimes.” Given their intended effects—both physical and psychological—on entire populations, there is a very compelling case to make that continual, sustained drone warfare in places such as Pakistan and Yemen meet the U.S.’s formal definition of “terrorism” found in its latest strategy document.

Correction: This post initially claimed that the bride was among those killed in the so-called “Wedding Strike” in Yemen in December 2013. In fact, the bride was injured but not killed.