The Newsroom: Saunas Are the Last Bastions of Free Speech In our ongoing quest to commit fearless acts of premium-cable-watching, we are recapping Aaron Sorkin’s The Newsroom. In this, our discourse about Episode 3, we talk about bad haircuts, cheap hotels, searching and seizing and a sex magazine.

Micah Lee: So bad. She couldn’t even figure out how to copy files off SIPRNet herself.  And the incriminating paper was dipped in champagne.

Peter Maass: Should have burned it like Neal and the menu.

NVC: Can you encrypt champagne, Micah?

Lee: Yes, it rearranges the bubbles to an even randomer order

Margot Williams: To get into actual White House Correspondents’ dinner, your news org has to pay $$$ for table or you are an invited celebrity. But there are before and after parties too. Before parties you can sneak into easy (or at least used to be easy). After parties are the big invite. She is very good if she crashed the exclusive Bloomberg/Vanity Fair after party (this year it was at “Villa Firenze” — the 22-acre residence of the Italian ambassador to the US located deep in the woods of Rock Creek Park).

Williams: What about the source demanding that ACN go through the 27,000 documents in 3 days?

NVC: The source is “bossy.”

Maass: I thought Mac handled that meeting pretty well. Demanded the source tell her something only the source would know. Then limited further questions to things she (Mac) needed to know.

Lee: But wait, what’s this with Neal being in Venezuela? Wasn’t he planning on going somewhere he didn’t need to show ID?

Maass: Right, Will told the Dennehy-wannabe attorney general guy that Neal was supposed to go to a Super 8 in Bayonne NJ. Note to all: if I have to pull a runner, I will demand something finer than a Super 8.

NVC: Does that mean Neal is never coming back except to accept his Polk award?

Lee: Oh yeah the whole buying-the air-gapped-computer-receipt thing seemed stupid to me. It was probably an ACN credit card right, so it’s an ACN computer then? Or at least Will was going to expense it, so it doesn’t matter who went out and bought it.

NVC: Does Will use EXPENSIFY? Is it encrypted? Reimbursed by Bitcoin?

Maass: Micah, what is the protocol for buying an air gap computer, or what can you tell us about that? My understanding is cash at random computer stores (not the same one all the time) and probably best to wear a baseball cap or somesuch to shield your visual identity.

Lee: So it depends re: buying in cash. Cash makes it harder for anyone to keep track of what you’re buying. The big benefit would be that if you’re worried someone wants to tailor an attack against your air gap, if you buy it with a credit card and the attacker knows what you intend to use this computer for, the attacker could specifically design an attack against it. If you buy in cash it would be more difficult for them to even know that you’ve purchased this. Until you take a photo of the receipt and upload it to Expensify, of course, then it’s simple.

Maass: Because they would know your OS etc?

Maass: If they know the precise machine you bought, because you used a credit card, does that make it easier for them to FIND the machine, with their super-duper tailored-access wizardry?

Lee: Probably not. Especially if you remove the wifi card, which I don’t think Neal did. I think he just didn’t connect to wifi. If he doesn’t remove the wifi card, and wifi is turned on in Windows, it’s possible that an attacker could see his MAC address from within wifi range, and exploit the computer through that. Through a bug in his wifi driver.

Maass: I had an educational afternoon with someone who wanted to remove a wifi card but there was no wifi card–the shit was wired into the motherboard, and the motherboard couldn’t be messed with.

Lee: I also liked FBI asking, “What’s your name?” ACN reporter replied, “My name? It’s spelled ‘Arrest me or go fuck yourself.’ We’ve been raided. Unless that warrant says you can stick your hands in my pockets you’re gonna find yourself in a conversation about illegal search and seizure.”

Maass: I did love that. The real-world version of the EFF sticker for smartphones: “Get a warrant.” Did you invent that one, Micah?

Lee: Actually, Target invented that one. They randomly started selling “Come back with a warrant” welcome mats to put outside your front door. And at EFF we stole the idea. 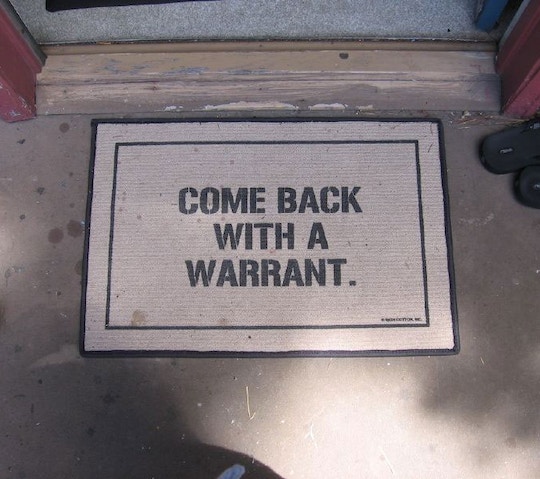 Maass: Basically everything that was taught to us in the opening scene of Newsroom Episode 3 was contained on an EFF sticker produced several years ago?

Lee: Yeah. And why wasn’t their $1500/hr lawyer doing this the entire time?

NVC: Was Charlie bluffing about broadcasting the raid?

Williams: Yes he was bluffing but why? It’s a news story.

Maass: Because the technicians weren’t around to push the buttons to go on the air, right?

Lee: I think the search warrant had a gag order, which means reporting on it would be illegal. However, they should still film it no matter what, for evidence in court!

NVC: That would have made Great Television.

Williams: Why did Maggie suddenly know how to run the control room? And when did she suddenly become an on-air reporter?

NVC: And when did she start wearing LEATHER SKIRTS?

Maass: Because Maggie is a Phoenix rising from the ashes of a bad haircut.

Maass: I loved the sauna scene. Because actually there was a sauna scene in the story that George Packer wrote for The New Yorker about Laura Poitras. It involved Packer interviewing Jacob Appelbaum in a sauna. Packer inferred that Appelbaum wanted to meet there for opsec and Packer implied that it showed Appelbaum was a bit paranoid.

Lee: I noticed that too Peter! And also, I’m pretty sure it’s because there’s a rumor that you can’t sneak recording devices into saunas, and I’m also pretty sure that it’s completely false and you actually can secretly record conversations in saunas.

NVC: There’s a spa clause in the constitution.

Williams: The FBI agent patted down Mac’s white towel. But she still could have been hiding the recording device. Maass: “He insisted on being interviewed in the club’s sauna, where another naked man was lying down. This seemed to be Appelbaum’s way of insuring that I wasn’t hiding any surveillance devices. We had contrary ideas about privacy: I keep my phone with me during interviews, but I don’t like discussing personal matters in front of strangers with my clothes off. After fifteen minutes, the pages of my notebook were soaked in sweat, and I asked to move the venue. We continued talking in an adjacent room, where numerous men wrapped in towels lounged on benches as Appelbaum told me the story of his life as an activist for anonymity.” (The reporting of G. Packer in The New Yorker.)

NVC: Can we pick sides about the old v new media divide rendered so provocatively by Lord Sorkin?! I really enjoyed the “sex magazine” line. Lee: Oh! Well so I support her decision to join the bonus-for-pageviews, Gawkeresque company, but it’s because I like people to have jobs even if they’re not perfect, and Jim was being a jerk about it even if he has a point.

NVC: I liked Jim more when he had a messy haircut. He’s getting very mansplain-y and snobby this round.

Williams: Back in the days of King Arthur

NVC: When they communicated through raven-based media.

Maass: The NYT Sunday Styles section has been around as long or longer than Gawker, right? That’s legacy clickbait, people. And at the risk of annoying every serious reporter in TV, I think there’s a structural problem with a TV guy talking about not going downmarket for viewers. TV turned down that road ages ago. That debate, if it still seriously occurs, would be at legacy print outlets, I’d think.

Maass: That plotline really scared me, because Sorkin appears to have entered a new time/space continuum where he channels and predicts The Intercept‘s past, present and future (Snowden, billionaire, lord knows what comes next).

NVC: Do you think Sorkin is reading our HipChats? Or he just lives in our minds? And in our spirits?

Maass:  We are all Sorkin now.

NVC:  Do we think they will broadcast the story?

Maass: It’s them or the source; someone’s going to publish it.

Lee: I hope they broadcast it. There are only 3 episodes left until the world ends. Climate change is that bad.