Tensions continued to simmer overnight in Ferguson as a sharply reduced group of demonstrators clashed with police in this embattled St. Louis suburb. 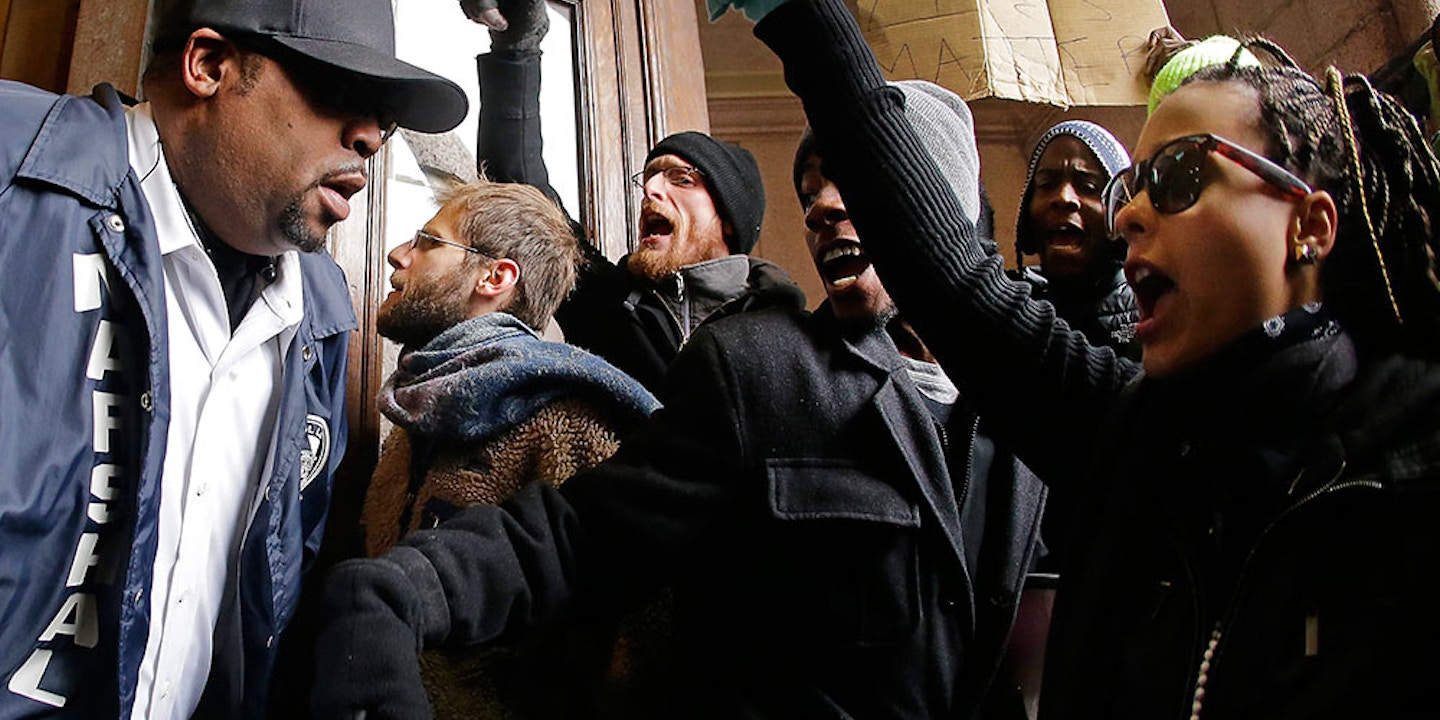 Editor’s Note: February 2, 2016
After uncovering misattributed quotes in stories written by Juan Thompson, a former staff reporter, The Intercept conducted a review of his work. We were unable to confirm the quotes in this piece attributed to Heaven Russell and an unnamed protester.

FERGUSON, Mo. — Tensions continued to simmer overnight in Ferguson, Mo., as a sharply reduced group of demonstrators clashed with police in this embattled St. Louis suburb. Following the events of Monday night, officials beefed up the law enforcement presence in front of the Ferguson Police department headquarters on South Florissant. Indeed, the protestors were nearly outnumbered by the police. But neither the frigid November air nor the massive show of force deterred them.

“They don’t scare us anymore,” said a protestor in a Guy Fawkes mask, hinting at the possibility of an expansion of this nascent movement’s targets. “We’re tired of being afraid. This is about racism and classism and everything!” We were talking a few feet away from the Ferguson City Hall, which is where demonstrators shifted their focus after encountering a militarized front outside of police headquarters.

Moments after his declaration of defiance, police fired tear gas canisters into the crowd. They claimed to have done so after a group of protestors set fire to a police cruiser and flipped it over. Nevertheless, the tear gas only incensed the crowd, some of whom had been hit with tear gas the night prior. Police, meanwhile, reported 44 arrests for numerous infractions, including failure to disperse, the throwing of smoke bombs and bottles filled with urine, and the busting of windows at city hall.

Last night demonstrators across the country, marching in solidarity with Ferguson protestors, disrupted traffic in New York, Minneapolis, San Diego and Chicago. Cleveland demonstrators blocked a major shoreway to protest both the grand jury decision in St. Louis County, and the recent death of 12-year-old Tamir Rice, who is black and who was shot and killed by a rookie police officer. Officials in Cleveland and other cities reported sporadic arrests, but nowhere did the demonstrations resemble the anger displayed Monday in Ferguson.

It’s not clear if protestors or government officials know what is coming next. But what is clear is that the social movement born here in the St. Louis region has spread across the country and broaden in scope. For example, members of “Show Me $15″ — a collection of activists fighting to raise the minimum wage — joined protestors in a snowy downtown St. Louis Wednesday.

“It doesn’t matter who you are or where you live, all of this [Ferguson and a living wage] is connected,” said Heaven Russell, 22, a cashier at McDonald’s. With that, she brushed snow flakes from her hair and jumped into a van. Russell and others were on their way to a local Walmart to protest the company’s treatment of workers.