“No Justice, No Respect”: Why the Ferguson Riots Were Justified

When the St. Louis County Prosecutor, during a bizarre press conference, announced the decision not to indict Darren Wilson, I was standing 10 feet away from Michael Brown’s mother, Lesley McSpadden. 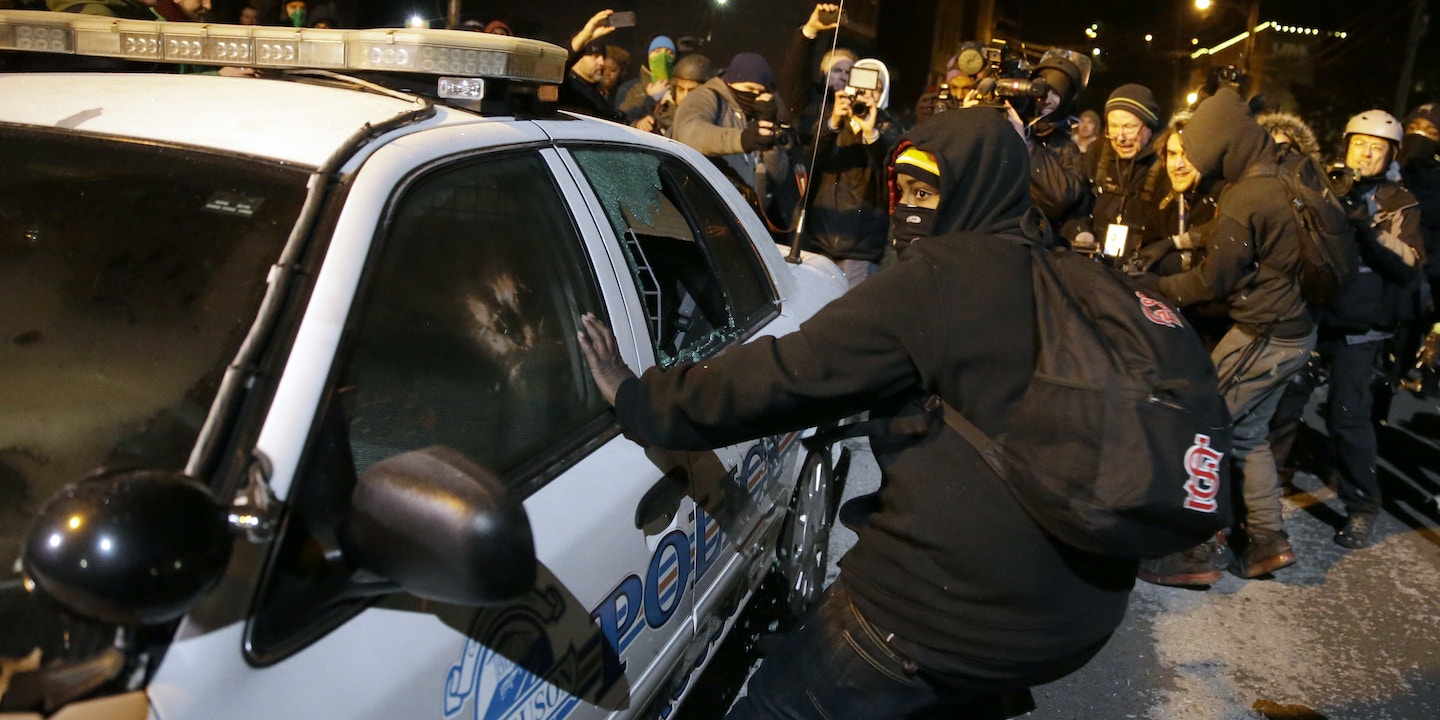 Editor’s Note: February 2, 2016
After uncovering misattributed quotes in stories written by Juan Thompson, a former staff reporter, The Intercept conducted a review of his work. We were unable to confirm the quotes in this piece attributed to Dashawn Woods, Michael Brady, and Brady’s fiancée. A spokesperson from St. Louis Mayor Francis Slay’s office could not confirm that Thompson had spoken to the mayor.

When the St. Louis County Prosecutor, during a bizarre press conference, announced the decision not to indict Darren Wilson, I was standing 10 feet away from Michael Brown’s mother, Lesley McSpadden. I, along with a few thousand other people, saw the hurt on McSpadden’s face before she collapsed in agony after weeping and complaining about the injustice of the criminal justice system. McSpadden’s boyfriend then told the crowd to “Burn this bitch down!” — a comment born out of undeniable rage. It is an anger with which I can sympathize, but never fully understand, given that I have not lost a loved one to such violence. In the end, some stores were looted by a few people, and some buildings were burned, while two police cruisers were destroyed.

The police assaulted the largely peaceful crowd with tear gas after their vehicles were set on fire. My three younger brothers, ages 27, 21, and 19, accompanied me to Ferguson, and one of the tear gas canisters hit my 21-year-old brother on the leg. Being a young reporter anxious to “get the story,” I ignored the pleas of one of my other brothers to wrap a cloth around my face. How stupid of me. The smoked engulfed me and triggered my asthma. My eyes burned and my lips felt as if my Chapstick had been contaminated with Wasabi paste. As people scattered, someone in the crowd fired a gun into the air. Upon hearing the shots I instinctively hit the ground and cowered behind a car. Being raised in West St. Louis, I was taught to always kiss the floor when I hear the “pop, pop, pop” of a gun.

A young man passing by told me, “Get your scary ass up. You ain’t got nothing to be scared of.” After my brother argued with him, he warned us, “I got those things,” where “things” meant firearms. But I couldn’t bring myself to be angry with that guy; the violence he threatened to inflict upon my brothers and me is a grim legacy of America’s long history of violence toward black people.  And so the condemnation of the Ferguson protestors and rioters, by those who gained and sustained their power through violence, is the worst sort of rank hypocrisy.

White Americans who label the demonstrators criminals and thugs should think twice before uttering such poppycock. White privilege was neither produced nor maintained by peaceniks. The European colonizers slaughtered the original Americans before stealing their land. The founding fathers were violent revolutionaries who overthrew a tyrant. And white America enslaved Africans, robbing them and their descendants of precious capital. As Ta-Nehisi Coates wrote, “When we think of white supremacy, we picture Colored Only signs, but we should picture pirate flags.”

Someone at some point is reported to have said, “Great minds discuss ideas; average minds discuss events; small minds discuss people.” Among many segments of white America, there is an obsession with Michael Brown the person. They smear him as a drug addict and a thug — the latter has become a substitute for “nigger” in modern parlance. Those same people appear to be incapable or unwilling to see Brown’s humanity or the broader rationale behind the protests, which have spread across the country and even touched Europe.

White acquaintances, who told me in high school that I acted and talked white, now tell me I am racist toward white folk because I dare mention the idea fueling the tumult in Ferguson: white supremacy. They grow defensive when those two words are spoken. It appears my white acquaintances, and many other white Americans, agree with Oscar Wilde that such debates — about the ghastly effects of racial supremacy — “are to be avoided because they are always vulgar and often convincing.” Yet, try as they might, what transpired in Ferguson was never just about Michael Brown. His death was certainly a spark, but the frustrations have been there since black people were brought to this continent and denied full access to American citizenship. In August, a friend shared a video on Facebook that captured Ferguson residents assembled on Canfield Drive, where the Brown shooting occurred, in the days after Brown’s killing. One person in the video said, “We fed up with these people, man. Don’t expect the courts to help.” Another, through a pained and angry voice, yelled, “We keep giving these crackers our money, staying in they [apartment] complexes, and we can’t get no justice! No respect!”

No justice. No respect.

Ferguson is a city that is 67 percent black, yet black people are 86 percent of those stopped by the police. No justice. No respect.

Black drivers are 93 percent of those arrested in Ferguson. No justice. No respect.

This despite the fact that white drivers are more likely to possess contraband, based on the percentage of those searched who have illegal goods. No justice. No respect.

Four years ago, my step-father and brothers were rehabbing a house in a white neighborhood in Ferguson when someone called the police and reported a potential burglary. Police officers, in multiple cars, rolled up on them with guns drawn. They ordered my family to the ground, spread eagle. “I almost peed on myself,” my little brother told me. No justice. No respect.

On the way home from Ferguson, after the Monday night protests, a Pagedale City police officer pulled over my rental car. The officer who stopped me apparently called for backup, as two other cruisers eventually joined him. He asked to see my license and, as I reached in the back for my bag, I heard the officer grunt an alarmed “Whoa.” I should have known better than to reach for any concealed object, considering what happened in South Carolina. Fear gripped me and sweat drenched my new Uniqlo shirt. I apologized even though I was only going 5 miles over the speed limit. No justice. No respect.

Critics of the Ferguson rioters and protestors are quick to label them part of an irrational, greedy, criminal element. But such a facile analysis is an insult to the generations long struggle of black Americans. The Ferguson demonstrators are sharp political actors offering a giant “fuck you” to a political and business establishment that long ago told black Americans to fuck off. One of the most telling scenes from Monday night came when a small group of rioters set their sights on a restaurant purportedly owned by a black woman. “Don’t do this! We gotta protect black businesses. Go after those other motherfuckers!” a woman screamed. Missouri Highway Patrol Captain Ron Johnson said, during a press conference after the first night of rioting, “Change is brought about by our voices, not the destruction of our community.” That assertion is a profound misreading of the mood in Ferguson. A lot of the black citizens of Ferguson simply do not view the community as theirs.

The mayor is a white conservative. The police chief is white. The police force is 94 percent white. And the racial disaffection is not just black and white. One of the protestors, Dashawn Woods, 26, told me, “They give the Arabs loans to start businesses and come out here and take our money, but we can’t get a penny.” If anything, Ferguson awakened some of us from the fatuous dream that America had morphed into a racial Shangri-La. Ultimately, what’s important — much more than a few torched buildings and some trifling stolen items — is the reason why people responded in the way they did. Broken lives should always be prioritized over broken windows.

Last week I was sitting in a coffee shop in St. Louis’ midtown neighborhood filing a story about Ferguson when St. Louis Mayor Francis Slay walked in. He was chomping, quite loudly, on a green apple. But his noisy chewing didn’t deter me. “Can you understand the response from the people of Ferguson? Even the rioting?” I asked. He put down his apple and grew tense. “No. Absolutely not,” he barked. “But the hurt and anger is genuine. A white supremacist police state is responsible for all this, yes?” Slay was pissed at that point. “No. A Criminal element is the cause of this.”

The mayor then babbled on, about all the supposed good he is doing or has done for the city’s beleaguered black population, before scampering off for an interview with NPR. But any person who looks at Ferguson and does not recognize the root cause of it is not the least bit interested in confronting America’s institutionalized racism. He or she is committed to maintaining the current social order that was built to oppress and degrade black life. He or she is an opponent of justice and a proponent of white supremacy.

Michael Brady, 32, witnessed a part of the 90-second confrontation between Brown and Wilson in August. We met, before the grand jury announcement, in his apartment on Canfield Drive, mere feet from Brown’s killing, as the November rain fell outside. “I don’t expect Wilson to be indicted,” Brady told me as his baby boy played at his feet. “The system ain’t built for that.” His fiancée added that “All we can do is be black, continue to speak up for what’s right, and live our life.”