The Most Misogynistic, Hateful Elected Official in the Democratic World: Brazil’s Jair Bolsonaro 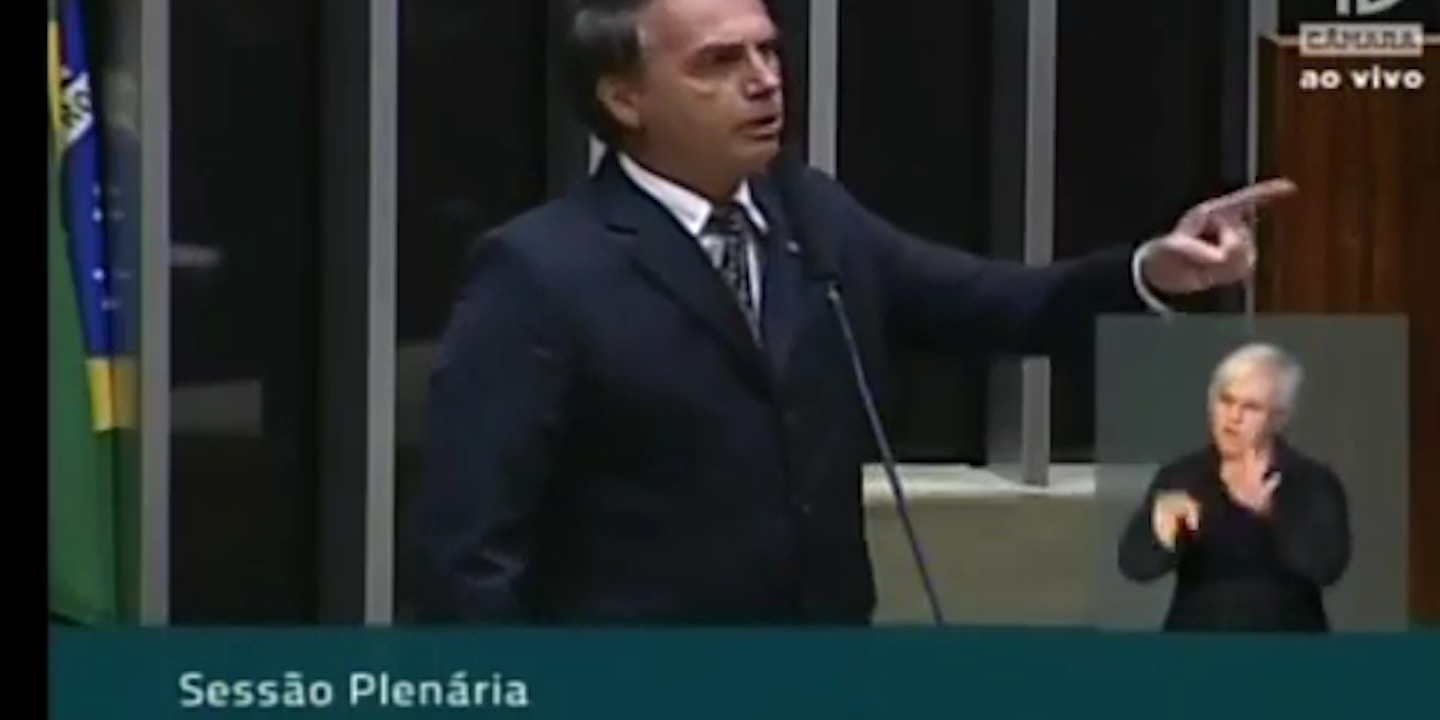 In the lower house of Brazil’s federal Congress on Tuesday, Maria do Rosário – a Congresswoman since 2003 from former President Lula da Silva’s Workers Party (PT) who is also the country’s former Minister of Human Rights under President Dilma Rousseff – stood to praise the National Truth Commission. That Commission was preparing to release a comprehensive report on the systematic human rights abuses perpetrated by the U.S.-supported military dictatorship that ruled the country for two decades until 1985. Congresswoman do Rosário described the military dictatorship as a source of “absolute shame” and condemned it for using murder, torture, sexual abuse, and other violence against dissidents. The Commission’s report was released yesterday in the presence of Rousseff, who was herself imprisoned and tortured by the military regime.

After do Rosário left the podium, Jair Bolsonaro – a right-wing Congressman since 1990 who served in the military during the dictatorship and is still an ardent defender of it –  stood to speak. He began by immediately demanding that do Rosário, who was preparing to leave the chamber, remain to hear him, yelling: “No, Maria do Rosário, don’t leave! Stay here, Maria do Rosário. Stay!” Referencing her statements about the well-documented use of rape by the military dictatorship against female opponents, he bellowed: “I would not rape you. You don’t merit that.” The meaning was clear, particularly in the original Portuguese: while some women are good enough to be so blessed, do Rosário wasn’t even good enough to deserve his rape.

As she moved to leave the chamber, he then again angrily screamed directly at her: “stay here to hear this!” After she left, he mocked her for leaving the assembly, saying that “she ran out of here.” The report’s release coincided with the United Nation’s International Human Rights Day. Referencing that, Bolsonaro said it should instead be called “the day of losers.”

It’s shocking and repulsive enough to have a woman be told – in a major nation’s Congress where she serves – that she’s not worth raping. What makes it even more sickening is that this is the second time Bolsonaro has said this to her. In her first year serving in the Congress, he screamed at her in a crowded hallway, telling her that she didn’t even merit being raped by him. He then called her a “slut” (vagabunda). And that time, for good measure, he also pushed her, then told her to “cry! go cry” – all in front of journalists who filmed the entire episode:

After this week’s speech, Bolsonaro took to Twitter where he gleefully boasted of his attack. Proudly posting a video of Tuesday’s “rape” speech as well as the prior incident where he shoved her, he wrote – referring to himself in the third person – “after lying about the military era, Bolsonaro puts do Rosário in her rightful place.” Bolsonaro’s personal website also now prominently features the same video at top of the page. He is clearly proud of all of this behavior.

This morning, do Rosário told The Intercept that while she is usually willing to speak publicly on all matters, she was concerned for her safety and feared speaking further about the episode because she’s been subjected to widespread threats. She said she was receiving numerous calls threatening violence against her. She did, however, vow in the Brazilian media to sue Bolsonaro. Her concerns are understandable, to put it mildly: in September of last year, Bolsonaro punched a senator after he tried to crash an event without an invitation.

In an interview today with The Intercept, Bolsonaro, despite boasting of both incidents and despite the clarity of the videos, denied having suggested that do Rosário was beneath being raped, asking: “do you think she’s good enough to be raped”? He also denied ever having pushed her, claiming she accosted him first. When asked whether he regrets calling her a “slut,” he refused to answer that question, instead angrily claiming that she first called him a “rapist” (there is no evidence that she did any such thing, though she has referenced the indisputable fact that the military regime subjected female opponents to rape and other violence). He said all of this was a by-product of PT’s desire to “play the victim.”

The nation’s current Minister of Human Rights and Policies on Women issued a statement yesterday saying: “it’s incredible that a Congressman would use his position to spout hatred and incite a crime,” one which “humiliates and degrades women.”

Every major democracy has its share of hateful bigots and cretins among its elected officials – the U.S. has had more than its fair share – but Bolsonaro is a unique national disgrace. He has a long history of revolting racism, homophobia and other assorted forms of bigotry to be expected of an admirer of military dictatorship.

In 2011, he said in an interview that he’d prefer that his son die in a car accident than be gay. In this 90-second excerpt from an interview by the BBC’s Stephen Fry, he responds to Fry’s referencing of the murder of gay Brazilian teens and frequent anti-gay attacks by stating that “there is no homophobia in Brazil,” claiming that 90% of the gay victims die in “places of drug use and prostitution or are killed by their own partner.” He added that the LGBT movement is really about converting Brazilian children into homosexuality for future sexual recruiting.

The same year, during an appearance on a television program, he was asked by a famous Afro-Brazilian actress, Preta Gil, what he would do if his son fell in love with a black woman, and he bizarrely replied: “I am not going to discuss promiscuity.” He then added that he doesn’t run that risk because his sons “are very well raised,” telling the actress that they “don’t live in the type of environment that you unfortunately do.”

After a female senator from the left-wing PSOL party (which includes prominent gay Congressman Jean Wyllys) requested that he be investigated, Bolsonaro said PSOL was a “party of dicks and faggots.” He added that he would respond to her “with toilet paper,” asked with mock sensitivity if he “injured her femininity,” and said she’s not like most Brazilian women. When a female television reporter earlier this year asked him about the investigation of the dictatorship, he screamed that she was an “uneducated idiot” and told her that she was not permitted to speak further. When President Rousseff advocated a program to teach school children to respect gays, he strongly suggested it was because she is a lesbian (“stop lying,” he said on the floor of Congress, and “admit your love with homosexuals”). Last year, he called the Minister for Women’s Policy, Eleonora Menicucci, a “big dyke.”

In one sense, Bolsonaro is the most extreme and repellent face of a resurgent, evangelical-driven right-wing attempt to drag the country backwards by decades, in exactly the opposite direction most other civilized countries are headed. Despite the country’s notorious record of violent abuse by police, he said expressly that he “defends torture” for drug dealers and kidnappers, who “have no human rights.” The Brazil-based journalist Andrew Downie, detailing this week’s incident, aptly describes Bolsonaro as “a hateful man who perhaps more than any other person exemplifies the backward side of Brazil that is still a huge and tragically worrying presence in this great nation.”

One of his current projects is support of a proposed law to ban same-sex couples from adopting children. When asked by The Intercept about this, he said: “If you want a baby so badly, why don’t you go and rent a woman’s belly?” He added: “don’t worry, soon homosexuals will be able to have a uterus implanted in them and then you can have a baby.”

In a country in which extreme poverty (though greatly diminished) is still widespread, and in which countless children are orphaned, living in the street, or hideously neglected, denying them a caring, loving, stable home is nothing short of demented. Subordinating the welfare of the neediest children to bigotry and religious dogma is simply evil. That’s Jair Bolsonaro, but that mindset is also sadly common in many cultures and societies, certainly including in the U.S.

But what isn’t common, what deserves universal scorn and condemnation, is Bolsonaro’s heaping of repugnant and obviously threatening misogyny on a female colleague on the floor of the Congress of one of the world’s largest and greatest democracies. In response to his assault on do Rosário, four parties in Brazil, including Rousseff’s PT, have demanded his expulsion from the house. Bolsonaro scoffed at that move, telling The Intercept that the request came only from “left-wing parties which idolize Fidel Castro, Che Guevara and Hugo Chávez.” But any other action, short of expulsion, would send a message that this kind of repulsively misogynistic behavior is acceptable in the Congress of Brazil.