AQAP never killed any of its foreign captives. At least until a Dec. 6 twilight raid by U.S. commandos. 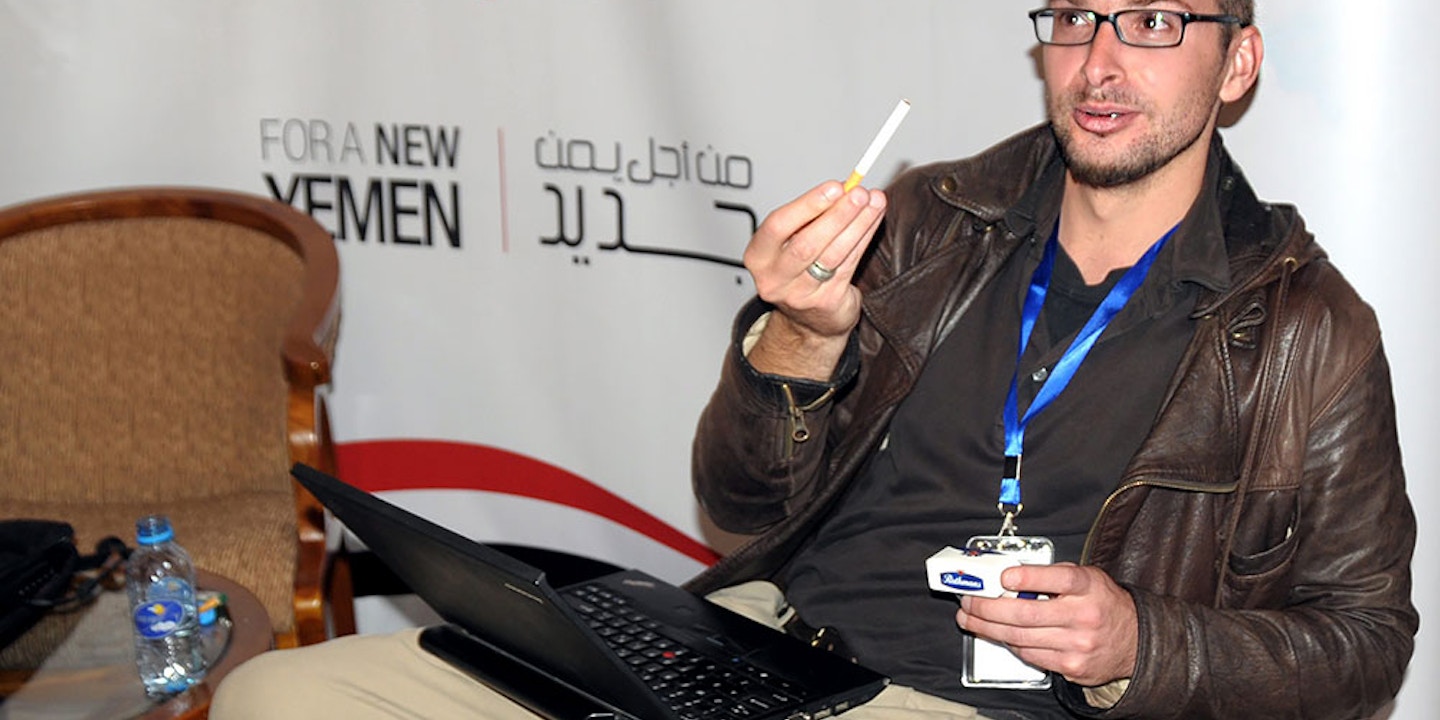 SANAA, YEMEN — The abduction of American photojournalist Luke Somers in Yemen’s capital in late September 2013 happened in an unlikely place. The British-born U.S. national had just exited Sanaa’s Al Huda Supermarket, a popular Western-style shopping center, when armed men wrestled him from the crowded sidewalk into an idling getaway car.

It was the latest in a spree of violent kidnappings of foreigners, which took place in the lingering power void left from a 2011 popular uprising that forced President Ali Abdullah Saleh to step aside. His successor, Abd Rabu Mansur Hadi, made strides in rebuilding the central government, but Yemen’s Al Qaeda franchise, known as Al Qaeda in the Arabian Peninsula, or AQAP, was also expanding its reach and influence, in part by ransoming foreigners to raise money.

But unlike the Islamic State, which in recent months has paraded a series of orange-clad foreign hostages in front of the camera just prior to executing them, AQAP had never killed any of its foreign captives. At least until 33-year-old Somers and a South African hostage, Pierre Korkie, were killed during a Dec. 6 twilight raid by U.S. commandos on an AQAP stronghold.

The raid followed a previous mission by U.S. Special Forces on November 25, which freed eight hostages, but failed to rescue Somers.

In a statement after the failed Dec. 6 operation to free the hostages, President Barack Obama said he had authorized the rescue mission because Somers’ life was in “imminent danger.”

But according to several sources in Yemen, Somers was not in immediate danger prior to the first raid launched to free him last month. Two of those sources also claim that the United States thwarted attempts by a mediator to negotiate his release by paying a ransom.

The murky world of hostage negotiations leaves few good choices, but Somers’ death  highlights the continuing tension the U.S. government faces when dealing with Americans kidnapped by Al Qaeda and its various affiliates and offshoots. It also calls into question the effectiveness of using military raids, rather than negotiations, as the primary tool to free hostages.

The U.S. response to the Somers’ kidnapping was disjointed from the start. In the month prior, the American embassy in Sanaa had been virtually emptied over heightened terrorist threats. Western journalists who knew Somers, rather than the State Department, served as the initial conduit of information.

Local media outlets widely reported Somers’ name and kidnapping, claiming they had received authorization from the State Department, despite what was supposed to be a media blackout. One State Department official expressed frustration over the handling of news about Somers’ kidnapping. “[I]n this bureaucracy I need magical powers, kryptonite — and prayer [to get an answer],” the official wrote in an email to a reporter, when asked to confirm a media blackout.

The family, in the meantime, was advised by the FBI not to raise a public campaign, but was given “very little information” from the U.S. government throughout his captivity, Luke Somers’ stepmother, Penny Bearman, told The Intercept.

“It was absolutely awful, the silence,” she said.

For the next year, Western media largely held to the blackout, as negotiations were conducted between a mediator and AQAP for the release of Somers and Korkie, who had been held since spring of last year, according two sources affiliated with AQAP. Both sources maintain that negotiations broke down in April, however, when the U.S. government blocked the talks.

The negotiations went so far as to reach an agreement on a price for the two hostages, which would be paid by a third party, according to one of the AQAP sources. The source did not identify the third party—and declined to discuss the agreed ransom amount on the record—but in the past the Omani and Qatari governments have served as intermediaries and have paid to release hostages held by the Islamic State and AQAP. The embassies of Oman and Qatar in Washington did not respond to questions from The Intercept.

The National Security Council and the State Department declined to comment on any involvement by a third party in negotiations or ransoms. Asked about a third-party offer, Yemeni government spokesman in Washington, Mohammed Albasha, said he was “not aware of such talks.”

Bearman, Somers’ stepmother, said the family didn’t know about any negotiations.  Bearman and Luke’s father, who live in the U.K., had also reached out to British authorities, but they were told the U.S. was handling the situation.

On November 25, U.S. Navy Seals conducted a raid in Yemen’s eastern province of Hadhramaut in an attempt to free Somers. Seven Yemeni hostages and one Ethiopian were freed, but AQAP had already moved Somers, Korkie and other captives to another location. Seven kidnappers were shot dead by the U.S. commandos during the operation.

Following the raid, AQAP released a video message on Dec. 3 that showed Somers pleading for help. “I’m certain that my life is in danger,” he said in the video.

Also appearing in the video, Sheikh Nasser al-Ansi, an AQAP leader, referred to the failed operation in Hadhramaut, and warned that Somers would face his “inevitable fate” in three days if the group’s demands were not met. No specifics demands were outlined, however.

Hoping to re-open communications with the militants, Somers’ brother, Jordan Somers, and mother Paula Somers, released a video Dec. 4, following the first raid. “Please show mercy and give us the opportunity to see our Luke again, he is all that we have,” Somers’ mother said.

In the video, Jordan Somers said they had “no prior knowledge” of the US raid carried out on November 25.

Two days later, on Dec. 6, several dozen U.S. Special Forces loaded onto V-22 tilt-rotor aircraft, and flew to Yemen’s southern province of Shabwah. Backed up by drones and fighter jets, the commandos fought with local tribesmen and AQAP militants before entering a house in the village of Daffar, Abadan district.

No Threat to Life

While the U.S. military raids were justified by the threat on Somers’ life, a Yemeni intelligence official, who asked to remain anonymous, said that they had “no information, or intelligence that al Qaeda was about to kill any hostages before the Nov. 25 raid.”

One of the AQAP sources also told The Intercept that the militant group had no plans to kill the photojournalist prior to the first attempt to rescue him. “There was no risk to Luke Somers’ life; his life was not in danger from AQAP before the first US raid,” the source told The Intercept.

In a tragic twist, the Gift of the Givers Foundation, which had been negotiating separately with the militants for the release of Korkie, said the South African aid worker was due to be freed on Dec. 7. In a statement on their website, the disaster response charity said it was in the final stages of preparing logistical arrangements to bring Korkie home.

Korkie was kidnapped along with his wife, Yolande, in May of last year. His wife was released in January due to concerns over her health.

Imtiaz Sooliman, the director of Gift of the Givers Foundation told The Intercept that in the midst of negotiations in early November, tribal leaders informed the organization that they would have to delay a meeting with AQAP, “because some of their members were killed in [a] drone strike.”

“[P]aying ransoms would only sustain the very same terrorist organizations that we are working to destroy,” said Jen Psaki, a State Department spokeswoman, during a Dec. 8 press conference. “So nothing has changed on that front.” Al-Huda Supermarket, the location where Luke Somers was kidnapped.

Kidnappings have long been commonplace in Yemen, where disgruntled tribes abduct foreigners as bargaining chips to resolve disputes with the central government. Those kidnappings usually end quickly, with abductors releasing captives unharmed, often in exchange for imprisoned family members.

Somers’ abduction exemplified a more recent trend, however, in which mercenary kidnappers sell foreigners to AQAP, which in turn demands large ransoms in exchange for their safe release. A Finnish couple and Austrian student were kidnapped in 2012 and sold on to the militant Islamic group; all three were later released.

AQAP is also believed to be holding an Iranian diplomat and a Saudi Arabian deputy consul, snatched in March 2012; a British oil-worker kidnapped in February this year is also still missing.

While acknowledging its role in ransoming hostages, AQAP has also tried to distinguish itself from the Islamic State in Syria and Iraq, whose videos have featured captives condemning U.S. policies, followed by bloody executions. AQAP claims it doesn’t torture its hostages.

On Monday, AQAP released a video of al-Ansi, the AQAP leader, condemning the Islamic State’s use of beheadings as “savage” acts and denouncing videos showing violent executions, calling it “a big mistake and not acceptable.”

Somers’ death underscores what some see as a glaring flaw in America’s policy toward dealing with victims of kidnapping in the Middle East. European captives have often been freed through secretive multi-million dollar transactions, while Americans have languished. Ransoms are credited with sparing lives, but at the cost of enriching Al Qaeda and its cohorts–an unacceptable tradeoff in the eyes of the U.S. administration.

Yet the U.S. government’s “no ransom” policy also limits options for freeing hostages, leaving military raids as the only viable alternative. When successful, the raids can free hostages, depriving militant groups of ransom income, but they all risk the lives of hostages, who have been caught in the crossfire, or killed by their captors in revenge.

“My instinct was that we could have raised a ransom and perhaps worked with another country, but we didn’t know what was going on,” said Penny Bearman, Somers’ stepmother. “My feeling now is that all the strategies [for freeing hostages] seem to be really egocentric around individual government’s policies.”

One of the AQAP sources said that the death of seven of its members in the late November U.S. raid had angered the group, though it’s unclear what the consequence would have been for Somers. Even after the November raid, no decision had been made to execute Somers, the source insisted.

“The group leadership is not, you know, vampires,” he said.