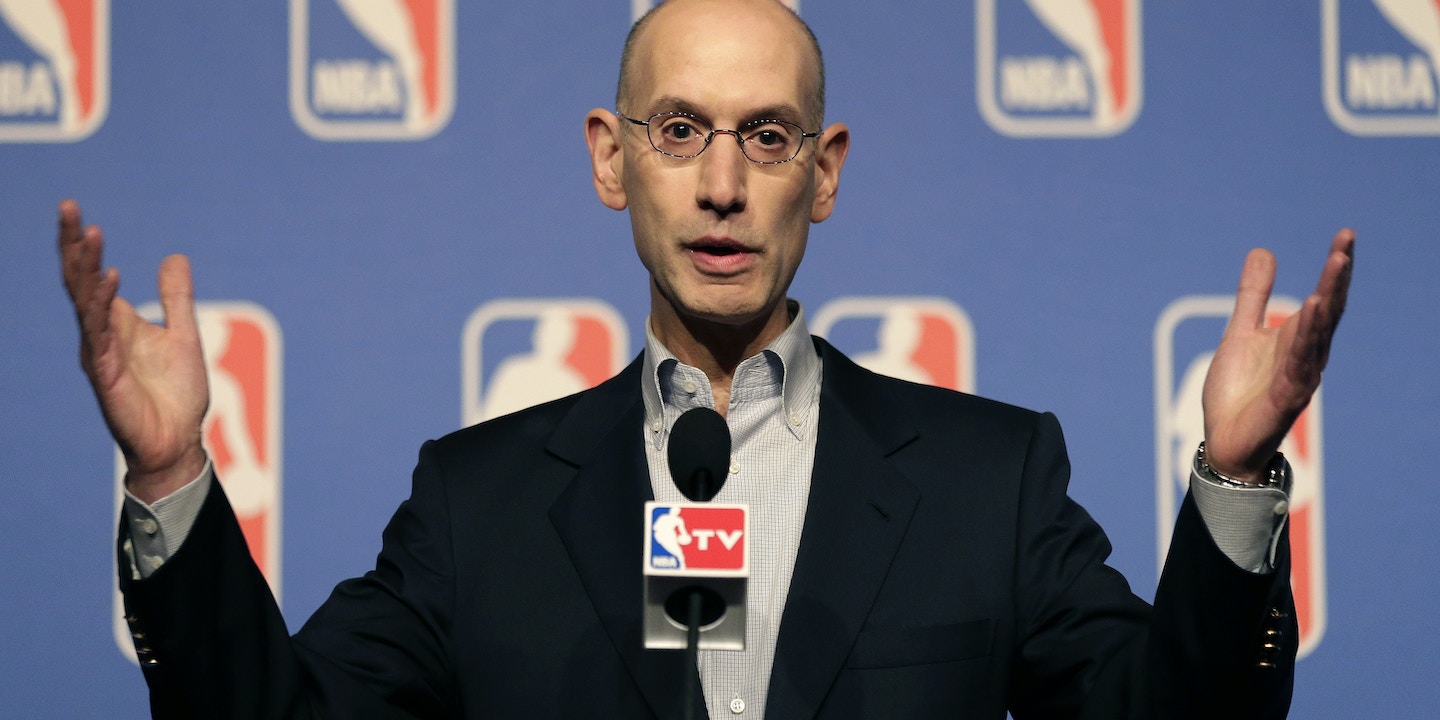 Just seven months ago, National Basketball Association commissioner Adam Silver looked like a decisive actor in the fight against racism. He was widely praised for his decision to ban Los Angeles Clippers owner Donald Sterling for life over racist comments Sterling made to his girlfriend. “Everyone though Silver would take a half measure,” wrote one commentator. Instead, he went all in against Sterling, adding a $2.5 million fine to the lifetime ban.

But today it’s hard not to wonder if Silver was brave or just acting as an opportunistic corporate figurehead, responding in a coldly calculated fashion to the overwhelming national outrage directed at Sterling. Because earlier this week, when NBA players warmed up wearing “I Can’t Breathe” t-shirts in solidarity with the family of Eric Garner, Silver’s righteous side was nowhere to be found. Instead, he turned into a narrow-minded scold.

Garner, a black man, famously died after New York police stopped him on suspicion of selling bootleg cigarettes and, despite the fact that he was unarmed, placed him in a chokehold, a position the force banned 20 years ago. A grand jury recently declined to indict the officer who placed him in the chokehold, sparking nationwide protests, often under the banner of Garner’s last words, “I Can’t Breathe.”

Those words spilled onto the court when Chicago Bulls star guard Derrick Rose wore the shirt during pre-game warmups on Saturday and LeBron James, the league’s most popular figure and considered by most as still its best player, vowed he would do the same.

Asked by reporters about the politicized shirts, Silver gave a lawyerly response that seemed calibrated to please his corporate overlords: “I respect Derrick Rose and all of our players for voicing their personal views on important issues, but my preference would be for players to abide by our on-court attire rules,” he told reporters.

The clothing rules Silver was alluding to are in the NBA’s rulebook, which states on page 60 that “while playing, players must keep their uniform shirts tucked into their pants, and no T-shirts are allowed.” It’s not at all established that those rules apply to warm ups; nowhere does the rulebook prohibit players from wearing t-shirts before the game.

Whether he was technically wrong or right about the rules, Silver threw away an opportunity to show players he respects them as much as he does his NBA bosses. The Eric Garner story has been one of the rare, big racial events that has not been entirely polarizing, with even conservatives like George W. Bush baffled that a grand jury failed to indict officers caught on camera allowing Garner to die while he was in a chokehold. It’s a story that has enraged Americans of all colors. If ever there was one situation where a sports league could stand firmly behind its players, the modest protests of NBA players’ “I Can’t Breathe” warm-up shirts were it.

Silver, a graduate of University of Chicago law school, is eloquent enough that he could have delicately walked the line between verbally supporting the spirit of what the players are doing while nodding at the importance of the official rules. There could have been no rational objection if Silver had said, “While our rules of on-court attire have not changed, we do understand this is an extraordinary moment and fully respect the players exercising their right to speak out on important issues.”  Instead, Silver put his narrow interpretation of the rules squarely above the deeply felt convictions of players.

Not that this deterred the players. Los Angeles Lakers star Kobe Bryant and his teammates brushed off the commissioner’s comments and also wore their “I Can’t Breathe” shirts during pre-game warmups Tuesday evening. It was a fitting irony that the Lakers’ players wore the shirts, considering they play in the Staples Center, also home to Sterling’s Clippers.

Of course, this isn’t the only time American athletes, including NBA players, expressed their public views on social issues. Hall of Famer and Boston Celtics legend Bill Russell was a prominent figure in the Black Power and Civil Rights movements of the 60’s and supported legendary boxer Muhammed Ali’s decision to boycott American service in the Vietnam War. Outside the NBA, the famous John Carlos and Tommie Smith “Black Power” clenched fist moment on the podium of the 1968 Summer Olympics in Mexico City also resonates as another example of athletes taking a public political stand. And Silver got a glimpse of what he should have expected this week when NBA players, from James to all the way down, threatened to boycott the rest of the 2013-14 season back in April if Sterling was not stripped of his ownership.

The rich history of player activism could have served as a forewarning to Silver that he’d sound like a robotic fool trying to throw the rulebook at players in racial justice t-shirts. The “I Can’t Breathe” T-shirts were a social lay up for him in the basket. Instead, it served as a lay up he widely missed.