The Latest Twist in the Bizarre Prosecution of Barrett Brown 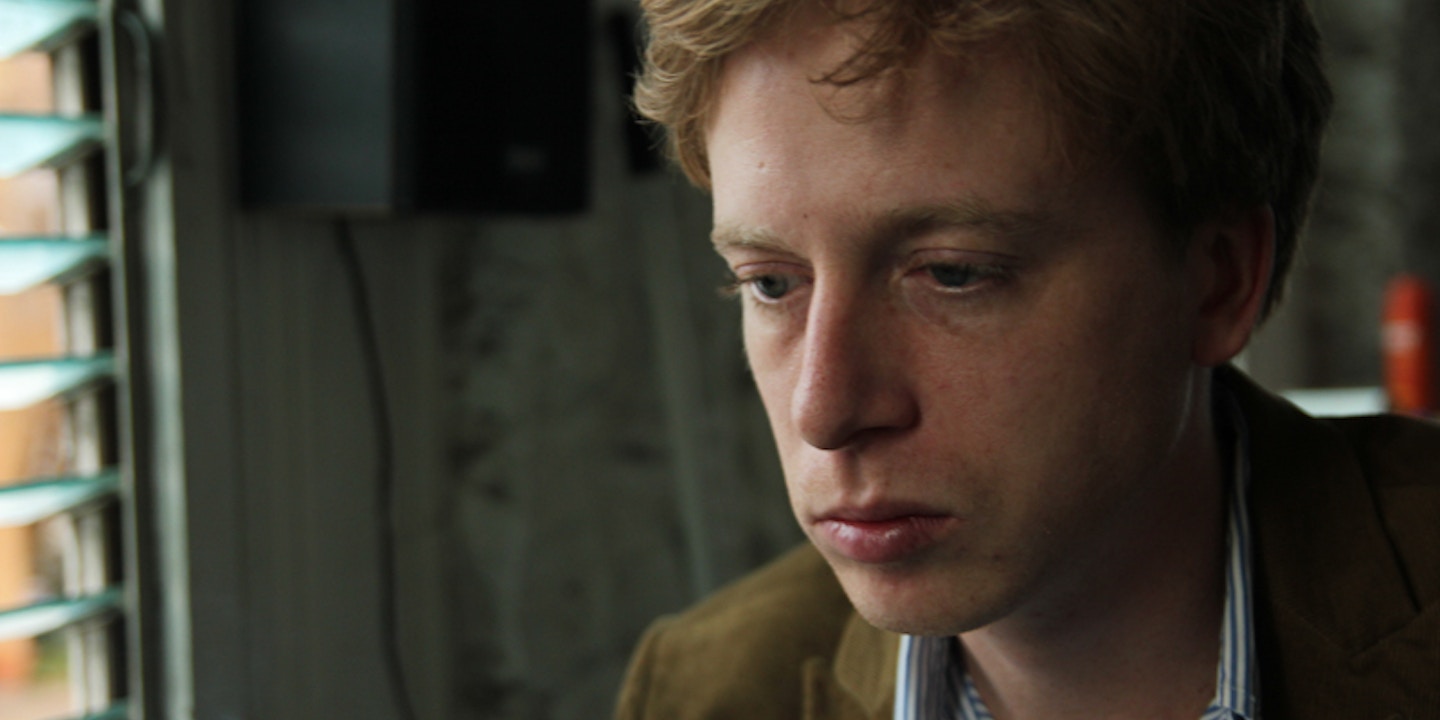 DALLAS, Tx.—Barrett Brown entered the federal courtroom shackled, with a slight swagger in his step and squinting into the light. He took his seat next to his defense team and quietly set about flipping through a stack of loose-leaf papers and then began writing. When asked by the judge if he knew why he was in court that day, Tuesday, Brown – who has spent two years in federal custody – leaned into the microphone and with a warbly Texas accent, said clearly and plainly, “I am to be sentenced today.” And then he returned to his papers.

Wearing a prison-issued orange uniform, the 33-year-old Brown scribbled for hours as a federal prosecutor attempted to portray him, not as a freelance journalist whose work has appeared in The Guardian, Vanity Fair and the Dallas-based Dmagazine, but instead as a spokesman, strategist and contributor to the hacktivist collective Anonymous. It was the final phase of a criminal prosecution that at one point threatened Brown with more than 100 years in prison, as a result of his work on thousands of files hacked by Anonymous from the servers of HBGary Federal and Stratfor, security intelligence firms and government contractors. Through the online collective he founded, called Project PM, Brown analyzed and reported on the thousands of pages of leaked documents. The HBGary hack revealed a coordinated campaign to target and smear advocates for WikiLeaks and the Chamber of Commerce, while the Stratfor hack provided a rare window into the shadowy world of defense contractors.

The hearing followed a plea deal negotiated with prosecutors last spring, in which Brown agreed to plead guilty to charges related to threats he made in a YouTube video against an FBI agent named Robert Smith, as well as to a misdemeanor obstruction charge for attempting to conceal two laptops when FBI agents arrived at his mother’s home to execute a search warrant. A third charge, accessory after the fact, stemmed from an offer Brown made to the hacker Jeremy Hammond, to contact Stratfor to see if the firm wanted redactions of the hacked materials. Brown faced up to 8 ½ years in prison for these charges.

But in court, the question of who Barrett Brown really is—and the real nature of his work—consumed and drew out what typically would be a brief sentencing hearing at the U.S. District courthouse near Dealey Plaza. The YouTube video represents the most serious charge against him; in it, Brown says he is suffering symptoms of withdrawal from Suboxone, the drug he used to control his heroin addiction, and becomes angry when discussing the FBI raid on his mother’s home and the government’s related charges against her. He threatens to “look into” FBI Agent Smith’s kids and “ruin” his life.

Yet the video was not presented in court. U.S. Attorney Candina Heath instructed Agent Smith to read excerpts from some 60 exhibits, mainly excerpts from chat conversations and emails found on Brown’s computers. In them, Brown described himself as a “former journalist,” a “pseudo journalist” and strategist for Anonymous. The government seized on statements by Brown saying his wiki, Project PM, “laundered people for Anonymous.” One private chat said that Project PM had been divided into two groups, with one faction, led by Brown, dedicated to “revolutionary” activities.

The prosecution has been extraordinary for several reasons, chief among them the unusual secrecy surrounding the evidence used against him. That secrecy was on full display at Tuesday’s hearing, as much of the evidence referenced by the prosecutors was inaccessible to the public. The evidence that was discussed was often selectively disclosed by prosecutors, who tore from their original context lengthy chats and emails to depict Brown as a malicious hacker rather than a journalist.

The proceeding itself far more resembled an aggressive prosecution than it did a standard sentencing hearing. Prosecutors repeatedly attacked Brown based on allegations that had long ago been dismissed, seemingly attempting to malign his character based on charges that he no longer faces and for which he was never convicted.

Brown’s defense attorneys objected to much of the material presented by prosecutors, saying it was not relevant to the charges against him. The full transcripts of the cited chats and emails taken from Brown’s laptops have not been made public, as many of the documents related to the case have been placed under court seal. Reviewing the voluminous files took much of the day, prompting Judge Sam A. Lindsay to announce that Brown’s sentencing hearing would be continued to January 22.

The decision was met with visible dismay from family and supporters, angered that Brown, who has already spent two years in jail, will have to spend at least another holiday season with his fate undecided. Abetted by a deliberate prosecution strategy to make the proceedings as protracted as possible, the judge pushed off sentencing for weeks, seemingly in no rush to resolve the charges against a defendant who has lingered in jail.

More alarming were old claims resurrected by prosecutors about a link Brown posted in a chatroom and then on a file sharing website. The link led to a cache of credit card information exposed by the hack; prosecutors claimed that posting the link constituted complicity with the hack itself—as well as subsequent exploitation of the credit cards. “It doesn’t matter the number of hands it passes as long as they know its stolen property,” argued Heath, the prosecutor. Each one, she said, “steals it further.”

Prosecutors said that 113 identifiable victims had suffered credit card fraud totaling some $18,000 in the days after Brown posted the link. Despite extensive discussion by prosecutors about the material, it remained unclear that any fraud occurred as a result of Brown’s linking to the data.

Defense attorneys reiterated their argument that by posting a link, Brown had simply pointed in the direction of the data, which was available on another site and in the public domain. It was the attempt to criminalize his posting of a link to this data that made Brown’s case a cause célèbre among journalists and press freedom activists following his arrest in September 2012.

The prosecution’s claim about the link “has serious repercussions to journalists, researchers, people who link to public information,” Cadeddu told the court. “The government’s argument should chill the bones of every journalist and every researcher.”

“Looking at that as criminal conduct would probably bring an end to all digital journalism, period,” defense attorney Ahmed Ghappour, who directs the Liberty, Security and Technology Clinic, at the University of California Hastings College of Law told me. “There would be no reporting on leaks.”

Marlo P. Cadeddu emphasized that Brown had been unaware the cache contained credit card documents, citing a chat transcript in which he wrote, “what’s exactly is in that download?” Elsewhere, Brown wrote that “the emails will reveal a great deal about a lot of important subjects including wrongdoing by states and institutions,” specifying “mass surveillance [and] cutting edge disinformation techniques.”

During the sentencing hearing, Judge Lindsay noted that the court had received over 100 letters from Brown supporters. (That includes The Intercept‘s Glenn Greenwald, who along with a number of his First Look Media colleagues, is a vocal supporter of Brown and has written critically about the prosecution.) In the final hour of the hearing, Judge Lindsey said that both sides had presented material of “minimal value.” Instead, the day had been devoted to dueling images of Brown. There was Brown the investigative journalist and author, committed to exposing institutional malfeasance and the cyber industrial complex. There was Brown who in messages and chats described his work as part of a revolution, an asymmetrical cyber war and his role as that of an Anonymous strategist, propagandist, and pseudo journalist. And then there was Brown the self-described troll.

The last descriptor posed the greatest potential conundrum, giving the defense leverage by introducing the possibility that statements made by Brown such as “Anonymous is mine” were simply part of a culture that revels in pranks and projecting a mischievous public persona.

Citing chat logs and emails, Agent Smith, who acknowledged that he was not part of the investigation into the Stratfor and HBGary hacks, testified that there was evidence some hackers had become angry at Brown for taking undue credit for hacks and for being “self-aggrandizing” in his role with Anonymous.

Smith also said that Brown lacked hacking skills—not the only suggestion that Brown lacked technical prowess. At one point, a reference was made to Jeremy Hammond, who orchestrated the Stratfor hack, admonishing Brown for failing to use encrypted messaging. Quinn Norton, a journalist who became embroiled in the aggressive—and ultimately tragic—federal prosecution of Aaron Swartz, testified that Brown was well-known among members of Anonymous (known as “Anons”), but when asked whether he occupied a high status within the group, she explained that status was related to skills and Brown, evidently lacked high currency skills. She also echoed Smith’s assessment that Anons had resented that he tried to take credit for operations he did not participate in. On one occasion, she said, Brown had been criticized and booted from an Internet Relay Chat.

At the end of the day, it remained unclear whether the arguments and evidence will even influence the ultimate sentence. As the hearing concluded, Brown tucked away the loose-leaf pages he had spent the day working on. His words will be reserved for another day. After the marshals shackled him, he nodded in the direction of his family and shuffled out of the courtroom with a bit less swagger but with the same squint in his eye, returning to a jail cell he has occupied for more than two years.