French police are converging on the town of Villers-Coutterets after reports that the two Cherif brothers were spotted there. 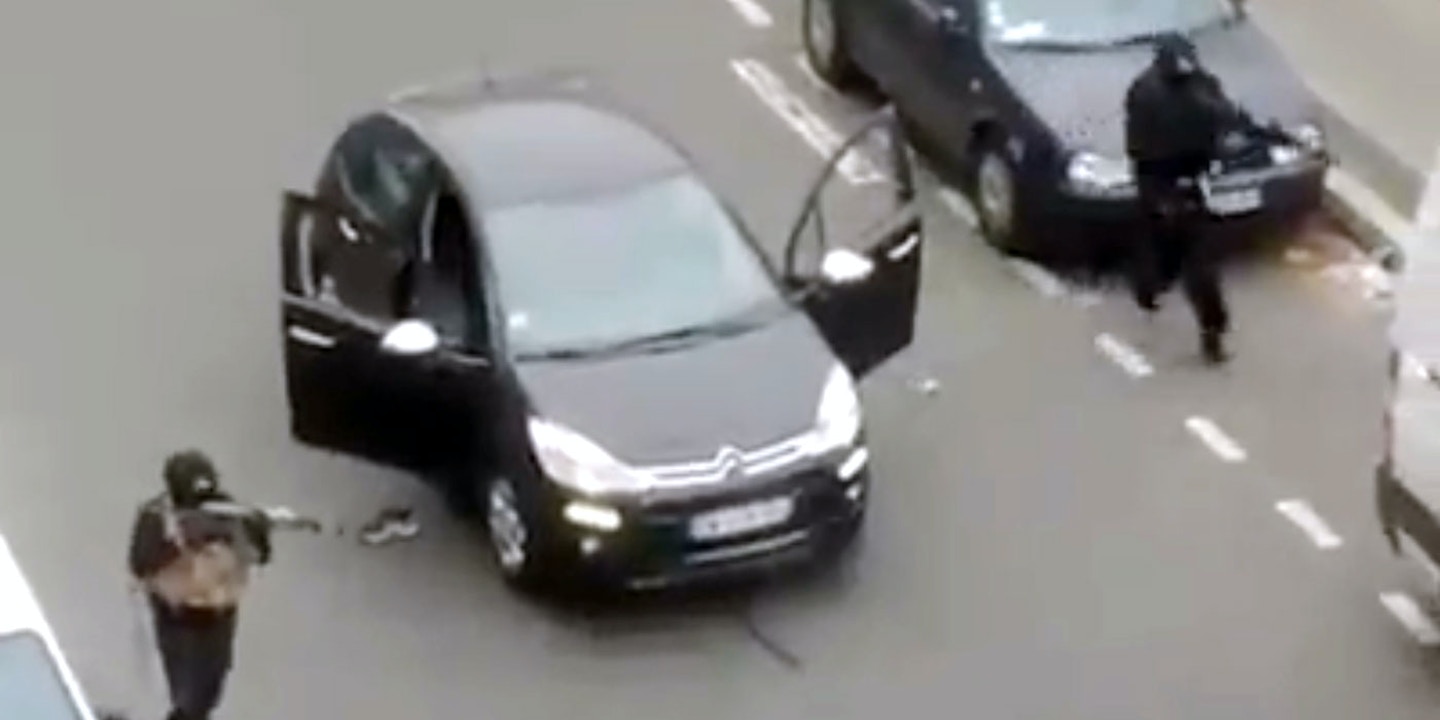 Multiple gunmen are believed to be at large following a deadly attack on the offices of the satirical Paris newspaper Charlie Hebdo. Early reports indicate that as many as 12 people may have been killed, including several employees of the paper, its editor-in-chief, and police officers nearby.

Amateur video footage purportedly from the scene of the attack appeared to show two armed, masked men executing a police officer laying prone on the sidewalk. The men are then seen escaping in a black car parked nearby. Initial police reports have indicated that at least three men are believed to have been involved in the assault.

French President Francois Hollande stated that the incident is “a terrorist attack without doubt”, and has placed Paris on the highest possible terror alert while the suspects remained at large. French Interior Minister Bernard Cazeneuve also said that all appropriate steps would be taken to “neutralise these criminals”.

While initial reports have not yet offered any definitive conclusions about the motives for the attack, Charlie Hebdo has been the target of Islamic extremists over its repeated publication of satirical images of the Prophet Muhammad. In 2011 its offices were firebombed the day after it named Muhammad the putative “editor-in-chief” of its forthcoming issue. At the time, Stephane Charbonnier, one of the cartoonists reportedly killed today, stated his belief that the attack was not the responsibility of French Muslims but of “idiot extremists”.

Highlighting the confusion surrounding the assault at the moment, conflicting analyst reports have suggested that the attackers may have been speaking anything from an Eastern Slavic language to Maghrebian Arabic.

Eyewitnesses at the scene of the attack claimed that the assailants instructed bystanders to “Tell the media that this is al-Qaeda in the Yemen.” A 2013 edition of Al Qaeda’s Inspire magazine had also placed the editors of the publication on a hitlist of media figures and politicians.

Update (12:12PM): Videos showing scenes from the attack overlayed with nasheed music commonly associated with the Islamic State have appeared on social media sites. Images lauding the attack and associating it with the group have appeared as well. So far, however, none of these indicate an official claim of responsibility from the group, and previous lone wolf attacks have also been opportunistically seized upon by ISIS supporters to help bolster their cause.

Update (12:26PM): Several analysts have commented on the apparent professionalism and training demonstrated by the assailants in carrying out this attack. Former White House counterterrorism advisor Richard Clarke stated “They were people who did not look like they were wild, on some kind of spree, but who were accomplishing a military operation”, adding, “this doesn’t equal a group of rogue, angry guys.”

Clint Watts, a national security fellow at the Foreign Policy Research Institute, has also written a detailed initial analysis of possible perpetrators of the attack, writing that “significant reconnaissance was conducted which suggests a well-planned operation more consistent with a directed plot”.

Update (12:44PM): An eyewitness report on the French news site l’Humanite describes the experience of one woman who encountered the attackers before the rampage began (English translation):

“I was going to get my daughter at the daycare, and while arriving in front of the entrance of the newspaper building two armed men wearing [balaclavas] brutally menaced us. They wanted to enter, to go inside. I tapped the security code. They fired on Solinski, Cabu…This went on for five minutes. I hid under a desk. They spoke perfect French and said they were from Al Qaeda.”

Update (1:03 PM): Widescale protests across France demonstrating solidarity with Charlie Hebdo have begun to be reported on social media. Tens of thousands of people are reported to have turned out to protests at the Place de la République in Paris, and at other protests in Lyon and Toulouse. 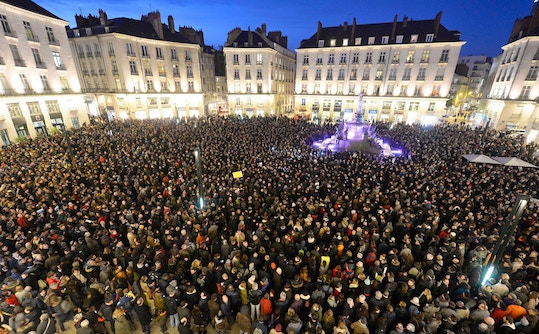 The Committee to Protect Journalists has also released a statement describing the attack as “a brazen assault on free speech in the heart of Europe”.

Political and religious leaders from around the world have expressed condemnations of the attack. The White House issued a statement condemning the attack, with John Kerry saying that he agreed with one French imam’s characterization of the victims as “martyrs for liberty“. The Arab League and officials from Al Azhar University have expressed condemnations and described the assault as a “criminal act”.

Update (1:10PM): An audio recording of a statement from Philippe Val, former director of Charlie Hebdo, has been broadcast by France Inter. A full transcript (Fr) of his statement is available here. An English translation of an excerpt is as follows:

“I’m doing quite badly, but that’s normal, no? I’ve lost all my friends today….”

“It would be good to if tomorrow the newspapers call themselves Charlie Hebdo, if we title everything Charlie Hebdo, if all of France calls itself Charlie Hebdo. This will show that we’re not okay with this, that we’ll never accept it. We’ll never let go of liberty. (voice cracking) These were absolutely marvelous people…”

Update (1:28): Eyewitness reports Tweeted earlier in the day suggested that the attackers had mistakenly attempted to enter the wrong office before finding Charlie Hebdo:

Translation: “The scouting of Charlie Hebdo was very imprecise, they first got the wrong doorway and address.”

Translation: “The attackers came to the wrong door. They came to number 6 before entering number 10.”

These reports appear to contradict earlier analyses which had suggested the attackers had conducted thorough reconnaissance of their targets.

Update (3:16PM): French media reports have circulated claiming to identify the three shooters as Saïd Kouachi (age 34), Chérif Kouachi (age 32) and Hamyd Mourad (age 18). Saïd and Chérif Kouachi are said to be brothers native born to France, while Mourad’s nationality is unknown. Police have also reportedly conducted raids on two apartments in the efforts to track down the shooters. Update (3:35PM): Chérif Kouachi, one of the alleged assailants in today’s attack, was sentenced to three years in prison in 2008 for attempting to travel to Iraq and join the insurgency active there at the time. As Bloomberg News reported at the time of his sentencing:

“Kouachi said on the stand that he was inspired by detainee abuse by U.S. troops at Baghdad’s Abu Ghraib prison, though he was relieved he was stopped….[he] alternated between periods of smoking marijuana and attending Benyettou’s classes, said he’s now working in a supermarket and his main interest is rap music.”

Update (6:40PM): NBC reports that one of wanted suspects has been killed, two others are in police custody. Anonymous government officials also alluded to AP about the assailants alleged foreign ties:

“One of the officials, who spoke on condition of anonymity because they weren’t authorized to publicly discuss the investigation, told The Associated Press that the men were linked to a Yemeni terrorist network.”

Update (7:32): New details about the raid which resulted in the death and capture of the Hebdo attackers, as well details about suspect Chérif Kouachi, have come to light. The Telegraph reports that elite French special forces tracked the trio to a neighborhood in the eastern French city of Reims, where the raid was executed at 11PM local time.

The suspects were tracked by authorities after their ID’s were found in an abandoned getaway car discovered after the attack.

Vincent Ollivier, Cherif’s lawyer in the 2008 case where he was convicted of attempting to join the Iraqi insurgency, described his former client as a casually religious individual who was radicalized by the 2003 invasion of that country:

“He smokes, drinks, doesn’t have a beard, and has had girlfriends,” said Mr Ollivier. He described himself as an “occasional Muslim”.

But the war in Iraq shocked Cherif, and he was said to be angered by treatment of Muslims at Abu Ghraib prison.

It was against this backdrop that he was pushed towards a jihadi recruiter.”

Update (10:12PM): Contradicting earlier reports of the capture and killing of the Charlie Hebdo attackers, U.S. counterterrorism officials now say “they can not be certain of the status of the three suspects”.

Conflicting reports have also surfaced suggesting that the youngest of the three suspects, Hamyd Mourad, may have turned himself in to authorities.

Update (10:39AM): French counterterror police are converging on the small town of Villers-Coutterets after reports that the two Cherif brothers were spotted at a gas station there.

It has also been confirmed that the younger suspect, brother-in-law to one of the wanted men, has turned himself in to police after seeing his name reported on social media in connection with the attacks.

We’ll continue to update this post as the situation develops. Our colleagues at reported.ly are aggregating additional information as it becomes available.