Andrew Brannan had twice been hospitalized and was living “a marginal, fearful life” in the woods when he fatally shot a Georgia deputy sheriff in 1998. 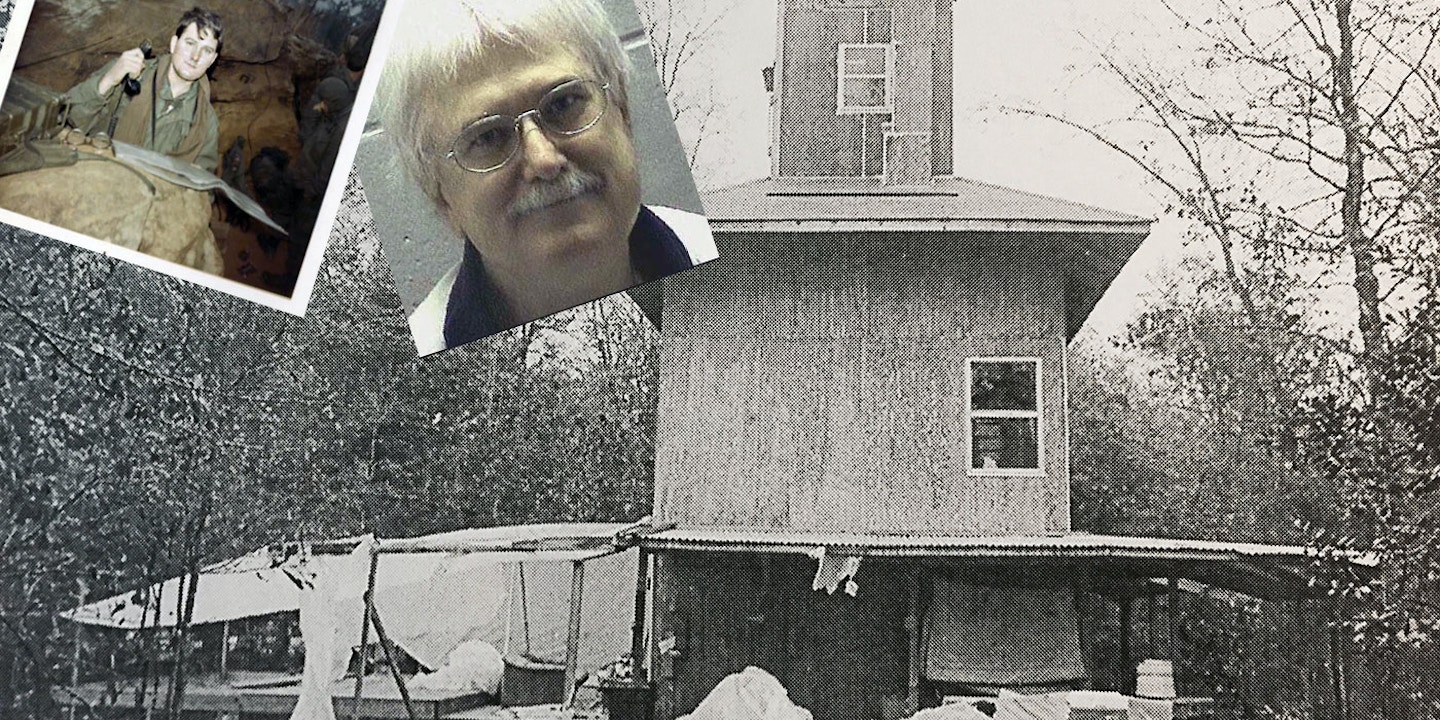 JACKSON, Georgia – In the first execution carried out in the US in 2015, last night Georgia put to death a decorated Vietnam War veteran who had been diagnosed with severe mental illness before he killed a deputy sheriff after a traffic stop in 1998.

On Tuesday, at the Georgia Diagnostic and Classification Prison, 66-year-old Andrew Brannan received visits from five family members, one friend and a pastor. He told reporters that he had been “in a status of slow torture” in the decade and a half since the crime, and said he was not sad to be leaving the prison.

Outside the facility, guards cordoned off one area of the wet, cold grass for anti-death penalty activists. A different section was designated for members of law enforcement who came to honor the memory of slain Deputy Sheriff Kyle Dinkheller. But the feelings on the execution between the two groups were not so clearly separated. Some in law enforcement seemed genuinely concerned about Brannan’s history as a veteran.

“There were a lot of troubling things that happened back then,” said Tom McCain, a close colleague of Dinkheller’s. “Not only did [soldiers] have to deal with the horrors of war but they came back to a country that didn’t appreciate them.” McCain added that he had “no problem” with Brannan’s execution, but he also questioned the death penalty in general. He praised Dinkheller as an officer deeply concerned about ethics in law enforcement. “I miss the hell out of him.”

That Brannan killed deputy Dinkheller 17 years ago is not disputed. A camera in the deputy’s police vehicle caught the confrontation between the two men after Dinkheller pulled Brannan over for going 98 miles an hour in his white pickup truck. The two pulled off Interstate 16 and onto a rural, tree-lined stretch of road.

In the video, the two men get out of their vehicles and initially exchange pleasantries. Dinkheller instructs Brannan to take his hands out of his pockets.

“Fuck you, goddamnit! Here I am, shoot my fucking ass!” Brannan yells, dancing and flailing his arms in the street. “Here I am, shoot me!” he sings as he dances. Brannan rushes toward Dinkheller, and the officer orders him to step back. “I am a goddamn Vietnam veteran!” says Brannan.

The veteran then returns to his car and rummages inside of it. Dinkheller yells, “I am in fear for my life!”

Brannan emerges with a .30 caliber M1 carbine. In the ensuing shootout, Deputy Dinkheller was hit at least nine times. He left behind a young child and an expectant wife.

Brannan was found hiding in the woods the next morning, with a gunshot wound to his abdomen.

In 2000, a jury in Laurens County, a quiet region in southeast Georgia known for historical architecture and deer hunting, found Brannan guilty of malice murder and recommended the death penalty. The video was a key piece of evidence. Since then, it has been been widely shown in police academies to train cops on how routine traffic stops can spiral out of control.

But lawyers for Brannan have argued that the jury did not understand well the journey that led him to that January confrontation. It was one marked by survivor’s guilt, personal loss, isolation and increasingly severe diagnoses for mental illness following a short but intense time serving in the Vietnam War. Though several medical professionals testified at trial, Brannan’s VA psychiatrist did not. Atlanta defense attorney Joe Loveland, who did not represent Brannan at trial, said he believes the psychiatrist’s testimony, and the fact that Brannan had not taken his prescribed medications in the period leading up to the murder, should have been presented to the jury.

Loveland said that when Brannan was sentenced, he did not benefit from the compassion and understanding that Americans increasingly have about PTSD after two foreign wars in the post-9/11 period. “We as a country know so much more about PTSD and the effects of war after 14 years,” he said, referring to the length of the war in Afghanistan – America’s longest.

Brannan volunteered for the army in 1968 and was trained as a parachutist. He served in Vietnam from 1970 to 71, and saw extensive combat. Twice he took charge of his unit after his commanding officers were killed. He would later recount to his psychiatrist several situations of how he narrowly escaped death during the war.

Brannan was honorably discharged in 1971. He received the Bronze Star and two Army Commendation medals for his service.

But as he returned to civilian life, deep psychological and personal problems emerged in Brannan’s life. His lawyer said he could not hold down a job and his marriage fell apart. One of Brannan’s brothers was killed in active duty and another committed suicide. In 1984, he was granted partial disability for service-connected Post Traumatic Stress Disorder (PTSD). By 1991, the Department of Veterans Affairs determined Brannan to be 100 percent disabled due to PTSD, a severe diagnosis that means one’s symptoms show “total occupation and social impairment.”

In 1996, his VA psychiatrist would further diagnosis him as bipolar. Brannan was hospitalized at least twice for mental illness.

By the time he was pulled over by Deputy Dinkheller, Brannan was living in a structure he had built in the woods near Dublin, Georgia. It had no running water or electricity. A doctor who examined Brannan would later write that the veteran “was living a marginal, fearful life, living in a primitive homemade shack reminiscent of a bunker in Vietnam.”

An officer in Laurens County who helped search for Brannan after the shooting described it as having a “watch tower” and tunnels dug beneath it.

Numerous veterans spoke out in an attempt to stay his execution.

“What does putting a man like Andrew Brannan to death say to my generation of veterans? To me, it says that this country can exploit our youth to its gain and then, when it comes time, this country, and the State of Georgia, will discard you like yesterday’s forgotten garbage,” Sion New, a veteran of the Iraq and the Afghanistan wars and law student at Emory University, wrote to the state’s Board of Pardons and Paroles. In Georgia, the decision to grant clemency is not made by the governor but by the Board, whose members are appointed by the governor.

Brannan’s execution is not the first of its kind. Manuel Babbitt became a rallying point for many activists before he was executed in 1999 in California. During the Vietnam war he suffered a head injury and once woke up amongst dead bodies being carried on a truck after  falling unconscious. His severe beating of an elderly woman led to her death. Before his execution, he was awarded the Purple Heart in prison.

There are many more examples of prisoners with documented mental illness on death row — and several who have been executed. The Death Penalty Information Center lists six in the past five years alone. Last month, the execution of Scott Panetti, a severe paranoid schizophrenic, was halted at the last minute in Texas.

Veterans, however, have been able to avoid death sentences in more recent years with successful defenses emphasizing their PTSD diagnoses. In 2011, Iraq War veteran Joshua Stepp was found guilty of sexually assaulting and killing of his 10-month-old stepdaughter in North Carolina. Stepp, however, was spared a death sentence after his lawyers presented a strong defense based around his PTSD diagnosis.

A Korean War veteran faced the death penalty for killing his ex-girlfriend and her new boyfriend in 1986. The US Supreme Court threw out the veteran’s death sentence in 2009, saying that the “intense stress and mental and emotional toll” of combat experience needed to be considered by a jury. “Our nation has a long tradition of according leniency to veterans in recognition of their service, especially for those who fought on the front lines,” the court wrote.

According to 11Alive News of Atlanta, Brannan’s lawyer called him hours before his execution and told him that his case had raised public awareness about the impact of PTSD on veterans. Brannan responded, “I am proud to have been able to walk point for my comrades, and pray that the same thing does not happen to any of them.”

Brannan became the 55th prisoner executed in Georgia since 1976, when capital punishment was reinstated in the US. In his final words, he expressed condolences to the Dinkheller family and asked for a prayer.

Taylor Barnes is a freelance journalist who works in Rio de Janeiro and Atlanta. Her work has appeared in The New York Times, The Christian Science Monitor and The Islamic Monthly.