It’s not often that the unelected leader of a country which publicly flogs dissidents and beheads people for sorcery wins such glowing praise from American officials and the Western press. King Abdullah’s regime engaged in wanton human rights abuses, instrumentalized religious chauvinism, and played a hugely counterrevolutionary role in regional politics. 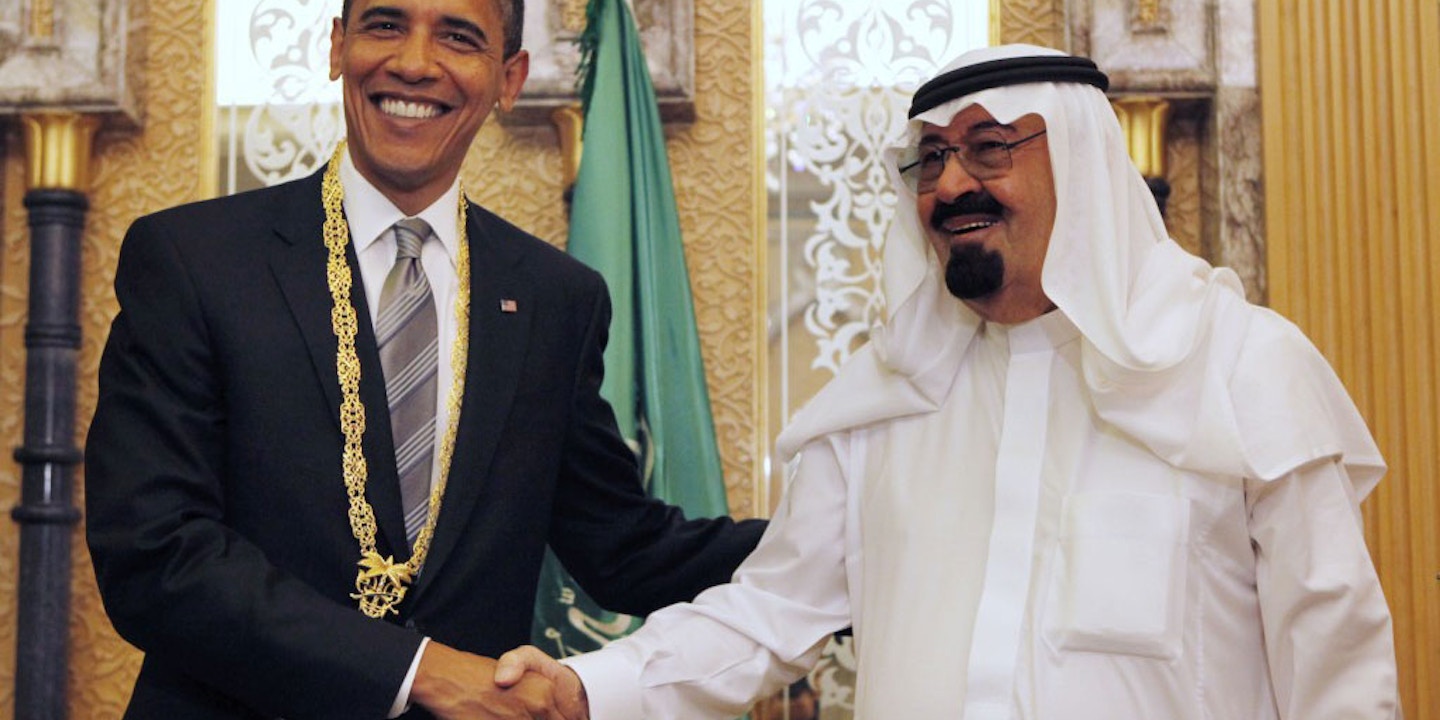 After nearly 20 years as de facto ruler of the Kingdom of Saudi Arabia, King Abdullah ibn-Abdulaziz al-Saud died last night at the age of 90. Abdullah, who took power after his predecessor King Fahd suffered a stroke in 1995, ruled as absolute monarch of a country which protected American interests but also sowed strife and extremism throughout the Middle East and the world.

In a statement last night Senator John McCain eulogized Abdullah as “a vocal advocate for peace, speaking out against violence in the Middle East”. John Kerry described the late monarch as “a brave partner in fighting violent extremism” and “a proponent of peace”. Not to be outdone, Vice President Joe Biden released a statement mourning Abdullah and announced that he would be personally leading a presidential delegation to offer condolences on his passing.

It’s not often that the unelected leader of a country which publicly flogs dissidents and beheads people for sorcery wins such glowing praise from American officials. Even more perplexing, perhaps, have been the fawning obituaries in the mainstream press which have faithfully echoed this characterization of Abdullah as a benign and well-intentioned man of peace.

Tiptoeing around his brutal dictatorship, The Washington Post characterized Abdullah as a “wily king” while The New York Times inexplicably referred to him as “a force of moderation”, while also suggesting that evidence of his moderation included having had: “hundreds of militants arrested and some beheaded”. (emphasis added)

While granting that Abdullah might be considered a relative moderate within the brazenly anachronistic House of Saud, the fact remains that he presided for two decades over a regime which engaged in wanton human rights abuses, instrumentalized religious chauvinism, and played a hugely counterrevolutionary role in regional politics.

Above all, he was not a leader who shied away from both calling for and engineering more conflict in the Middle East.

In contrast to Senator McCain’s description of Abdullah as “a vocal advocate of peace”, a State Department diplomatic cable released by Wikileaks revealed him in fact directly advocating for the United States to start more wars in the region.

In a quote recorded in a 2008 diplomatic cable, Abdullah exhorted American officials to “cut the head off the snake” by launching fresh military action against Iran. Notably, this war advocacy came in the midst of the still-ongoing bloodshed of the Iraq War, which had apparently left him unfazed about the prospect of a further escalation in regional warfare.

Abdullah’s government also waged hugely destructive proxy conflicts wherever direct American intervention on its behalf was not forthcoming. Indeed, in the case of almost every Arab Spring uprising, Saudi Arabia attempted to intervene forcefully in order to either shore up existing regimes or shape revolutions to conform with their own interests.

In Bahrain, Saudi forces intervened to crush a popular uprising which had threatened the rule of the ruling al-Khalifa monarchy, while in Syria Saudi-backed factions have helped turn what was once a popular democratic uprising into a bloody, intractable proxy war between regional rivals which is now a main driver of extremism in the Middle East.

In the midst of the 2011 revolution in Egypt, when seemingly the entire world was rallying in support of the protestors in Tahrir Square, King Abdullah stood resolutely and unapologetically on the side of Hosni Mubarak’s regime. When it seemed like Mubarak was wavering in the face of massive popular protests, the king offered to step in with economic aid for his government and demanded that President Obama ensure he not be “cast aside”.

A few years later when the pendulum swung back towards dictatorship after General Abdelfattah al Sisi’s bloody 2013 coup, Abdullah and his fellow monarchs were there to lavish much needed financial assistance upon the new regime. This support came with the endorsement of Sisi’s unrelentingly brutal crackdown on Egypt’s former revolutionaries.

With increasingly disastrous consequences, Abdullah’s government also employed sectarianism as a force to help divide-and-conquer regional populations and insulate his own government from the threat of uprising. It also cynically utilized its official religious authorities to try and equate political dissent with sinfulness.

This ostentatiously reckless behavior nevertheless seemed to win Abdullah’s regime the tacit approval of the American government, which steadfastly continued to treat him as a partner in fighting terrorism and maintaining regional stability.

Despite recent tensions over American policy towards Iran and Syria, Saudi under King Abdullah played a vital role in U.S. counterterrorism operations. The country quietly hosts a CIA drone base used for conducting strikes into Yemen, including the strike believed to have killed American-born preacher Anwar al-Awlaki. More controversially, Abdullah’s government is also believed to have provided extensive logistical support for American military operations during the invasion of Iraq; an uncomfortable fact which the kingdom has understandably tried to keep quiet with its own population.

Perhaps most importantly however, King Abdullah upheld the economic cornerstones of America’s long and fateful alliance with Saudi Arabia: arms purchases and the maintenance of a reliable flow of oil from the country to global markets. The one Saudi king who in past failed to hold up part of this agreement met with an untimely end, and was seemingly on less positive terms with American government officials.

Given the foundations upon which American-Saudi ties rest, it’s unlikely that the relationship will be drastically altered by the passing of King Abdullah and the succession of his brother Prince Salman. Regardless of how venal, reckless, or brutal his government may choose to be, as long as it protects American interests in the Middle East it will inevitably be showered with plaudits and support, just as its predecessor was.