The move comes on the eve of a hearing challenging the U.S. Government’s no-fly list. In late December 2010, 18-year-old Somali-American Gulet Mohamed was detained in Kuwait without charges and tortured, almost certainly at the behest of U.S. officials. Through a cellphone smuggled into the detention camp by another inmate, Gulet was able to call me and New York Times reporter Mark Mazzetti and recount what happened; that morning, we both published articles reporting on the detention, and (with Gulet’s consent) I published the recording of the 50-minute call I had with him, showing him in extreme distress as he described his ordeal.

After Kuwaiti officials concluded they had no cause to detain him, the teenager was told that he would be deported back to the U.S. as soon as his family presented a plane ticket. Once they did that, he was taken to the airport, only to be told by United Airlines that he was barred from boarding the plane because he had recently been placed by the U.S. Government (in secret, with no hearing or explanation) on the no-fly list. In other words – as has happened many times before to American Muslims – Gulet’s own government secretly exiled him with no due process by placing him on a no-fly list while he was traveling overseas. Only after a stand-off with the Kuwaitis did the U.S. Government issue a one-time waiver to allow him to fly back to the U.S. He remains on the no-fly list. Once back in the U.S., Gulet (pictured, right) – who, to this day, has never been charged with a crime – sued the U.S. Government for violation of his constitutional rights, a case that challenges not just Gulet’s specific treatment but the no-fly process itself. The federal judge presiding over the lawsuit, Bush-43-appointee Anthony Trenga of the Eastern District of Virginia, issued a series of rulings demonstrating clear skepticism about the DOJ’s arguments in defense of the no-fly system. As my Intercept colleague Cora Currier reported in October, Judge Trenga rejected the DOJ’s argument that what was done to Gulet was a “state secret” and therefore could not be adjudicated by any court, thus ensuring the case would be fully heard.

As Gulet’s lawyer, Gadeir Abbas, told The Intercept last night, Judge Trenga has repeatedly signaled serious concern about the no-fly system, including asking why less restrictive means (e.g., subjecting suspects to greater airport security scrutiny, putting air marshals on their planes) couldn’t be used. The judge has also written eloquently about the substantial degradation and harm that comes to someone barred by their own government from boarding an airplane, with no charges to contest and no real process to challenge the prohibition.

One of the most important hearings yet in this case – the argument on the DOJ’s motion for summary judgment – was long-scheduled to take place this morning in Judge Trenga’s Virginia courtroom. Yesterday, the FBI suddenly announced – via Twitter, a specially made YouTube video, and a dramatic posting on its site – that Gulet’s older brother, Liban, has now been named to the agency’s Most Wanted List as its “New Most Wanted Terrorist.” The agency revealed that Liban is now charged with material support for terrorism for allegedly recruiting on behalf of the Somalian group Al Shabaab, and is offering $50,000 “for information leading to his arrest and conviction.”

Liban, who was working as a taxi cab driver when Gulet was detained and tortured, was one of his brother’s most vocal and eloquent advocates. I met with him several times in Washington, DC, and listened as he recounted with great sadness the psychological after-effects on his younger brother from his ordeal in Kuwait, as well as Liban’s own contained anger at being constantly surveilled and placed on the no-fly list despite never being charged with any crime.

In April 2012, I wrote about one of my meetings with Liban, describing the indignities he (and so many other young U.S. Muslims) experienced after going to the airport to try to visit Somalia for the first time, only to be told at the airport that he was barred by his own government from flying (at the time I wrote that article, he was unwilling to be publicly identified in connection with that event due to his fear that government harassment would intensify). The FBI claims he left the U.S. to join Al Shabab in Somalia a couple of months later: “Traveling with his U.S. passport, Mohamed is thought to have left the United States on or about July 5, 2012.”

I obviously have no idea whether Liban has done anything the FBI accuses him of doing: the indictment remains sealed. But independent of that issue, there is a serious question about why the FBI waited until the day before a key hearing in Gulet’s no-fly case to so melodramatically brand his brother as one of the world’s “most wanted terrorists,” particularly since they have had the arrest warrant for almost a full year. 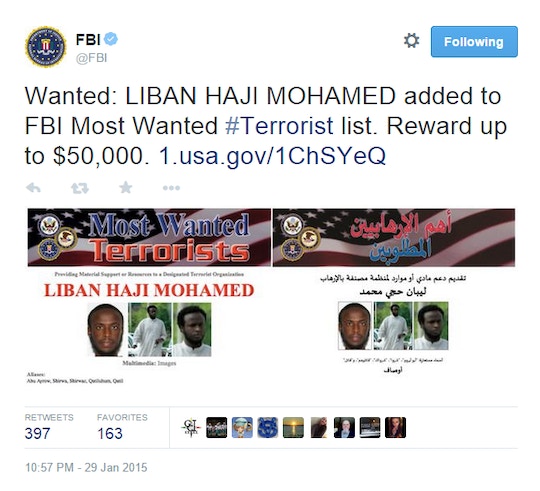 What is beyond doubt is that the FBI has previously used dubious criminal charges, specifically terrorism accusations, to demonize and punish those who had the temerity to challenge the legality of the U.S. Government’s terrorism policies. One of the most egregious such instances involved Yonas Fikre, in a case very similar to Gulet’s.

In 2011, Fikre, an Eritrean-American businessman, was detained without charges and repeatedly tortured by the United Arab Emirates, again almost certainly at the behest of the U.S. Government (as was true in Gulet’s case, the U.S. Government, rather than seek to help him while being tortured by a foreign government, sent FBI agents to harshly interrogate him in captivity). Exactly as happened to Gulet (and so many others), Fikre was also placed on the no-fly list while overseas, exiling him from his own country and preventing his return. Unable to travel to his own country, he was forced to go to Sweden where he sought asylum. His detention and torture by the UAE, a close U.S. ally, occurred after he repeatedly refused to act as an FBI informant against American Muslims in the Portland area where he lived. While in Sweden in April, 2012, Fikre (pictured, right) went public with his allegations about the torture he endured and the U.S. role in it. He then sued the FBI for complicity in his torture, as well as violation of his constitutional rights for placing him with no due process on the no-fly list, effectively exiling him.

Literally two weeks after Fikre went public with his allegations, the FBI suddenly announced that it was criminally charging him, along with his brother (a taxi driver), with a felony count of “structuring”: where someone tries to avoid banking reporting obligations by deliberately depositing amounts less than the $10,000 reporting threshold. No terrorism charges were included, and his lawyer at the time pointed out the obvious: “I think it’s retaliation and retribution.”

As the advocacy group Identity Project noted, Fikre was charged “with the pettiest of purely procedural violations of Federal law,” and thus “it’s hard to avoid the conclusion that Fikre’s real ‘crime’ is exposing US torture and exile of its own citizens, and embarrassing the US by seeking asylum abroad.” Last October, the FBI unceremoniously dropped all charges against Fikre, while his brother pled guilty to one count of failing to file a tax return.

Now, on the eve of a crucial court hearing that threatens the viability of the no-fly list, the FBI suddenly announces that the plaintiff’s brother is one of the World’s Most Wanted Terrorists. The judge in this case now knows that the plaintiff’s brother has been so branded by the U.S. Government, significantly increasing the political pressure on the judge not to rule in Gulet’s favor. To say that this accusation against Liban Mohamed, and the FBI’s motive in trumpeting it, deserves great skepticism is to greatly understate the case.