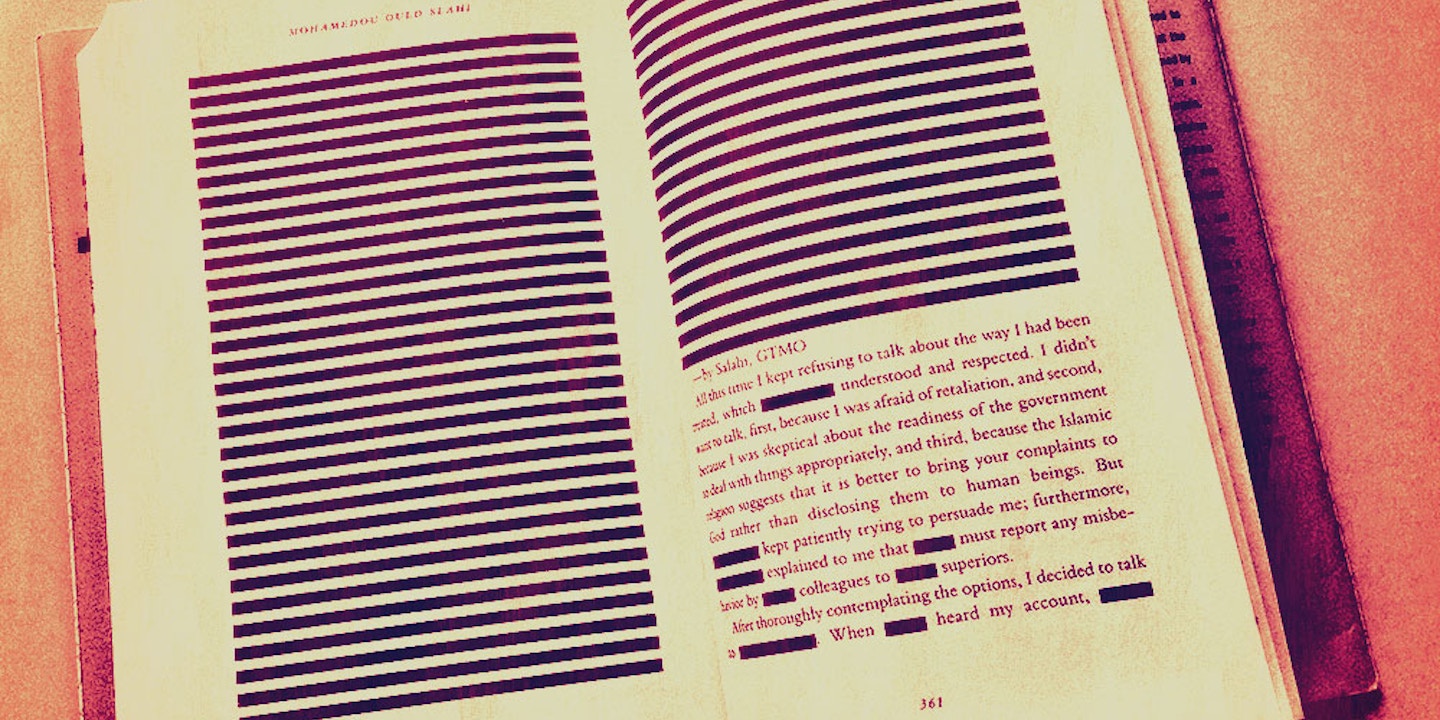 The first word of Guantánamo Diary is a black bar.

The book, in which Guantanamo detainee Mohamedou Ould Slahi tells of his odyssey through overseas prisons and his torture and abuse by the US and its counterterrorism allies, is pockmarked with redactions left by military censors.

The diary was finally published last week, more than nine years after Slahi wrote it, and it jumped onto bestseller lists. But the details of how his lawyers fought for its release are still under seal – highlighting the secrecy that still surrounds everything to do with the U.S. military prison and the 122 men who remain there.

“The starting point is that everything that Mohamedou says, like anything that any Guantanamo detainee says, is considered classified and has to be cleared by the government,” said Hina Shamsi, the director of the National Security Project at the American Civil Liberties Union, who was involved in the negotiations for the manuscript’s release.

Slahi, a 44-year-old Mauritanian educated in Germany, was rendered by the CIA to prison in Jordan in late 2001, then held by the U.S. in Afghanistan and Guantanamo. The government claimed that Slahi had been an al Qaeda recruiter. He admits that he went to Afghanistan in 1990 to fight against the communist government; his brother-in-law was an adviser to Osama Bin Laden; and he’d met one of the 9/11 plotters in Germany. But Slahi maintains that he’d had nothing to do with al Qaeda since 1992, and the U.S. has never charged him with a crime.

Slahi began to write his memoir in the summer of 2005, soon after he first met with attorneys. But, consistent with its policy of censoring communications from detainees, the government refused to approve it for release: Instead, the manuscript sat in a facility near Washington D.C., off-limits to anyone without the right security clearance. His attorneys, Shamsi said, fought to get it declassified, but that litigation remains under seal. Once they obtained an unclassified version, it could still only be read by Slahi’s legal team. It took further negotiations to get the government to approve it for public release.

By the time the editor Larry Siems got hold of the manuscript in 2012, volumes of information about Slahi’s case had come into the public record. In 2006, the government released transcripts from hearings evaluating prisoners’ detention status, Slahi’s among them. Reports from the Justice Department and the Senate Armed Services Committee detailed his interrogation. Documents from a federal court challenge revealed aspects of the government’s intelligence against him.

Siems was able to cross-reference these materials to establish the chronology of Slahi’s narrative, in which all dates have been redacted.

“He dropped me on the dirty floor. The room was dark as ebony. [Redacted] started playing a track very loudly—I mean very loudly. The song was, “Let the bodies hit the floor.” I might never forget that song. At the same time, [redacted] turned on some colored blinkers that hurt the eyes. “If you fucking fall asleep, I’m gonna hurt you, he said.”

The Senate report recounts a July 8, 2003 session where Slahi was “exposed to variable lighting patterns and rock music, to the tune of Drowning Pool’s ‘Let the Bodies Hit [the] Floor.”

“He’s a remarkably accurate historian of his own experience. His account just lines up with publicly available information,” said Siems.

Some of Slahi’s lawyers have security clearance, and could read the full manuscript, but they are barred from talking about what might be behind the redactions. “These were not conversations that I could have with them,” said Siems.

Siems was never in contact with Slahi as he prepared Guantánamo Diary. Journalists have not been allowed to speak directly to current detainees (although in the book, Slahi claims that his interrogators asked at one point if he would talk to “a moderate journalist from the Wall Street Journal” to “refute the wrong things we’re suspected of”). Military commissions trials at Guantanamo, though open to the media, must be watched from behind soundproof glass, with the audio on a 40-second time delay to allow censors to bleep out any classified information. In 2012, detainee lawyers, the ACLU, and a host of media organizations challenged that “presumptive classification,” but a judge ruled against them.

“That’s the absurdity of this classification regime,” said Shamsi. “There is so much public information about what happened to the prisoners at Guantanamo, yet the government goes out of its way to prevent us from hearing directly from them.”

For Larry Siems, censorship is at the core of Slahi’s story, and while the redactions sometimes impede his narrative, they serve a literary function as well.

The redactions often appear to cover up details of the accusations leveled against Slahi, and the questions asked of him during interrogations. That gives the impression that the book elides the murky parts of his case, Siems says, when in fact, “he’s really open and transparent about the charges against him. It looks like information is being withheld but it’s not him that’s doing it.”

The identities of guards and interrogators are also redacted. (It is fairly obvious that every female pronoun was blacked out, though an occasional “she” or “her” seems to have slipped through. A few interrogators’ nicknames also appear to have been inconsistently redacted.) That anonymity, Siems notes, is ironic given that Slahi explains numerous times that he considered each person he encountered throughout his ordeal as individuals — from the guard who tells Slahi proudly, “‘my wife calls me asshole,’” to a lapsed Catholic guard with whom he debates the existence of God. Of a notorious interrogator, Slahi wonders, “how could a man as smart as he was possibly accept such a degrading job … maybe he had few choices, because many people in the Army come from poor families.” Another interrogator, however, is “more of a lover than a hater.”

Near the end of the book, Slahi describes a woman with whom he exchanged poems: “I am terrible when it comes to surrealism. I hardly understood any of her poems. One of my poems went…” The next page and a half are blacked out.

Slahi is one of Guantanamo’s so-called “forever prisoners,” who have been neither charged nor cleared for release. In 2010, a federal appeals court vacated a judge’s decision that he must be let go, and sent it back to the lower court for further proceedings, which are still pending. He is also eligible for a review board hearing to evaluate his status at Guantanamo, which the government could schedule at any time.

Nearly a decade has now passed since Slahi wrote, “As I am writing this, the United States and its people are still facing the dilemma of the Cuban detainees…under these circumstances, Americans need and have a right to know what the hell is going on.”