Combat is encroaching on Sharif Mobley, jailed for five years and reportedly interrogated by U.S. agents. 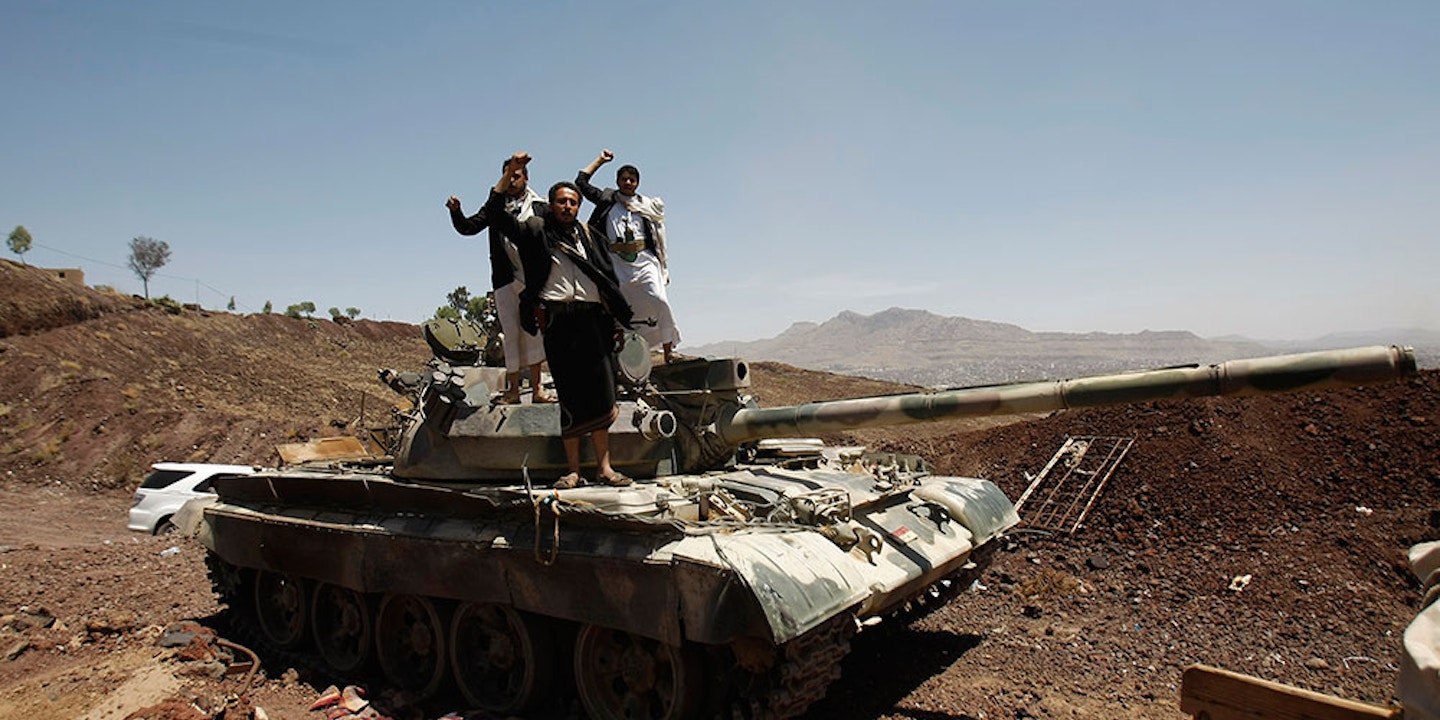 As more and more of Yemen is taken over by the country’s Houthi Shiite minority, combat has apparently begun to encroach on Sharif Mobley, an American being held under mysterious circumstances in Yemen.

Mobley can hear fighting between Houthi militias and Hadi’s forces from within the facility in which he is detained, according to his partner, Nzinga Islam, who lives in New Jersey. His psychological condition and his treatment by those holding him have both declined since the start of the year, she said. Mobley, who has been held in Yemen since 2010, fears he might be killed as the fighting intensifies.

It is not known where Mobley is being held. After abandoning the capital, Sanaa, the retreating regime of Abd-Rabbu Mansour Hadi has regrouped in the south of the country, setting up a new capital in Aden. The Houthis hail from Yemen’s remote northern highlands.

Born in New Jersey, Mobley and his four older siblings were raised by parents who were members of the Nation of Islam. The family lived in the small town of Buena, about an hour east of Philadelphia. As his devotion to his Muslim faith grew, Mobley met Islam in 2005 and married her three months later. Their first child, a daughter, was born soon after. The couple moved to Delaware in 2007 and began contemplating a move to the Middle East to strengthen their faith and learn Arabic. After striking up a friendship with a family from Yemen at a mosque they attended, Mobley and his wife decided to move with their newborn daughter to the country in 2008.

U.S. officials alleged at the time that Mobley appeared to be taking steps toward terrorism after being in contact with Anwar al-Awlaki, the former Al-Qaeda recruiter born in America and killed in 2011 by a U.S. drone strike. The officials alleged that Mobley was helping Al-Qaeda by moving members of the group through the country. But according to a Washington Post interview in 2010, Islam said that Mobley, who emailed the then-popular preacher after hearing his religious teachings on CDs, only talked to Awlaki about what to do with her after she became pregnant again and needed surgery.

After becoming fearful about how dangerous conditions were getting in Yemen, including feeling that they were under surveillance, Islam claimed that she and Mobley had planned to return to America as soon as possible. Islam would turn out to be the only one who made it back home to New Jersey, as Mobley and his lawyers said that he was detained by a group of men in the middle of the night and shot in the leg on January 26, 2010.

It’s a startling tale that has received its share of coverage, but is still unknown to most Americans.

Now, with Yemen in the midst of a civil war, Nzinga Mobley spoke with The Intercept about the increasingly precarious position her husband is in. She said the conditions of Mobley’s imprisonment are deteriorating.

Islam said the battle for control of Yemen has added to her husband’s stress.

“Mostly what I hear from him, on a psychological level, is that he hears the fighting going on outside between the Houthi group and the government soldiers,” she said. “He hears the fighting, it’s very close by. He has a feeling that they took the prison or the military base which he’s on.  He fears for his life — he doesn’t know what they are capable of.  It has gotten worse for him psychologically because not only does he not know what’s going on with his own case, but now he even fears, day to day, for his life.”

Mobley’s lawyers from the international human rights NGO group Reprieve claimed that after his arrest, he was shackled to his bed for 24 hours a day and beaten regularly. They also said he was interrogated by two U.S. agents who identified themselves as “Khan from DOD (Department of Defense) and Matt from FBI.” His account was supported by a FOIA request made by Reprieve lawyer Cori Crider, which revealed an FBI document describing a conversation with Islam during the first few days of his incarceration.

The FBI and the Department of Defense have yet to respond to The Intercept’s request for comment on the incident.

According to his lawyers, Mobley was taken to the hospital for treatment to his damaged leg, where he endured more questioning from the same U.S. officials on his reasons for moving to Yemen. The lawyers also described an account in which the same officials threatened Mobley on the condition that, if he failed to answer their questions about Awlaki, his wife and children would suffer and he would never seen them again.

Then, on March 7, 2010, Yemeni officials claimed that Mobley shot and killed a guard in a failed escape attempt from the hospital. Mobley’s lawyer said they’ve never been told the charges he faces from that incident, and they haven’t seen him since February 2014.  In addition, his lawyers said that their client has been sprayed with mace whenever he has requested to speak to the  U.S. Embassy, which no longer exists after officially closing a few weeks ago. Islam had been very critical of the embassy in failing to facilitate her attempts to reconnect with her husband.

“I remember there was a time when I was in Yemen and they were suggesting Americans go home,” she told The Intercept. “They pick up the phone and called my family back here in America to reach out to me and tell me if I got home. So I know they are capable of doing so. But no one has ever called me or emailed me or reached out to any of the family about the current situation, given us some type of reassurance or anything. Anytime I ever had contact with the embassy or State Department was through my initiation, me asking them, ‘What is your plan now for Sharif, now that the situation has completely turned around and there is no government?’ And I get either no response or a weak response when I ask about the evacuation. ‘Oh, there is no evacuation.’”

Crider echoed Islam’s sentiments about U.S. officials not showing the level of concern or urgency that they would expect from those tasked with making sure the status of Americans is constantly communicated to their families and close ones.

“Poor Nzinga has been chasing them again and again, just as I have,” Crider said. “And it’s not just that they don’t initiate contact. They have affirmatively withheld information that is critical to their own citizen trying to get a fair trial. Even if the embassy was doing everything it could — as a person who has sat through several hearings in that criminal court process, it makes some of the Guantánamo things that some of my clients go through look like a model of due process. So, no, they don’t call. It’s kind of a ‘We’ll-call-you’ kind of a thing.”

Crider emphatically believes that the U.S. officials are fully cognizant of Mobley’s location and condition.

“They have been to see him,” she said. “They know where he is. And when she asks where is my husband, they just say, ‘We can’t tell you for security reasons.’ The idea that the government of the United States, a massive funder of the Yemeni government, is just going to permit that state to disappear one of its own citizens kind of tells you what you need to know about where poor Sharif is on the pecking order.”

The lack of urgency to help Mobley from American officials has prompted Islam to believe that her husband would receive more attention and help if he were white.

“It’s sad and it’s unfortunate, but I’m feeling that if he was a white American, more effort would have been made to get him out of the situation,” said Islam, who has made similar comments to NBC News. “Now, I believe it’s very difficult to remove him from the situation. But before it had gotten this bad, I believe that if he was a white American, they would have put forth enough effort. It wouldn’t have even gotten this far, it would have been five years, he wouldn’t have to experience the civil war that’s happening now. I still have that feeling.”

Mobley, now 31, had advised his wife to take their children out of Yemen and return to America.

“It’s not a day that goes by that they don’t ask about their father,” said Islam, who has two sons and a daughter with Mobley. “I always relate Sharif in our daily activities. I definitely keep his memory and his presence alive in the house by telling them stories about what their father used to like, what type of cartoons. For example, we’re going to Chuck E. Cheese and Sharif was always scared of the big mouse character, and that’s something I would tell them about. Every day my daughter or my son — even the younger son we have, who has never seen his father — I show him pictures and he points to his daddy. So they are very aware of their father and his circumstances.”