Email obtained by The Intercept shows bureau discussion of Mall of America protest and an informant who relayed plans. 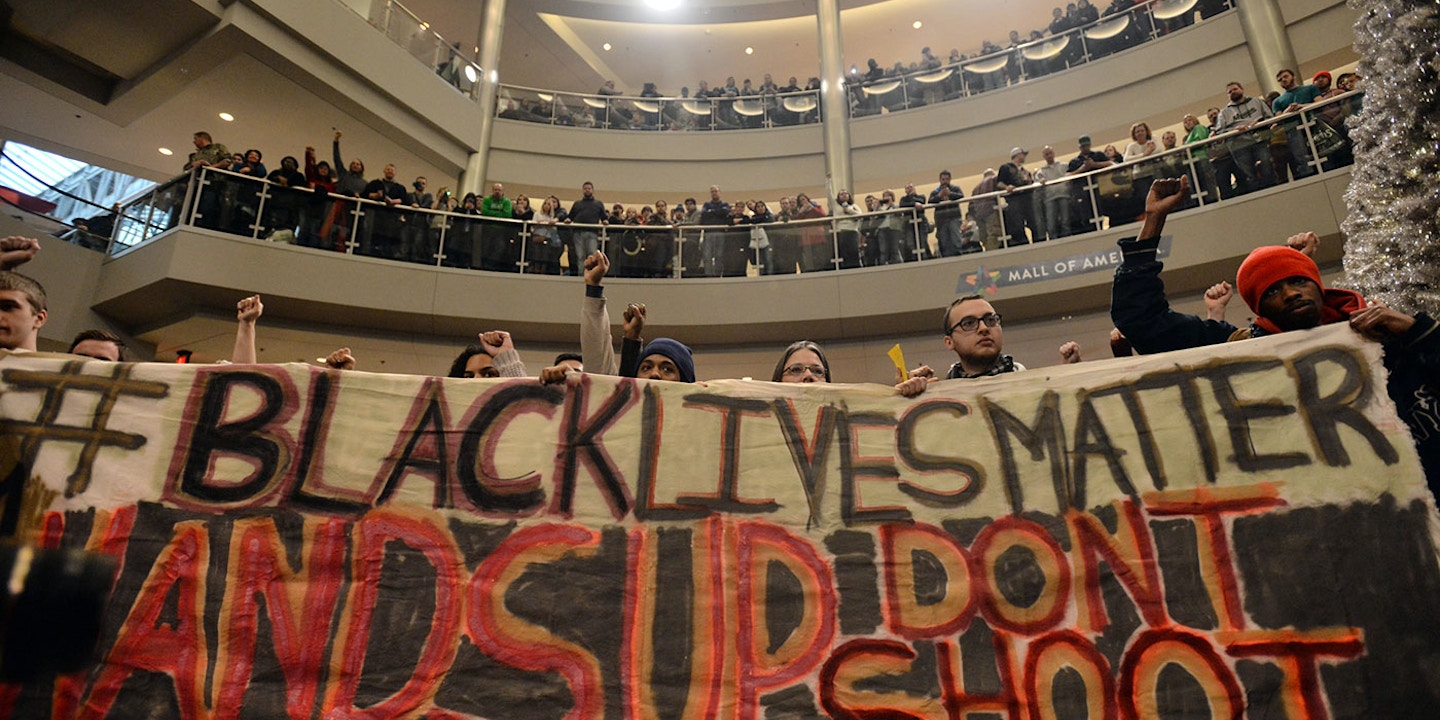 Members of an FBI Joint Terrorism Task Force tracked the time and location of a Black Lives Matter protest last December at the Mall of America in Bloomington, Minnesota, email obtained by The Intercept shows.

The email from David S. Langfellow, a St. Paul police officer and member of an FBI Joint Terrorism Task Force, informs a fellow task force member from the Bloomington police that “CHS just confirmed the MOA protest I was taking to you about today, for the 20th of DEC @ 1400 hours.” CHS is a law enforcement acronym for “confidential human source.”

Activists had planned the protest at the mall to call attention to police brutality against African Americans. “Our system disproportionately targets, profiles and kills black men and women, that’s what we are here talking about,” organizer Michael McDowell told a reporter at the time. “We wanted to show people who have the everyday luxury of just living their lives that they need to be aware of this, too.”

According to an FBI spokesman, Langfellow’s Confidential Human Source was “a tipster with whom Mr. Langfellow is familiar,” who contacted him “after the tipster had discovered some information while on Facebook” that “some individuals may engage in vandalism” at the Mall of America protest. Upon receiving the email, Bloomington police officer and task-force member Benjamin Mansur forwarded it to Bloomington’s then-Deputy Police Chief Rick Hart, adding “Looks like it’s going to be the 20th…” It was then forwarded to all Bloomington police command staff. There is no mention of potential vandalism anywhere in the email chain, and no vandalism occurred at the Mall of America protest.

The FBI spokesman emphasized that “As for any ‘FBI interest’ in the Black Lives Matter campaign, the FBI had (has) none,” and “makes certain its operational mandates do not interfere with activities protected by the First Amendment to the U.S. Constitution.” The spokesman acknowledged that vandalism does not fall under the Memorandum of Understanding establishing the parameters under which local police officers are detailed to Joint Terrorism Task Forces and the task force mission of “prevention, preemption, deference and investigation of terrorist acts.” Asked why VanNest, the Joint Terrorism Task Force supervisor, was CC’d on Langfellow’s email, the spokesman responded “I don’t know” but speculated it was “as a matter of courtesy.”

“Clearly it’s inappropriate to be using the Joint Terrorist Task Force to monitor activists [and] the use of a CHS seems extremely inappropriate,” said Michael German, a fellow at New York University’s Brennan Center for Justice and former special agent with the FBI. “The fact that they’re spending resources in this manner reflects poor leadership and is something that they should really take a hard look at.”

The FBI has been criticized in the recent past for its actions regarding domestic advocacy groups. A 2010 report by the Department of Justice Inspector General found the FBI opened investigations connected to organizations such as Greenpeace and the Catholic Worker movement that classified possible “trespassing or vandalism” as domestic terrorism cases. The report also found the FBI’s National Press Office “made false and misleading statements” when questioned by the media about documents obtained by public records requests. Langfellow himself, while working as a member of a Joint Terrorism Task Force, was in charge of a 2008 raid on the home of St. Paul activists ahead of that year’s Republican Party Convention that led to a lawsuit that the city settled for $50,000.

Further in the past, the FBI engaged in well-known, ugly mistreatment of African American activists in particular. “There’s a long history in the FBI and law enforcement generally of law enforcement agents seeing challenges to the status quo as threats to security,” said German. Documents stolen from an FBI field office in 1971 showed the Bureau was keeping literally every black student at Swarthmore College in Pennsylvania under surveillance.

After the December 20 Mall of America protest, the city of Bloomington charged 11 protestors with six separate criminal misdemeanors, including unlawful assembly, and is seeking thousands of dollars in restitution. Jordan Kushner, one of the activist’s defense attorneys, says the city has alleged $25,000 in police costs and that he also received a letter from the Mall of America seeking $40,000 for mall security costs, raising overall restitution to $65,000.

As reported by the Star Tribune, emails released earlier this week reveal apparent coordination between Sandra Johnson, the Bloomington city attorney, and Kathleen Allen, the Mall of America’s corporate counsel. “It’s the prosecution’s job to be the enforcer and MOA needs to continue to put on a positive, safe face,” Johnson wrote to Allen two days after the protest, encouraging the mall company to wait for a criminal charge from the city before pursuing its own lawsuit. “Agree — we would defer any civil action depending on how the criminal charges play out,” Allen wrote back.

“That’s pretty unprecedented to use a criminal proceeding for a corporation to collect their costs, costs for policing and protest,” said Kushner. “It’s not like people stole from them or damaged belongings.”

Nekima Levy-Pounds, a professor of law at the University of St. Thomas in St. Paul and one of the Black Lives Matter defendants, said she found parallels between the conduct of law enforcement in Minnesota and the tactics used against civil rights protesters a generation ago. “I think it’s relevant,” she said, adding that in both instances, officers attempted to “curb nonviolent peaceful protests and to violate people’s rights to free speech.”