Confirms that the U.S. works with other countries to jointly interrogate suspected terrorists — rare remarks on a sensitive topic. 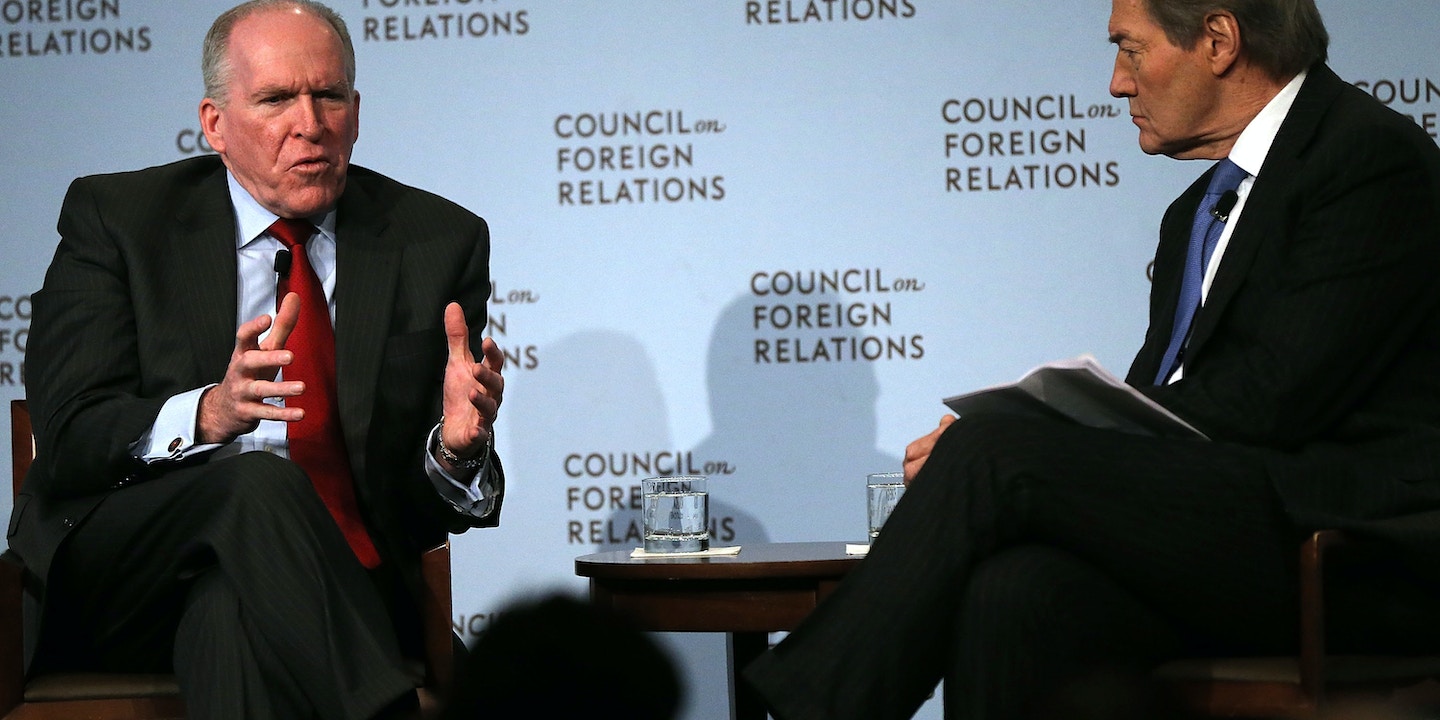 In rare remarks about a sensitive issue, the director of the CIA confirmed today that the U.S. government works with foreign intelligence agencies to capture and jointly interrogate suspected terrorists.

“There are places throughout the world where CIA has worked with other intelligence services and has been able to bring people into custody and engage in the debriefings of these individuals … through our liaison partners, and sometimes there are joint debriefings that take place as well,” said John Brennan, the CIA director, speaking at the Council on Foreign Relations in New York.

Brennan’s remarks confirm what journalists have long reported: that the Obama administration sometimes helps other countries do the dirty work of snatching and interrogating terror suspects — keeping the U.S. at arm’s length from operations that are ethically and legally dubious.

During a question-and-answer session, it was Fox News’ Megyn Kelley who questioned Brennan about “capturing terrorists.”

“Are we still doing that?” she asked. “And where are we keeping them and how are we interrogating them?”

Brennan responded that the U.S. is able to work with “partners” to “identify individuals and to have them captured … although there are not a lot of public pieces on Fox News about somebody that might be picked up in different parts of the world.”

In one of his first moves after taking office in 2009, President Obama famously shut down the CIA’s Black Site program, which was begun under President George W. Bush. After 9/11, more than 100 alleged terrorists were captured and sent to secret CIA-run detention centers where they were tortured and interrogated by agency operatives.

Although the Black Sites have been shut down and no new prisoners sent to Guantánamo Bay, detentions of terrorists — and attacks against them — remain a murky issue. The administration has brought several alleged terrorists to face trial in the United States, and it has killed thousands more in drone strikes, along with hundreds of civilians. Obama has also maintained the authority (as President Bill Clinton did in the 1990s) to render people to third countries, where laws are looser.

The Intercept’s Jeremy Scahill and others have detailed cases during the Obama administration in which terror suspects were held in foreign custody at the behest of the U.S. In 2011, Scahill reported for The Nation on a secret prison in Somalia’s capital, Mogadishu. Though officially run by the Somali government, Scahill wrote, “US intelligence personnel pay the salaries of intelligence agents and also directly interrogate prisoners” at the facility.

Brennan’s comments today are a rare confirmation that the CIA remains actively involved in the arrest and interrogation of terrorist suspects overseas. He also discussed a restructuring of the CIA that was announced this week, which will blur the traditional distinction between intelligence analysts and on-the-ground operatives. The overhaul brings them together along the model of the CIA’s Counterterrorism Center, which has spearheaded the agency’s hunting and killing of terror suspects since 9/11. Brennan said  it had become common in the “war zone” to have “analysts and operators who are working cheek to jowl,” and that the agency needed “to migrate those efforts to other areas.”

While there have been periodic reports that the Obama administration wants to shift the primary responsibility for drone strikes from the CIA to the military, where there would ostensibly be more transparency, Brennan said the CIA will still maintain “paramilitary skills and capabilities.”

In his wide-ranging remarks, Brennan also discussed cyberthreats, saying government networks are under “constant assault” and “private companies are spending enormous sums of money to defend against hacking attempts, denial of service attacks, and other efforts to disrupt their networks.” He was silent, naturally, on the CIA’s own attempts to get inside private tech companies’ operations, like its multi-year effort to crack the security of Apple’s iPhones and iPads, revealed by The Intercept this week.