What’s Scarier: Terrorism, or Governments Blocking Websites in its Name?

More damage has been inflicted historically by censorship than by the “terrorism” used to justify it.

The French Interior Ministry on Monday ordered that five websites be blocked on the grounds that they promote or advocate terrorism. “I do not want to see sites that could lead people to take up arms on the Internet,” proclaimed Interior Minister Bernard Cazeneuve. 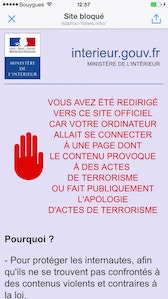 When the block functions properly, visitors to those banned sites, rather than accessing the content of the sites they chose to visit, will be automatically redirected to the Interior Ministry website. There, they will be greeted by a graphic of a large red hand, and text informing them that they were attempting to access a site that causes or promotes terrorism: “you are being redirected to this official website since your computer was about to connect with a page that provokes terrorist acts or condones terrorism publicly.”

No judge reviews the Interior Ministry’s decisions. The minister first requests that the website owner voluntarily remove the content he deems transgressive; upon disobedience, the minister unilaterally issues the order to Internet service providers for the sites to be blocked. This censorship power is vested pursuant to a law recently enacted in France empowering the interior minister to block websites.

Forcibly taking down websites deemed to be supportive of terrorism, or criminalizing speech deemed to “advocate” terrorism, is a major trend in both Europe and the West generally. Last month in Brussels, the European Union’s counter-terrorism coordinator issued a memo proclaiming that “Europe is facing an unprecedented, diverse and serious terrorist threat,” and argued that increased state control over the Internet is crucial to combating it.

The memo noted that “the EU and its Member States have developed several initiatives related to countering radicalisation and terrorism on the Internet,” yet argued that more must be done. It argued that the focus should be on “working with the main players in the Internet industry [a]s the best way to limit the circulation of terrorist material online.” It specifically hailed the tactics of the U.K. Counter-Terrorism Internet Referral Unit (CTIRU), which has succeeded in causing the removal of large amounts of material it deems “extremist”:

In addition to recommending the dissemination of “counter-narratives” by governments, the memo also urged EU member states to “examine the legal and technical possibilities to remove illegal content.”

Exploiting terrorism fears to control speech has been a common practice in the West since 9/11, but it is becoming increasingly popular even in countries that have experienced exceedingly few attacks. A new extremist bill advocated by the right-wing Harper government in Canada (also supported by Liberal Party leader Justin Trudeau even as he recognizes its dangers) would create new crimes for “advocating terrorism”; specifically: “every person who, by communicating statements, knowingly advocates or promotes the commission of terrorism offences in general” would be a guilty and can be sent to prison for five years for each offense.

In justifying the new proposal, the Canadian government admits that “under the current criminal law, it is [already] a crime to counsel or actively encourage others to commit a specific terrorism offence.” This new proposal is about criminalizing ideas and opinions. In the government’s words, it “prohibits the intentional advocacy or promotion of terrorism, knowing or reckless as to whether it would result in terrorism.”

There can be no doubt that such new criminal laws are specifically intended to ban ideas these governments dislike. The Canadian Centre for Policy Alternatives lays out numerous ways that the law will allow the government to imprison people for the expression of political ideas:

The new offence will bring within its ambit all kinds of innocent speech, some of which no doubt lies at the core of freedom of expression values that the Charter was meant to protect. . . .Even if the government exercises restraint in laying charges and arresting people, the result is an inevitable chill on speech. Students will think twice before posting an article on Facebook questioning military action against insurgents overseas. Journalists will be wary of questioning government decisions to add groups to Canada’s list of terrorist entities.

If someone argues that continuous Western violence and interference in the Muslim world for decades justifies violence being returned to the West, or even advocates that governments arm various insurgents considered by some to be “terrorists,” such speech could easily be viewed as constituting a crime.

To calm concerns, Canadian authorities point out that “the proposed new offence is similar to one recently enacted by Australia, that prohibits advocating a terrorist act or the commission of a terrorism offence-all while being reckless as to whether another person will engage in this kind of activity.” Indeed, Australia enacted a new law late last year that indisputably targets political speech and ideas, as well as criminalizing journalism considered threatening by the government.

Punishing people for their speech deemed extremist or dangerous has been a vibrant practice in both the U.K. and U.S. for some time now, as I detailed (coincidentally) just a couple days before free speech marches broke out in the West after the Charlie Hebdo attacks. Those criminalization-of-speech attacks overwhelmingly target Muslims, and have resulted in the punishment of such classic free speech activities as posting anti-war commentary on Facebook, tweeting links to “extremist” videos, translating and posting “radicalizing” videos to the Internet, writing scholarly articles in defense of Palestinian groups and expressing harsh criticism of Israel, and even including a Hezbollah channel in a cable package.

In this regard, having the French Interior Ministry now unilaterally block websites is the next logical step in this growing attack on free speech by Western governments in the name of stopping extremism and radicalism. The large red hand of state censors over the Internet is a perfect symbol of the prevailing mindset in the West, whose fondness for self-righteously condemning China and Iran for their attempts to control Internet content is bottomless. The ironic mass arrests by France of people who “glorify” terrorism — carried out in the immediate aftermath of the Paris “free speech” rally — largely targeted that country’s Muslims.

Let’s briefly note the futility of the French efforts: in the way that censorship efforts fail generally and are particularly doomed to failure in the Internet era. I’m currently in Germany, just a few miles from the French border, and am able to access all the banned sites. Reports suggest that the French government failed miserably on technical grounds to block the targeted sites, as at least four of the five are still fully available even in France. The owner of the hosting company for one of the banned sites, islamic-news.info, insisted on Twitter yesterday that he was never contacted with any request to remove offending material.

Beyond the technical issues, trying to legislate ideas out of existence is a fool’s game: those sufficiently determined will always find ways to make themselves heard. Indeed, as U.S. pop star Barbra Streisand famously learned, attempts to suppress ideas usually result in the greatest publicity possible for their advocates and/or elevate them by turning fringe ideas into martyrs for free speech (I have zero doubt that all five of the targeted sites enjoyed among their highest traffic dates ever today as a result of the French targeting).

But the comical futility of these efforts is exceeded by their profound dangers. Who wants governments to be able to unilaterally block websites? Isn’t the exercise of this website-blocking power what has long been cited as reasons we should regard the Bad Countries — such as China and Iran — as tyrannies (which also usually cite “counterterrorism” to justify their censorship efforts)? As those and countless other examples prove, the concepts of “extremism” and “radicalizing” (like “terrorism” itself) are incredibly vague and elastic, and in the hands of those who wield power, almost always expand far beyond what you think it should mean (plotting to blow up innocent people) to mean: anyone who disseminates ideas that are threatening to the exercise of our power. That’s why powers justified in the name of combating “radicalism” or “extremism” are invariably — not often or usually, but invariably — applied to activists, dissidents, protesters and those who challenge prevailing orthodoxies and power centers.

My arguments for distrusting governments to exercise powers of censorship are set forth here (in the context of a prior attempt by a different French minister to control the content of Twitter). In sum, far more damage has been inflicted historically by efforts to censor and criminalize political ideas than by the kind of “terrorism” these governments are invoking to justify these censorship powers.

And whatever else may be true, few things are more inimical to, or threatening of, Internet freedom than allowing functionaries inside governments to unilaterally block websites from functioning on the ground that the ideas those sites advocate are objectionable or “dangerous.” That’s every bit as true when the censors are in Paris, London, and Ottawa, and Washington as when they are in Tehran, Moscow or Beijing.