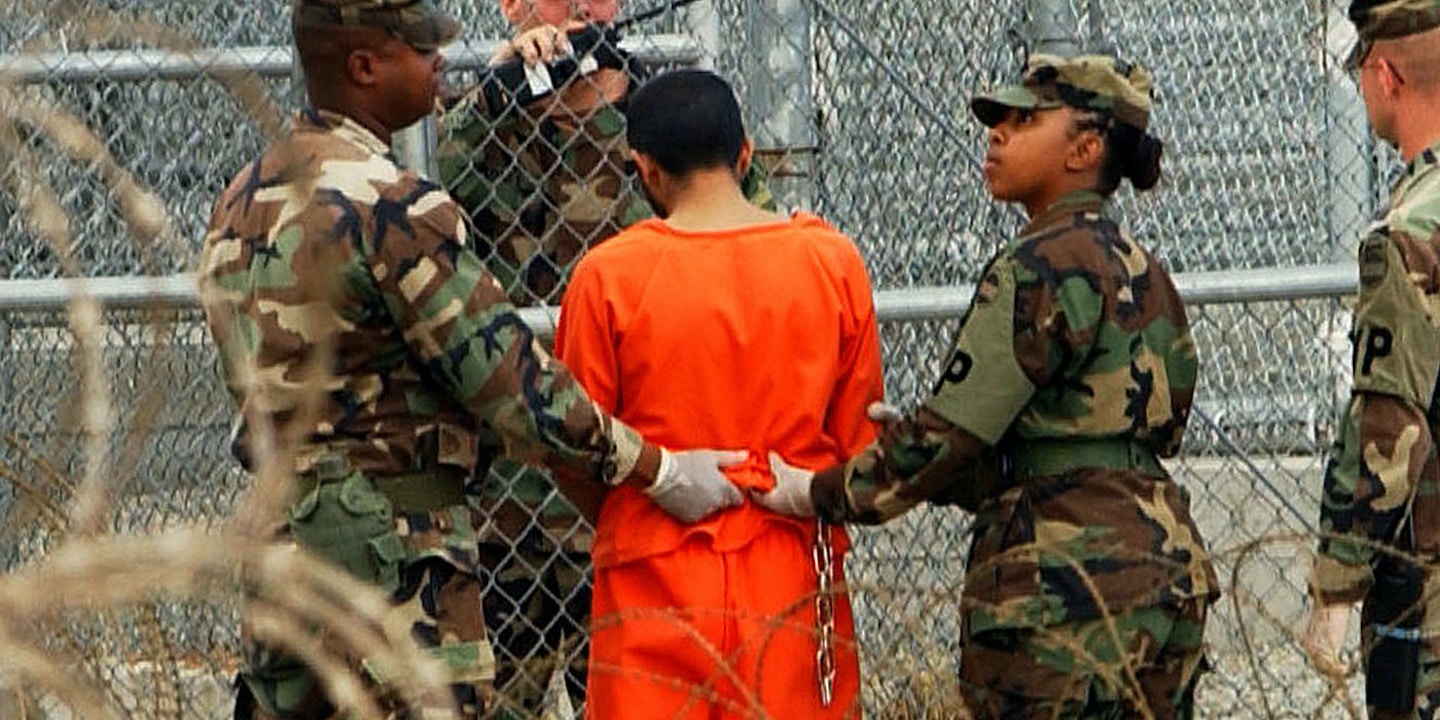 Moath Hamza Ahmed al-Alwi, a Yemeni national who has been detained at the American prison facility at Guantánamo Bay since 2002, weighs only 98 pounds. Never charged with a crime, al-Alwi, now 35 years old, is one of many detainees at the camp who have gone on a prolonged hunger strike.

As described in a recent petition submitted to the Inter-American Commission on Human Rights (IACHR) by his lawyers, al-Alwi’s mental and physical state is seriously deteriorating after two years on hunger strike, and subsequent force-feeding.

Since commencing his strike in February 2013, al-Alwi alleges that he has been subjected to escalating physical and psychological abuse from guards, as well as increasingly brutal force-feeding procedures administered by medical personnel at the camp. Human rights organizations have described the force-feeding procedure employed at Guantánamo as torture, and the U.S. government has fought to keep video footage of the force-feeding of al-Alwi and other hunger-striking detainees from public view.

Al-Alwi, who has described his strike as “a form of peaceful protest against injustice,” has said that he will not resume eating until there is some sort of legal resolution to his case. Prison officials have responded to his hunger strike by placing him in solitary confinement, denying him access to prescribed medical items and subjecting him to extreme temperatures in his cell.

In response to the allegations contained in the petition, a spokesman for the Office of Public Affairs at Guantánamo told The Intercept that there were numerous unspecified “inaccuracies and exaggerations” in al-Alwi’s account. The spokesman also added that medical care received by detainees at Guantánamo “is on the same level as that provided to U.S. Service members serving here,” adding that those detainees on hunger strike (termed “non-religious fasting” in official parlance) are “offered the opportunity to eat solid food prior to any enteral feeding.”

According to the petition, al-Alwi’s nostril passages have now swelled shut due to the extra large tubes prison authorities have repeatedly forced down his nasal cavity during this feeding process. He also maintains that the force-feeding sessions have led to heavy vomiting and daily blood loss. Shackled to a chair for hours each day during the force-feeding sessions, al-Alwi now suffers severe back pain and other debilitating physical injuries.

In his petition, al-Alwi describes his life in Guantánamo as “an endless horror story.”

In April 2013, a delegation from the International Committee of the Red Cross conducted a visit to Guantánamo to meet with detainees and assess conditions there. On the day immediately following their departure, armed guards raided a cellblock housing al-Alwi and several other hunger-striking detainees while they prepared for communal prayers.

The complaint further alleges that prisoners were physically assaulted by guards during this raid, some of whom fired rubber-coated steel bullets at them. Al-Alwi was among those wounded, with bullets hitting him in his thigh, elbow and back as he tried to flee from guards firing at him; those shots were allegedly fired from the other side of a chain-link fence.

Al-Alwi says that he has never received adequate medical treatment for these wounds; he was handcuffed and left to bleed for 20 minutes by guards before a doctor arrived. A few of his wounds were rubbed with anti-infection cream while the remainder have remained wholly untreated to this day. As a result, al-Alwi says that he suffers chronic and debilitating pain and swelling from these injuries.

The circumstances leading to al-Alwi’s detention at Guantánamo are obscure. One of hundreds of young Arab men who were captured by Pakistani bounty hunters following the Sept. 11 attacks, al-Alwi was not a known or wanted terrorist, but was nonetheless turned over to U.S. troops by locals in Pakistan for a cash reward later that year. On Jan. 16, 2002, he arrived at Guantánamo Bay where he has remained ever since.

A 2006 report by Amnesty International found that cash bounties offered for turning over “terrorists” to U.S. forces had effectively created a lucrative cash market for capturing young Arab men in Pakistan and Afghanistan. Fliers distributed by the U.S. government in the region offered “millions of dollars” in exchange for turning over purported Al-Qaeda and Taliban members, promising those who were able to render suspects to American custody “enough money to take care of your family, your village, your tribe for the rest of your life.”

Al-Alwi says that American interrogators tortured him until he made false confessions about his involvement in terrorism. Despite having now spent over a decade in custody, with no foreseeable prospect of release, he has not been charged with any crime.

Describing his brutal treatment by riot guards who come to restrain him for force-feedings, al-Alwi told his lawyers in the petition:  “I weigh less than 100 pounds. I wear braces on both ankles, and both wrists, and one around my lower back. I am five foot five … and they claim that I am ‘resisting’ … How can I possibly resist anyone, let alone these men?”