Former Dem Senator Chris Dodd Advised Execs to Give to GOP: “Fundraising Does Have An Impact”

The former senator, now a movie industry lobbyist, wrote that “while loyalty to a person and/or party is admirable, we also need to be smarter about being supportive of those who are and will be in positions to make decisions that affect this industry.” 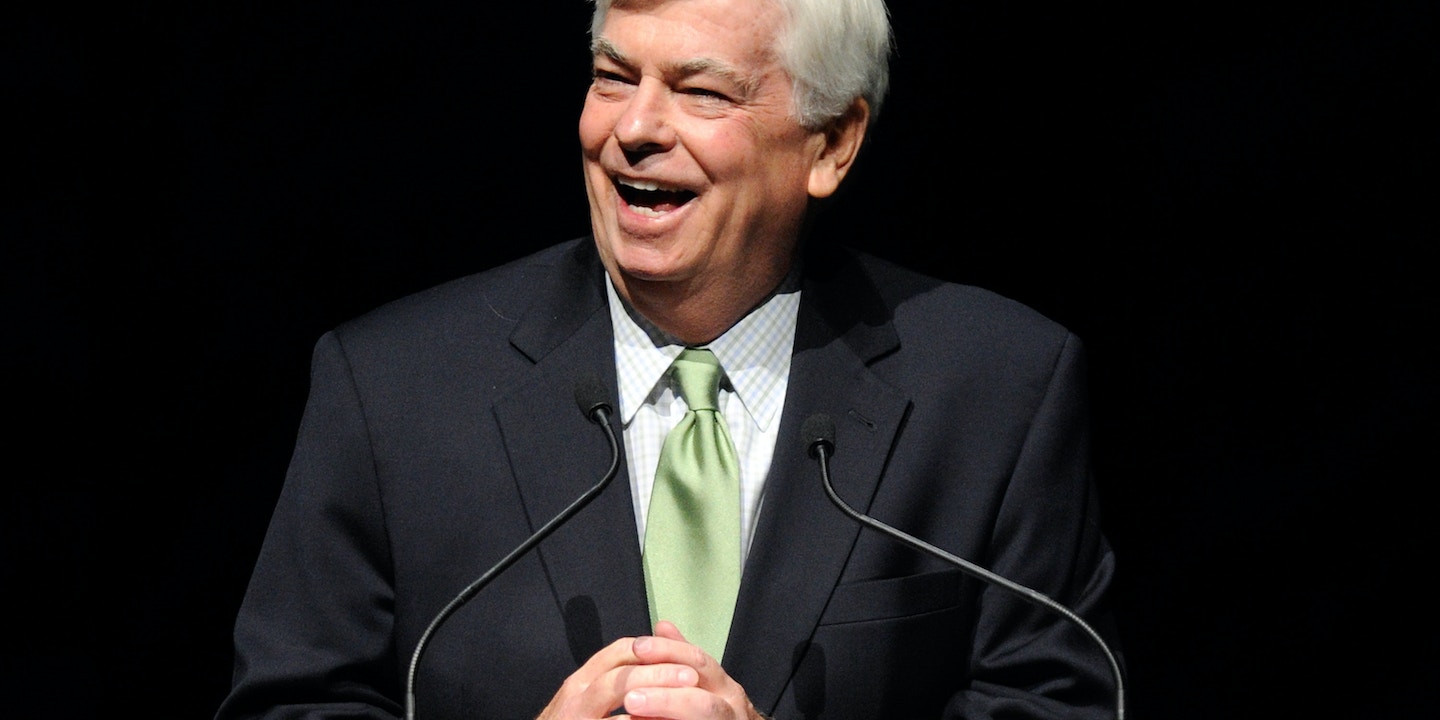 Chris Dodd’s first career was as the liberal U.S. Senator from Connecticut, a self-professed champion for working families and a Democratic presidential contender in 2008. But hacked emails from Sony offer new insight into how he operates in his second career, as the head of the Motion Picture Association of America, a lobby group for the movie industry.

On January 28, 2014, Dodd emailed executives from major motion picture studios to share two news articles. One revealed that Google had shifted its campaign donation strategy, giving more to Republican lawmakers, and another projected that the GOP would likely perform well in the midterm elections that year.

The articles, Dodd wrote, “underscore the point I’ve been trying to make, which I’m sure you all understand – while loyalty to a person and/or party is admirable, we also need to be smarter about being supportive of those who are and will be in positions to make decisions that affect this industry.”

Dodd listed a number of policy priorities for the industry, from tax credits to intellectual property law, and explained: “We need the capacity to gain and maintain relationships, and with campaigns getting more and more expensive, fundraising does have an impact.”

Dodd in particular encouraged industry executives to donate to Rep. Bob Goodlatte, R-Va., chairman of the House Judiciary Committee, which has jurisdiction over intellectual property and copyright issues important to the movie industry. Dodd evidently had to overcome one hurdle, however: Squeamishness about giving money directly to the National Republican Congressional Campaign, whose goal was to increase the GOP House majority.

In a November 7, 2013, email with “Call from Dodd regarding $$$ for Republicans” in the subject line, Keith Weaver, a senior government relations executive with Sony, wrote:

Chairman Goodlatte has established a new fundraising committee that would allow contributions to his effort WITHOUT giving to the NRCC (all of the studios had the same sensitivity on this as we did). Dodd is likely to call you with this news, tell you that the studio should support with $40k each, and tell you about the tentative date/time for this fundraiser (likely a lunch on 11/22). Our PAC can give $15k, the rest would need to come from individual execs.

Emphasis in the original.

Dodd chose not to run for reelection to his Senate seat in 2010, after revelations that he had received a special discount mortgage from Countrywide’s “VIP program.” During his time in Congress, Dodd was a senior member of the Banking Committee, a position that oversaw mortgage lenders.

As he retired, he told the public he would not become a lobbyist — though he soon signed up for the job as the movie industry’s top lobbyist, a gig compensated at over $3.2 million a year.

Dodd’s call for Democratic-leaning movie industry titans to give money to Republicans reveals a simple truth in American politics: Though pundits regularly complain about a bitter partisan divide, those with power and money can simply buy support from both parties. Indeed, the tech industry and much of the movie industry have come together on many major issues concerning intellectual property and privacy, from trade agreements to new cyber surveillance legislation — with strong bipartisan support in Congress.

As Dodd said, “fundraising does have an impact.”