Even NSA Chief Acknowledges Need for “Broad Discussion” About Cyberwarfare

Rogers likened cyberattacks to previous improvements in warfare. “Cyber represents change, a different technical application to attempt to achieve some of the exact same effects, just do it in a different way,” he said. “Like those other effects, I think, over time, we’ll have a broad discussion in terms of our sense of awareness, both in terms of capabilities as well as limitations.” That discussion is long overdue. 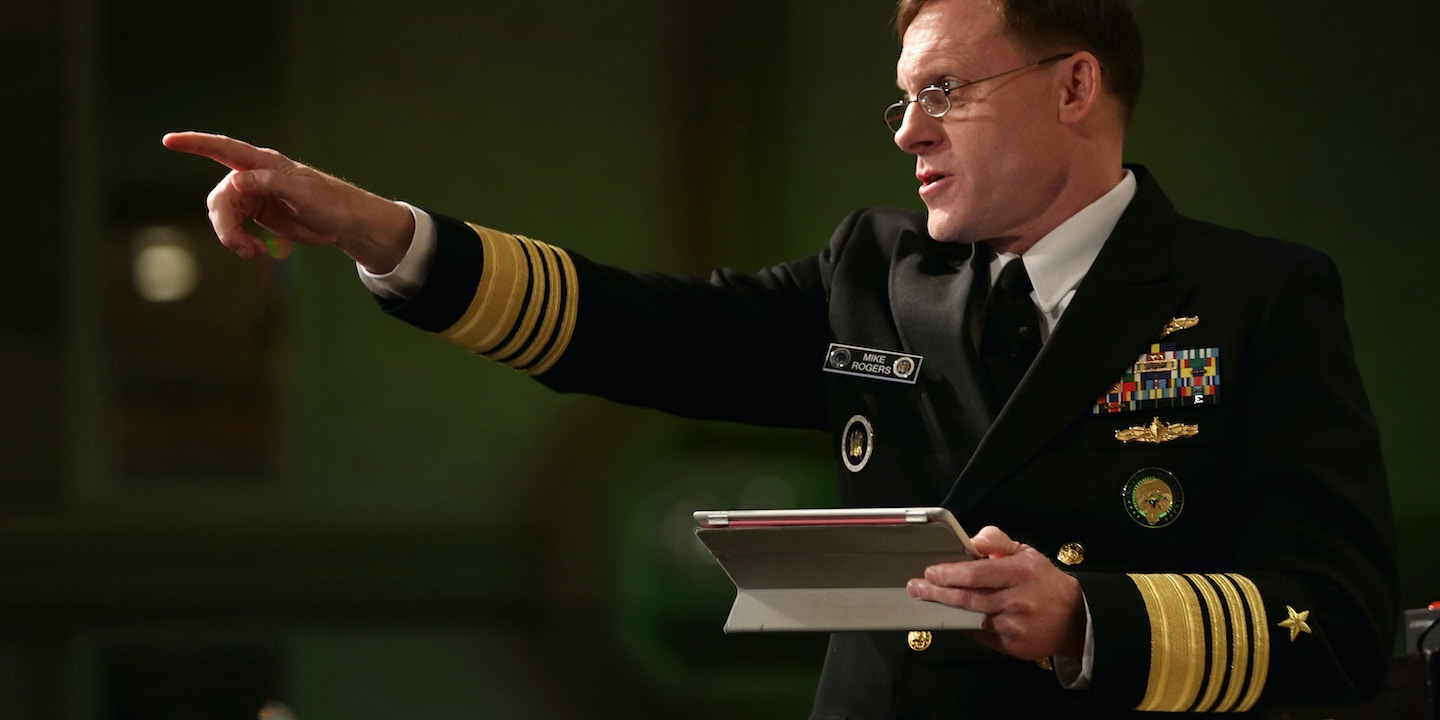 A whole new and very dangerous field of warfare has been developed by the Obama administration, in secret, using untested legal justifications, and without even the faintest whiff of oversight.

So kudos to Patrick Tucker, technology editor for Defense One, who took advantage of a recent moment with National Security Agency chief Michael Rogers to ask him: Is there a way to discuss publicly what the future of cyberwar operations will look like?

Rogers said, dismissively, that the public should trust that the U.S. will follow the international laws of conflict and that its use of cyberwarfare would “be proportional” and “in line with the broader set of norms that we’ve created over time.”

But he also acknowledged the need, at some point, for the public to have some sort of a say.

Rogers likened cyberattacks to the development of mass firepower in the 1800s. “Cyber represents change, a different technical application to attempt to achieve some of the exact same effects, just do it in a different way,” he said.

“Like those other effects, I think, over time, we’ll have a broad discussion in terms of our sense of awareness, both in terms of capabilities as well as limitations.”

That discussion is long overdue.

The almost always-wrong Washington Post editorial board had it exactly right when it wrote “now that the United States is going beyond defense, expanding forces for offensive attack, there’s a crying need for more openness. So far, forces exist almost entirely in the shadows.”

What concerns us is not the growth of forces but the way it is happening behind the scenes. The U.S. Cyber Command is a military unit, but its chief, Gen. Keith Alexander, is also director of the National Security Agency, which is part of the intelligence community. So far, operations and deployments are being handled almost entirely in secret.

Aside from a line in a speech last fall by Defense Secretary Leon Panetta, and some vague language in a 2011 strategy paper, the missions, purpose and scope of conflict have yet to be satisfactorily revealed. One large missing piece is a declaratory policy similar to that used for nuclear weapons in the Cold War, when nuclear policy was openly debated without divulging important secrets. There’s also little public information about rules of engagement for forces or about chain of command and authority to use them. The nature of the threat should also be exposed to a generous dose of sunlight. If conflict in cyberspace is underway, then it is important to sustain support for the resources and decisions to fight it, and that will require more candor.

You may have gathered by the reference to Alexander and Panetta that this was not a recent editorial. In fact, it came out two years ago. The response: *crickets*.

David Sanger’s 2012 book Confront and Conceal: Obama’s Secret Wars and Surprising Use of American Power, described the Obama administration’s previously secret cyberwar campaign against Iran, and raised the very excellent question: “What is the difference between attacking a country’s weapon-making machinery through a laptop computer or through bunker-busters?”

No answer was forthcoming.

The thing of it is that history has shown time and again that secrecy and bad decisions go hand in hand.

As Chase Madar, an attorney and the author of The Passion of Bradley Manning: The Story Behind the WikiLeaks Whistleblower, wrote in 2013: “what gets people killed, no matter how much our pols and pundits strain to deny it, aren’t InfoSec breaches or media leaks, but foolish and clueless strategic choices.”

Cyberwarfare will be with us forever. Its potential for destruction is immense. Establishing rules for our use is not just a matter of public interest, it’s also the first step to establishing genuine, enforceable international norms, to protect us all.