Gov. Bobby Jindal now rails against “hyphenated Americans.” But not long ago, the Louisiana governor touted his Indian-American heritage. 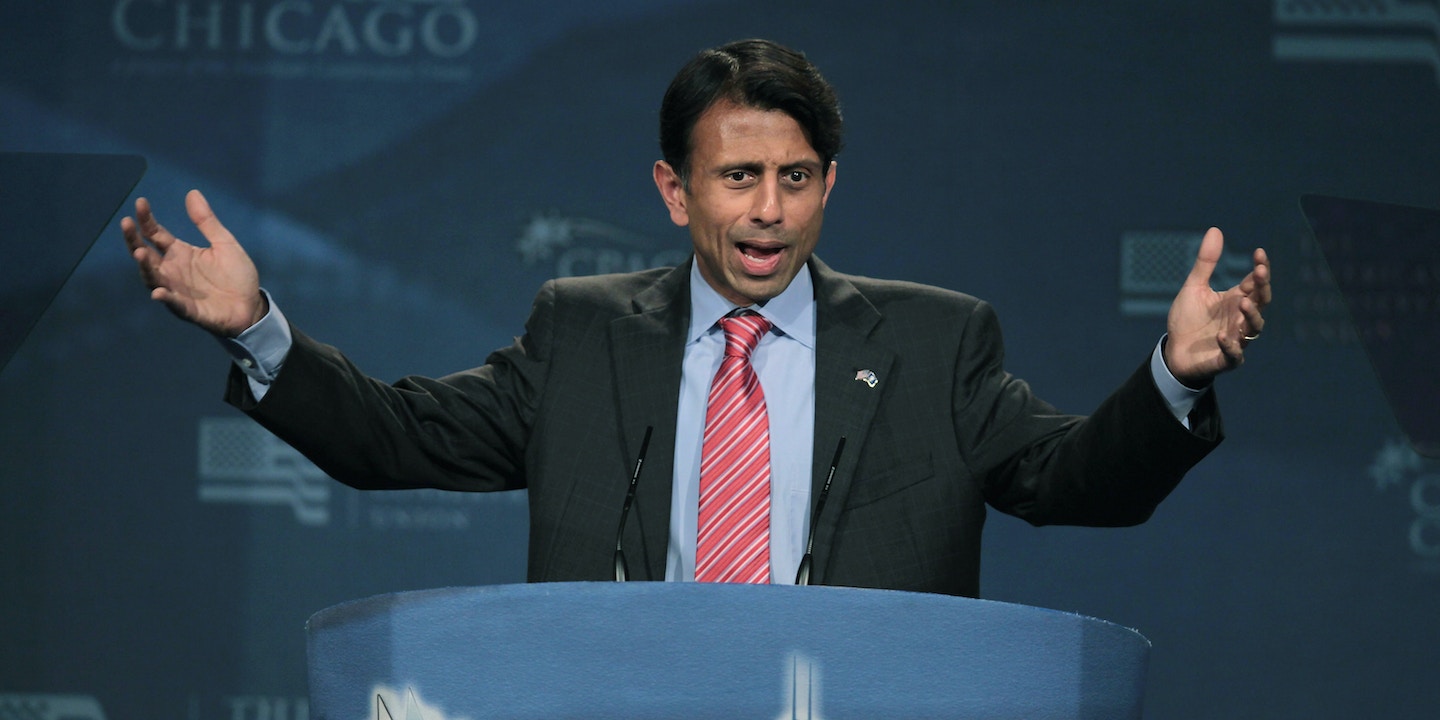 “We are not African-Americans, we are not Asian-Americans, we are not Indian-Americans,” Bobby Jindal, R-La., said to roaring applause at the South Carolina Freedom Summit in Greenville on Saturday. As Jindal tours the early primary states for a likely presidential bid, the Louisiana governor’s disdain for “hyphenated Americans” has become a central part of his campaign.  Jindal took it up a notch in Greenville, referencing the use of hyphenated identities in his claim that President Barack Obama “tries to divide us by race.”

Watch recent clips of Jindal’s campaign against “hyphenated Americans” during speeches to CPAC, the First in the Nation convention in New Hampshire, and at the United Freedom Summit in South Carolina:

But not long ago, Jindal embraced his hyphenated identity, using it to boost his quick ascent up the political ladder.

In Congress, Jindal co-sponsored a resolution to recognize the accomplishments of the “Indian American” community. He also regularly spoke proudly of his heritage as an Indian-American during media interviews and embraced the term for years as he raised millions of dollars in campaign cash from the Indian-American community.

A former Assistant Secretary for Health and Human Services in the George W. Bush administration, Jindal began his rise to elected office in 2003 with his first bid for governor. During the campaign, Jindal raised money from Indian-American-organized fundraisers in New York and Washingtion. At a fundraiser in Georgetown, Jindal thanked the crowd, saying he was “especially grateful to the Indian-American community because with your support we’ll be able to go on television,” according to India Abroad.

Following his defeat, Jindal appeared at the Asian American Hotel Owners Association to accept an award. India Abroad covered that event as well:

“The first reason I wanted to come today was to thank you. I came to you as a 31-year-old Indian American and said I want to be the next governor of Louisiana, and you embraced me. No other group was nearly as generous or as supportive [as AAHOA]. You truly were my family.”…

“As I am raising my children, I am truly realizing what’s important about being an Indian American,” Jindal said. Recalling the journey of his parents to the United States, he said, “They started with nothing and my mother was pregnant with me when she flew over to the States. My father didn’t have a job, and he came here and found a job. But they did OK because the Indian-American community embraced them and helped them get started.”

“My grandmother wasn’t there when I was born, but the Indian-American community was,” Jindal said, to roars of approval.

Following his 2004 victory, Jindal was invited to both the State Department luncheon and White House state dinner with Indian Prime Minister Manmohan Singh. India Abroad asked Jindal about the honor:

JINDAL: Absolutely. No question about it.

Watch a compilation of clips of Jindal celebrating his Indian-American identity:

Jindal’s current crusade against “hyphenated” Americans began earlier this year in a speech to a conservative think tank in London.

Jindal claimed that, “in the West, non-assimilationist Muslims establish enclaves and carry out as much of Sharia law as they can without regard for the laws of the democratic countries which provided them a new home.” Unlike these Muslims communities, Jindal claimed, his family came to this country to become “not Indian-Americans, simply Americans.” Jindal argued that although he is not saying anyone “should be shy or embarrassed about their ethnic heritage,” he was “explicitly saying that it is completely reasonable for nations to discriminate between allowing people into their country who want to embrace their culture, or allowing people into their country who want to destroy their culture, or establish a separate culture within.”