Both the president and the Pentagon have proclaimed that global warming is a threat to U.S. national security. But there’s no sign that the FBI is wiretapping fossil fuel company CEOs. 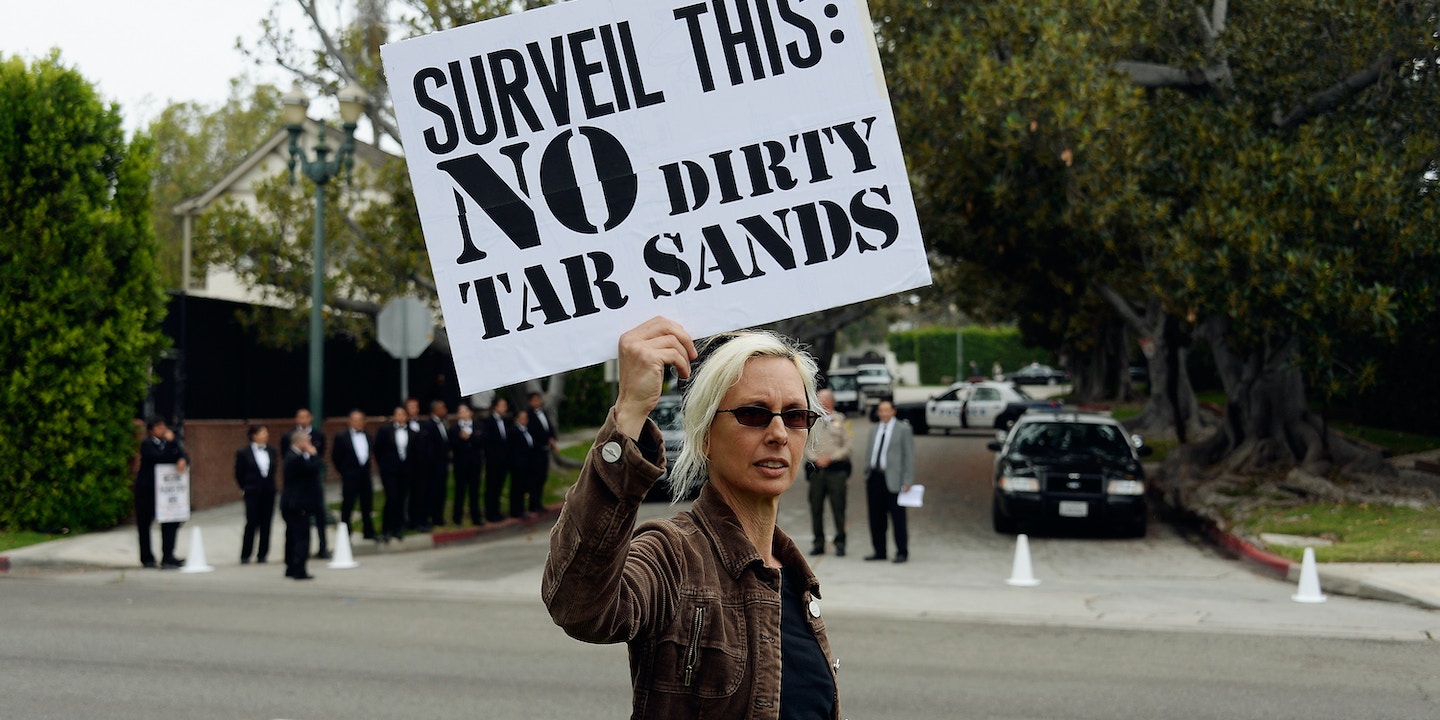 The FBI has wide leeway to conduct surveillance on possible threats to “national security.” Where the rubber meets the road, of course, is who the Bureau decides constitutes such a threat.

Both the president and the Pentagon have proclaimed that global warming is a threat to U.S. national security. But there’s no sign that the FBI is wiretapping fossil fuel company CEOs.

On the contrary, in fact: as an FBI document published last week by the Guardian and Earth Island Journal demonstrates, the FBI has monitored members of Tar Sands Blockade, an organization trying to stop the Keystone XL Pipeline because its members believe it would mean “game over” due to climate change. Part of the FBI’s justification was that the “Keystone pipeline, as part of the oil and natural gas industry, is vital to the security and economy of the United States.”

According to the Guardian, FBI files show it conducted an investigation into Tar Sands Blockade members in which the Bureau “collated inside-knowledge about forthcoming protests, documented the identities of individuals photographing oil-related infrastructure, scrutinised police intelligence and cultivated at least one informant.”

The Guardian adds that “the documents connect the investigation into anti-Keystone activists to other ‘domestic terrorism issues’ in the agency and show there was some liaison with the local FBI ‘assistant weapons of mass destruction coordinator.’”

And that “the FBI files appear to suggest the Houston branch of the investigation was opened in early 2013, several months after a high-level strategy meeting between the agency and TransCanada, the company building the pipeline.”

At the time of the FBI’s surveillance, Tar Sands Blockade members were attempting to stop the development of the Keystone XL pipeline, using non-violent tactics like locking themselves to pipeline equipment and climbing trees slated to be cleared for construction.

Over the last few days, another group of anti-oil extraction activists boarded kayaks in Seattle and surrounded an Arctic-bound drilling rig owned by Shell, eventually blocking entrances to a pier where one of the rigs was docked.

It is yet unclear whether the federal government views the blockaders as threats to or defenders of the nation’s security. But Obama’s 2013 Arctic strategy is unambiguous: oil resources in the Arctic, it says, “factor into a core component of our national security strategy.”

Correction: An earlier version of this story incorrectly stated that Tar Sands Blockade is using particular non-violent tactics to stop the Keystone XL pipeline. The story has been updated to reflect that, because the southern portion of the pipeline, where the group’s work has centered, was completed and began pumping oil to Gulf Coast refineries in early 2014, members are not currently focused on physically blocking its construction. The group does continue to work with communities directly impacted by the oil and gas industry.