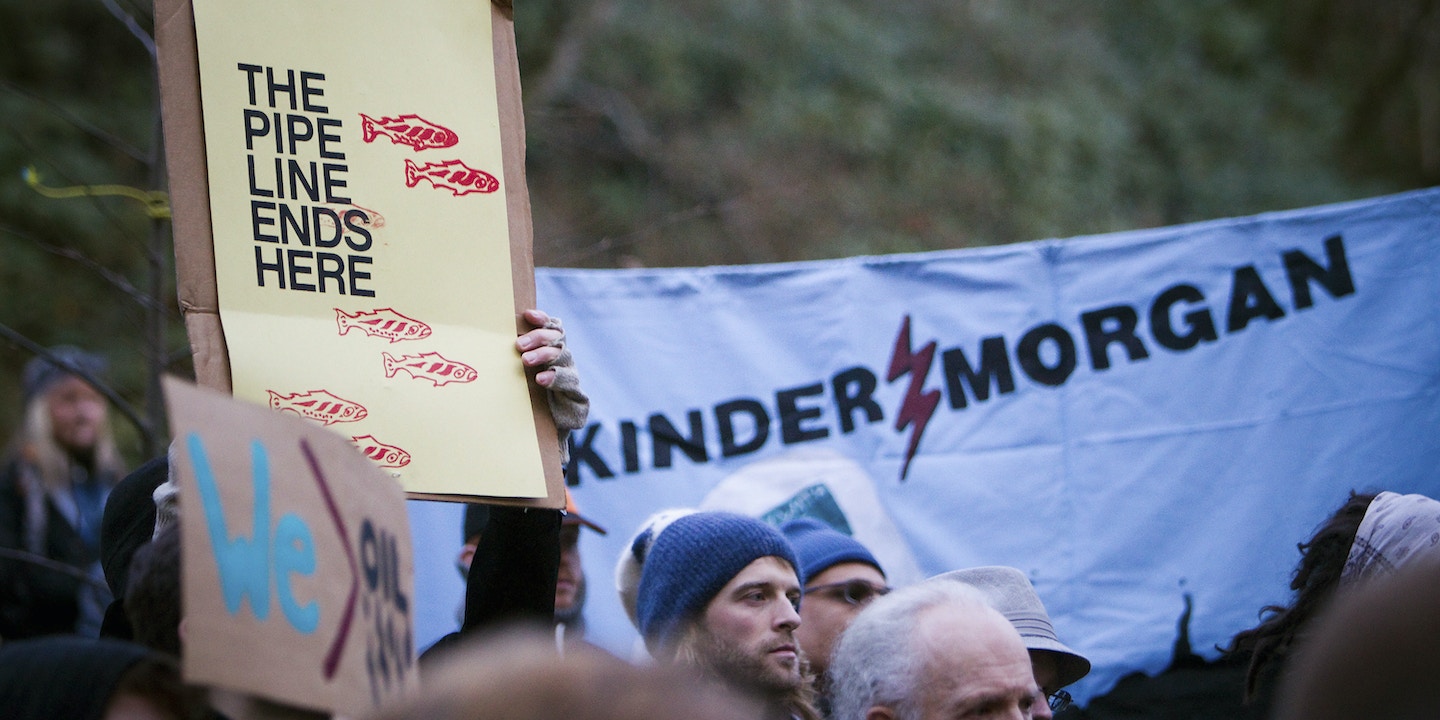 Kinder Morgan, the self-proclaimed “largest energy infrastructure company in North America,” paid $50,000 for off-duty police officers from a Pennsylvania department to patrol a controversial gas pipeline construction site. The hiring came after a request from the corporation for uniformed officers that could “deter protests and prevent delays,” according to a report by Earth Island Journal’s Adam Federman.

What’s unique about the case is not that a corporation paid off-duty officers to protect oil and gas infrastructure — a common but rarely acknowledged practice — but that a document indicates that the explicit purpose of the police presence was to stymie dissent.

Federman published a May 2013 letter from Kinder Morgan’s manager of corporate security to the police chief of the Eastern Pike Regional Police Department, requesting use of its officers “to provide a visible presence in our construction areas to create a deterrent effect.” The corporation asked the department to monitor its Northeast Upgrade Project, an expansion of the Tennessee Gas Pipeline, which would cut through environmentally sensitive areas of Pennsylvania. The officers were paid $54.80 per hour for their work.

The document adds, “Due to the controversial nature of the project Kinder Morgan has experienced protests from local activists who oppose the pipeline, which has resulted in costly delays. … The objective is for a uniformed officer to be seen frequently making spot checks of our construction areas and be available to respond should protesters attempt to block those sites.”

Off-duty cops are regularly hired to protect all sorts of moneyed interests across the U.S. As of 2007, according to Department of Justice statistics, 83 percent of departments had a policy on off-duty employment. Although policies vary by locality, hired cops are generally allowed to wear their uniforms and maintain the powers of active officers, making them in many cases indistinguishable from their on-duty counterparts.

The Pennsylvania police department loaned its cops to Kinder Morgan through a Texas-based contractor called Off Duty Services. According to its web site, two of the company’s primary services include “pipeline security” and “critical infrastructure protection,” such as for electric utilities. It also hires cops to watch petrochemical plants, corporate headquarters, laboratories, retail stores and banks.

The practice drew new scrutiny last October when 18-year-old VonDerrit Myers was shot and killed by an off-duty officer working for a private security firm hired by a nearby residential association.

There are clear First Amendment implications when activists whose interests conflict with corporations encounter contracted off-duty police. In Utah, a journalist and activist filed a lawsuit after being stopped outside an oil refinery in December 2013 by an off-duty officer who explained, according to the complaint, that the refinery is “critical infrastructure and you’re taking pictures of it.” The suit claims the officer “explained that it is the policy of Salt Lake City Police officers employed by Tesoro to stop and question anyone filming or photographing the Tesoro Salt Lake City refinery.” The city denied the allegation, and the case is pending.

A Kinder Morgan spokesperson told Federman that “Kinder Morgan has no interest in limiting constitutionally protected free speech rights and legitimate, lawful protest activity,” and that its letter to the police department was written after “months of coordinated, documented, illegal attempts to interfere with pipeline construction activities.”

Still, Mary Catherine Roper, deputy legal director of the ACLU in Philadelphia, told Earth Island Journal: “If they are actually being instructed to deter protest that’s not okay. … That’s just flat out unconstitutional.”