Crowdfund to Afford a Meeting with Hillary Clinton? Activist Behind “Hillstarter” Speaks Out 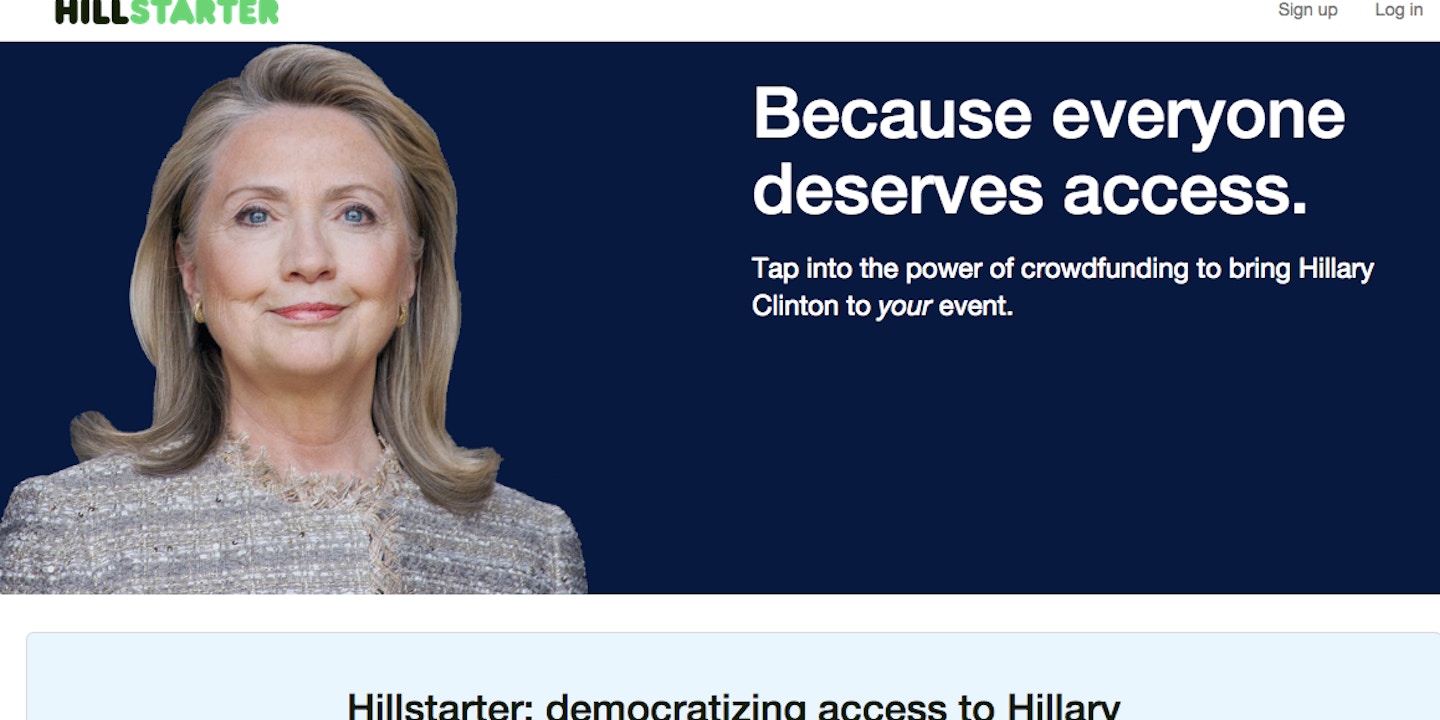 A ticket to a dinner with Jeb Bush’s SuperPAC runs $25,000. Lawmakers flock to private retreats at secluded luxury hotels. And Hillary Clinton’s six-figure speaking fees and expensive fundraisers have created the appearance that the Democratic front-runner associates primarily with wealthy elites.

What to do? Enter Hillstarter.us, “a disruptive, innovative platform that democratizes access to Hillary Clinton by letting you pool your money with others to raise enough to get Hillary’s attention.”

The website advertises that all it takes “to raise enough money to cover Hillary’s speaking fee is a Hillstarter campaign and tens of thousands of friends!” For instance, Hillstarter suggests, former garment workers in Cleveland could collectively pony up enough money to meet Clinton and help her “understand the Trans-Pacific Partnership.”

Unfortunately for anyone who thinks that might actually work, Hillstarter is a work of satire by activist Jason Lefkowitz.

Lefkowitz said in an interview that the idea for Hillstarter came to him after reading that Bill and Hillary Clinton took in more than $25 million in speaking fees since last year, an amount he found shocking. The fact that powerful corporations have been able to pay to secure access to Clinton struck Lefkowitz as unsavory.

“Part of the point I was trying to make with Hillstarter was that so much money sloshes around in the system now that even if the public at large decided to try and compete in the same arena, doing so would be really difficult,” Lefkowitz said.

Lefkowitz said he’s a Democrat and hopes that whoever wins the party’s nomination will be able to speak credibly about inequality. He doesn’t think Clinton’s speaking fees prevent her from addressing the issue, “but I also don’t think they do her any favors in that regard,” he said.

For the record, Lefkowitz said no one should take his proposal seriously. “I would not advise anyone to actually try; Hillstarter was intended to make a satirical point only, and besides, most people have more important demands on their finances to deal with, like mortgages and credit cards and student loans,” he said.