That’s similar to the career path of other key members of the Obama team, such as his former Budget Chief Peter Orszag, who receives an annual $4 million salary for this: 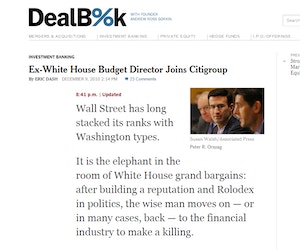 Then there’s Obama’s 2008 campaign manager and White House adviser, David Plouffe, whose days are now occupied with this: 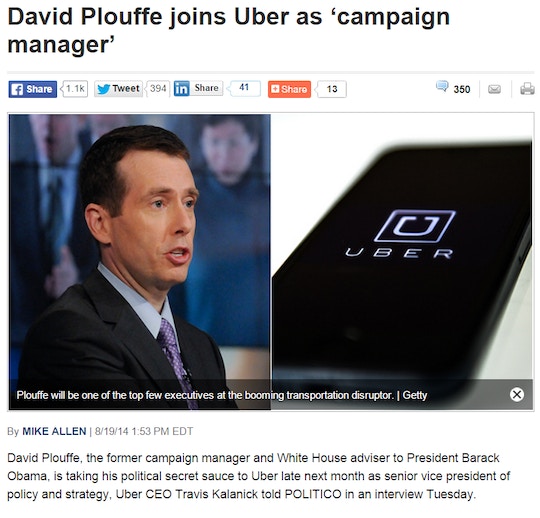 At least Obama’s 2012 campaign manager, Jim Messina, stayed in politics — to do this: So many Obama officials have “spun through the revolving door” that it’s almost impossible to count them all. In March, The Guardian described “a rash of senior White House staff jumping ship for well-paid lobbying jobs at some of America’s biggest and most controversial companies.” The article appeared under this headline: As The Guardian noted, “when he took office, Obama signed an order that the White House said ‘closes the revolving door that allows government officials to move to and from private sector jobs in ways that give that sector undue influence over government.'” Moreover, “in the campaign before the 2008 election, Obama said: ‘I am in this race to tell the corporate lobbyists that their days of setting the agenda in Washington are over.’”

People who leave high government positions have all sorts of career opportunities and options because of the political influence they wield, and their choices about how to use that influence speak volumes — about Washington and about themselves. As Julia Carrie Wong put it today in a series of tweets: “It’s hard to think of a political identity with *less* actual meaning than being a Democrat these days. As a proud Democrat, Gibbs will devote his time to fighting wage increases, harming the environment, and preying on poor communities. His brother in arms Plouffe will focus on the core Democratic values of deregulation and obviating the National Labor Relations Act.”

The Obama revolving door has worked in the other way, too: so many early appointees came from Goldman Sachs that it was hard to keep track of them all. And, of course, the greatest enrichment of American political officials is reserved for those who are president or otherwise achieve full political celebrity. But the remarkably homogeneous post-White House career path of Obama’s top tier of aides and advisers is notable in all sorts of ways.

UPDATE: As I indicated, there were far too many examples to list them all, but David Mizner reminds me of one key oversight: ladies and gentlemen, the lifelong “public servant” Tim Geithner: