Hayden Mocks Extent of Post-Snowden Reform: “And This Is It After Two Years? Cool!” Hayden mocked the loss of the one program that was reined in — the NSA’s bulk collection of metadata information about domestic phone calls — calling it “that little 215 program.”

And he said if someone had told him two years ago that the only effect of the Snowden revelations would be losing it, his reaction would have been: “Cool!”

Here is the video and the full text of his remarks:

If somebody would come up to me and say “Look, Hayden, here’s the thing: This Snowden thing is going to be a nightmare for you guys for about two years. And when we get all done with it, what you’re going to be required to do is that little 215 program about American telephony metadata — and by the way, you can still have access to it, but you got to go to the court and get access to it from the companies, rather than keep it to yourself” — I go: “And this is it after two years? Cool!” 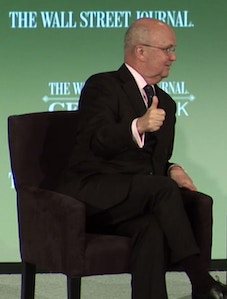 Hayden was speaking at the annual meeting of the Wall Street Journal CFO Network, an event hosted “by the Journal’s senior editors” for “an invitation-only group of more than 100 chief financial officers of the world’s largest companies.”

Asked if he thought Snowden was a foreign agent, Hayden said: “I’ve got my suspicions,” although he acknowledged, “I’ve got no evidence.”

Some opponents of massive government surveillance hailed the passage, earlier this month, of the USA Freedom Act. And it did, in fact, mark the first time that Congress has limited the executive branch’s surveillance authority over four decades of explosive growth.

But some observers noted that it was a very small step at best. The program was just one out of the multitude Snowden revealed — and was so blatantly out of line that its end was virtually a foregone conclusion as soon as it was exposed.

Seemingly irreconcilable media coverage reflected the reality that the reform bill was both important and, from the NSA’s perspective, trivial.

Hayden’s remarks were the most blunt yet emphasizing that latter point.