Gov. Nikki Haley declared on Monday that “it is time” for South Carolina to remove the Confederate flag from its capitol’s grounds in Columbia.

Taking down the flag — which will require a two-thirds vote by both the state senate and assembly — seems like a good start, but maybe not the place to end. When the Soviet Union collapsed, the flag was changed, statues were pulled down, and streets and entire cities were renamed, even if it made the remaining hardline communists unhappy.

If white supremacy is ever going to collapse in the U.S., the same things have to happen here. Charleston, where nine African-American members of the Emanuel AME Church were murdered last week on account of the color of their skin, seems like a good place to start. The people there have an opportunity to make a statement like Russians did by changing which history they celebrate.

I don’t say this to be self-righteous; every other place in America also celebrates the ugliest parts of our past. I just went to the ATM to get some $20 bills with pictures of Andrew Jackson, whose soldiers made bridles from Native Americans’ skin during the Creek War in 1814. But Charlestonians have a chance now to face history in a way that will improve the future.

Here are some possibilities:

1. Change the name of Calhoun Street In all the news coverage of the shooting at Emanuel AME Church, it’s rarely been mentioned that it’s located at 110 Calhoun, a street named after John C. Calhoun.

That’s right: family members of those killed have to go to memorial services at Emanuel AME and look at street signs honoring one of the most rabid supporters of slavery in American history.

Calhoun was vice president from 1825 to 1832, during the administrations of John Quincy Adams and Andrew Jackson, and then became a powerful U.S. senator from South Carolina. Calhoun himself owned a plantation and lots of people. He pushed not just for the preservation of slavery but its expansion into new territories to the west. And he was a major advocate of 1850’s Fugitive Slave Act.

The purest expression of Calhoun’s worldview can be found in his February 1837 speech in which he called for the Senate to refuse even to consider petitions calling for abolition. According to Calhoun, such petitions were an act of “aggression,” and if he and his allies were to “concede an inch,” they would have to be “prepared to become slaves” (really). Then he went beyond those slavery supporters who said it was a necessary evil, to claim it was “a positive good” — not just for slaveowners, but for the people they enslaved.

According to a pamphlet from Clemson University, which now owns Calhoun’s old plantation home, the perspective of those Calhoun owned “is virtually voiceless in history.” If their names are known, it’s “primarily because of actions that displeased the Calhouns” — like Aleck, who escaped and was whipped 30 times when he was recaptured.

2. Take down the Calhoun statue in Marion Square 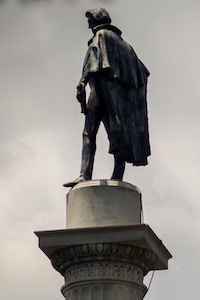 Marion Square is on Calhoun Street half a block from the Emanuel AME Church. Its most prominent feature is a statue of Calhoun standing on an 80-foot high pillar. The base of the pillar has a marker reading “1787 – 1850: Truth, Justice and the Constitution.”

Mamie Garvin Fields, an activist and Charleston native born in 1888, remembered in her memoir, Lemon Swamp and Other Places, that “we hated all that Calhoun stood for … Blacks took that statue personally. As you passed by, here was Calhoun looking you in the face and telling you, ‘Nigger, you may not be a slave, but I am back to see you stay in your place.'” According to Fields, “We used to carry something with us, if we knew we would be passing that way, in order to deface that statue … whites had to come back and put him way up high, so we couldn’t get to him.”

A hole underneath the pillar’s cornerstone holds a lock of Calhoun’s hair. Calhoun had an evil political philosophy, but I think everyone can agree his hair was spectacular. Maybe after his statue is removed it can be gifted to a hair salon.

What makes the Calhoun statue especially bizarre now is that in 1999 a memorial to victims of the Nazi holocaust was added to Marion Square. Say what you want about Germany, at least they don’t have memorials to the victims of American slavery 50 feet away from giant statues of Heinrich Himmler.

3. Get rid of the “Confederate Defenders” statue

This statue in Charleston’s White Point Garden was recently “vandalized” with graffiti saying “#BlackLivesMatter.” It was erected in 1932 by the United Daughters of the Confederacy, and funded by a $100,000 bequest in the will of Andrew Buist Murray, a wealthy Charleston businessman. Inscriptions read “To the Confederate Defenders of Charleston” and “Count them happy who for their faith and their courage endured a great fight.”

Especially given that the warrior in the statue is holding a shield with the seal of South Carolina, and the statue’s seven steps represent the original seven states of the Confederacy, it seems like now’s the time to yank this thing offstage. Charleston was incorporated in 1783, but that phrasing is such a violent distortion of history that here in 2015, it seems like it would be much more polite to drop the “A.D. 1783” part so it just reads “Given to the rule of the citizens.” And then maybe add “???”

5. Do something about the William Moultrie statue and the regular South Carolina flag This is probably a stretch goal.

When a statue of William Moultrie was dedicated in White Point Garden in 2007, former South Carolina governor James Edwards said it “represents freedom and liberty, from now to eternity, for this great nation.” The base of the statue reads, “This monument represents the high esteem in which all who love freedom hold Charleston’s native son, William Moultrie.”

And it’s true that William Moultrie was an important general in the American Revolution. But he also owned a rice plantation and about 200 people. And in 1775 when many slaves escaped to Sullivan’s Island just offshore from Charleston, drawn by promises by the British that they would be freed, Moultrie commanded a raid on the island that captured many and murdered 50 who would not surrender. Moultrie later designed a flag to be used by South Carolina’s troops during the revolution, featuring a crescent moon reading “LIBERTY.” This design was eventually incorporated into the South Carolina state flag, where it remains to this day.

It was people like Moultrie whom British writer Samuel Johnson was thinking of when he asked, “how is it that we hear the loudest yelps for liberty among the drivers of negroes?” At the least it might be nice to pencil in “for some people” on the Moultrie statue after “all those who love freedom.”

I’m sure there’s much more that could be added to this list. If you’re from South Carolina and would like to make some suggestions, please get in touch. (Also please get in touch if you have any ideas for getting Andrew Jackson off our money.)