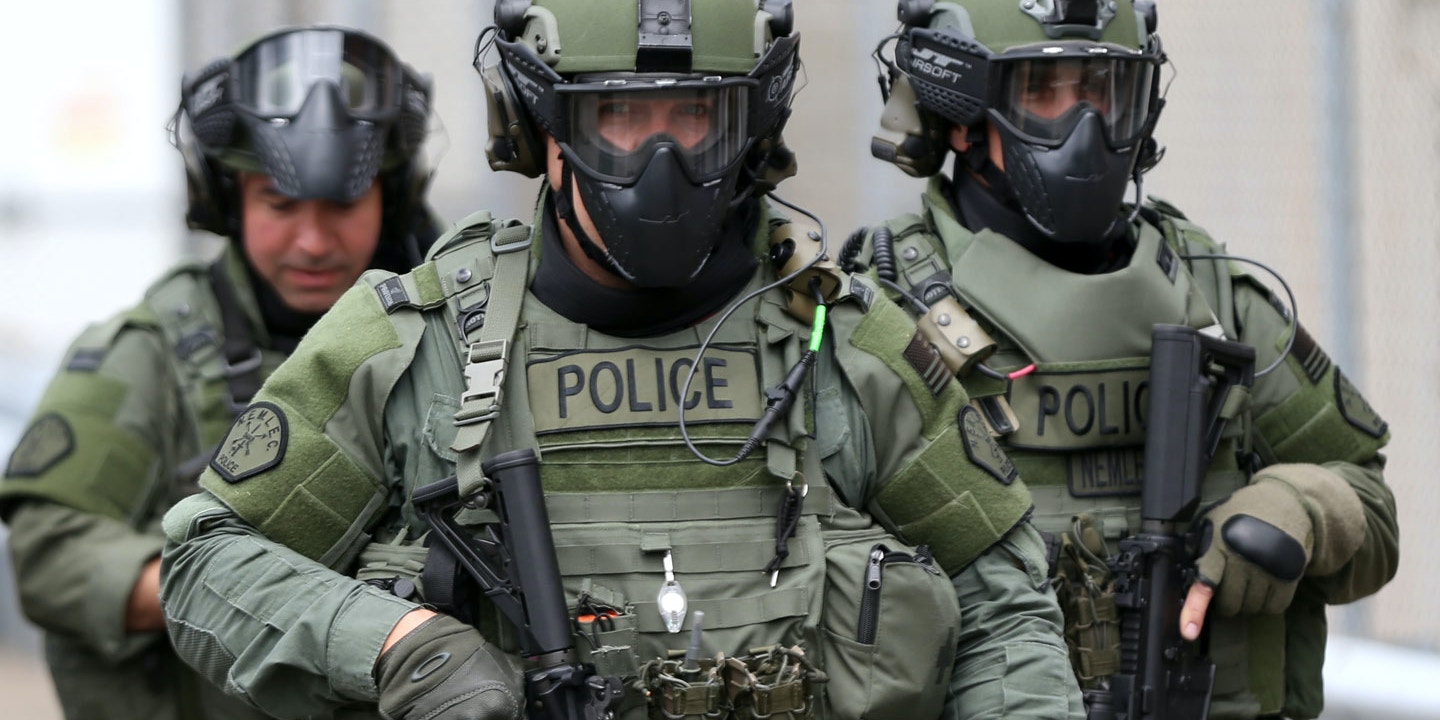 Extensive records from SWAT team raids in northeastern Massachusetts released today by the American Civil Liberties Union corroborate what police reform advocates have long insisted: that “Special Weapons And Tactics” units spend a majority of their time responding to low-risk situations that do not require SWAT’s quasi-military approach.

The documents include after-action reports from 79 SWAT operations between August 2012 and June 2014 by the Northeastern Massachusetts Law Enforcement Council, or NEMLEC, a consortium of police departments covering 925 square miles in Middlesex and Essex Counties outside Boston. According to NEMLEC, its SWAT team exists to respond to “critical incidents,” mainly “active shooters, armed barricaded subjects, hostage takers, and terrorists.”

However, an examination of the records by the The Intercept demonstrates that such critical incidents are few and far between in Northeast Massachusetts. Nonetheless, SWAT teams frequently roll out in “NEMLEC Communities,” carried in BearCat armored response vehicles and armed with flash-bang grenades.

Just one of the 79 SWAT deployments in 2012-14 — assistance with the search for the perpetrators of the Boston Marathon bombing — involved terrorism. Other SWAT actions during that period show no hostage situations, no active shooters and only 10 non-suicidal barricaded subjects.

About half of the remaining cases involved everyday and often mundane police activity, including executing warrants, dealing with expected rioting after a 2013 Red Sox World Series game, and providing security for a Dalai Lama lecture. In one mission, 15 SWAT team members roved through Salem’s Halloween celebrations looking out for unspecified “gang-related activity,” but were warned by their commanders to maintain a “professional demeanor” given that “everyone has a camera phone and you don’t want to be on YouTube or the news later.”

Pete Kraska, a professor at Eastern Kentucky University who has spent his career studying the militarization of police, argues that the use of SWAT units in drug operations unnecessarily exposes poor communities to paramilitary forces.

“It is really significant to remember that SWAT teams prior to the 1980s drug war were confined strictly to reactive, dangerous situations,” Kraska told The Intercept. “But in our research today we find that over 80 percent of the time police departments are using SWAT teams for proactive cases. These deployments are generally targeted at low-level drug dealers … and usually they’re just doing it for collecting evidence — not necessarily to even arrest a well-known, armed, dangerous drug dealer.”

Indeed, of the 21 SWAT narcotics warrant operations detailed in the documents, only five of them even mention recovering drugs. And the largest of these finds was five ounces of cocaine and 61 grams of heroin — hardly the stash of the next Sinaloa Cartel.

And despite the pettiness of their operations, the NEMLEC SWAT teams’ forceful tactics would make one think they were on the hunt for Osama bin Laden.

More than half of the SWAT teams’ drug operations were initiated at 3:30 or 4:00 a.m. Furthermore, of the 22 narcotics operations detailed in the documents over the two years, 14 included warrants authorizing SWAT teams to conduct “no knock” raids and four authorizing “knock and announce” raids — both of which are forceful entry options that have made national headlines for the accidental killings, injuries, and trauma they can produce.

In one February 2013 operation, 18 SWAT team members descended on a residence thought to be a site of illegal drug activity in Lowell, Massachusetts. In conjunction with local police, the unit conducted a no-knock raid despite pre-raid intelligence showing the possible presence of a child. Finding a woman who “appeared to be preparing illegal drugs for use intravenously,” the unit arrested all five adults in the residence for unspecified drug charges.

The team also found not one child but three, escorted them out of the house, sent them to the hospital, and filed a child abuse and neglect report with the Department of Children and Families. The only “events/items of note” in the case report summary are the five arrests and unspecified amounts of narcotics and cash.

Tom Nolan, an associate professor of criminology at Merrimack College and a former Boston Police Department lieutenant, similarly believes that SWAT units’ focus on areas like suicide response are a waste of limited public resources and can make fraught situations worse.

“I was a Boston police officer and was on some of the first SWAT deployments in the 70s. Those were only for armed barricaded subjects in buildings, the reason we were deployed were for hostage situations or threats to harm others,” Nolan said. “That’s why they were established. What we’re beginning to see is that in small towns like where NEMLEC has jurisdiction, their officers want to be on SWAT teams, so they’re looking for any justifiable way to get on.”

“It’s certainly counter-productive to have a fully-armed militarized SWAT team respond to potentially suicidal suspects who are looking for ways out like suicide-by-cop situations,” contended Nolan. “I don’t know why you couldn’t just have someone respond who knows negotiation strategy techniques, without the tanks and the body armor.”

Some of the NEMLEC documents illustrate this problem. In one August 2012 SWAT operation, team members came to the home of a man who had told his father that he wanted police to kill him and barricaded himself in his bedroom. And with the arrival of 18 SWAT officers, referred to as “operators” in the reports, he almost got his wish. Fearing that he had hung himself, they broke into his room — and finding him instead “holding two large knives and hiding behind the headboard of the bedframe,” they immediately tased him, hitting him in the chest twice. The man then jumped out his glass window, lunging at outside SWAT team members with his knife. An operator then subdued him as he attempted to cut himself, covering several operators with blood.

In both the drug raids and operations dealing with potential suicides, the actions involved a startlingly large number of officers: 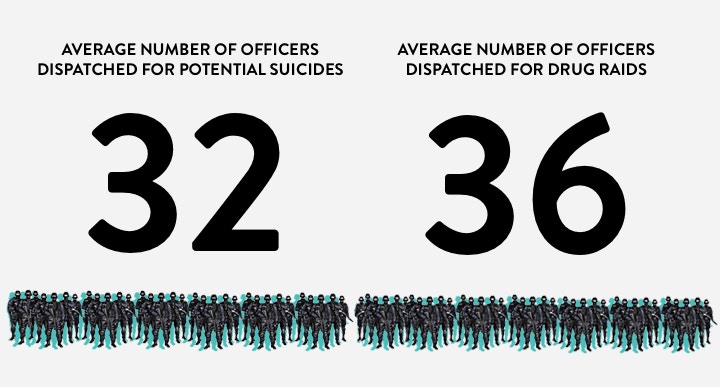 NEMLEC’s non-drug or suicide SWAT actions often show similar apparent overkill. “There’s certainly a need for SWAT teams to accompany officers if it has been proven that there are verified armed suspects,” said Nolan. “But far too often officers come in with SWAT teams on a hunch or what-if feeling that there are weapons present.”

In fact, though police departments often cite dangerous armed threats to justify SWAT involvement in seemingly low-level warrant operations, data from the NEMLEC documents suggest this danger is exaggerated. Of the 33 search or arrest warrant operations conducted by NEMLEC’s SWAT units between 2012 and 2014, only four found any firearms — all of them pistols, handguns, or revolvers.

And even in these four cases the response sometimes appears disproportionate to the risk. For example, in a December 2013 “emergency call-out,” a 28-person SWAT team used a BearCat vehicle in an operation to “contain” a disabled, wheelchair-bound man who had been accused of shooting at a woman’s car with a revolver in a dispute over pain medication.

Armed with tasers, long arms, a shotgun, 40mm less-lethal rounds, shields and battering rams, the SWAT unit rolled up to his apartment and were let in by one of the suspect’s associates. When the suspect did not open his bedroom door despite promising to do so, a shield team smashed their way in, only to find the suspect having difficulties getting up from his bed due to physical disabilities. The report reads, “The suspect was contained by the team and given the opportunity to get dressed and remove his catheter.” (The team later found the revolver between the head of the bed and the wall.)

NEMLEC did not respond to several requests for comment. In a peculiar twist, when the SWAT documents were first requested by the ACLU in 2012 under Massachusetts’ open government laws, NEMLEC claimed it was a private corporation and hence beyond the laws’ reach. The ACLU filed a lawsuit last year, and in a recent settlement NEMLEC reversed its position and released the records. According to Kade Crockford, director of the Technology for Liberty project at the ACLU of Massachusetts, “It’s critical for the public to have reports like this on a routine basis. There’s been a pretty robust debate about the militarization of the police, but it’s very difficult for the public to have an accurate picture of raids because we don’t hear about the day-to-day grind of SWAT teams in the drug war. Transparency is absolutely critical for oversight.”

Photo: Members of a NEMLEC SWAT team arrive at a location in Cambridge to take part in a simulated injured officer training exercise inside a building. (Jonathan Wiggs/The Boston Globe/Getty)