On the One-Year Anniversary of Israel’s Attack on Gaza: An Interview with Max Blumenthal

Blumenthal’s new book, The 51 Day War: Ruin and Resistance in Gaza, humanizes the people of Gaza and viscerally depicts their years of living under Israeli brutality.

One year ago today, Israel invaded, bombed and shelled Gaza, and continued to do that for the next seven weeks. According to the U.N., at least 2,104 Gazans were killed — 1,462 of whom (69 percent) were civilians, including 495 children. A total of 6 Israeli civilians, and 66 soldiers, were killed. The shockingly high civilian death rate in Gaza included the now-iconic imagery of four young boys from the same family being killed by Israeli warships while they played on a beach in front of a hotel filled with foreign journalists.

Months after the attack concluded, U.N. Chief Ban Ki-moon visited Gaza and labeled the destruction “beyond description,” far worse than prior Israeli attacks. At least 17,000 homes “were obliterated or severely damaged during the conflict,” and it will take two decades to rebuild them; that means that “nearly 60,000 people have lost their homes.” On countless occasions, entire large families of Gazans were instantly extinguished by Israeli violence. Because the population of Gaza is so young — 43 percent are under the age of 15, while 64 percent are under the age of 24 — the majority of its residents know little beyond extreme suffering, carnage, violence and war.

As harrowing as that data is, it tells only a small part of the story. Statistics like these have an abstract property to them: cold and clinical. Viewing the devastation of Gaza through their lens can have a distancing effect. They erase the most affecting facts: the stories of human suffering and devastation caused by this attack, the sadism and savagery that drove it. 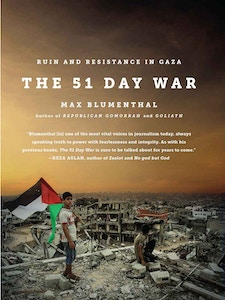 That is what makes Max Blumenthal’s new book about this Israeli attack so compelling, so necessary. Entitled The 51 Day War: Ruin and Resistance in Gaza, it humanizes this event like nothing else I’ve read. Blumenthal spent weeks on the ground in Gaza in the middle of the war (during a five-day ceasefire) and after it concluded. The book is filled with very well-documented history, facts and statistics relevant to what the Israeli military calls Operation Protective Edge. And all of those are both interesting and important. But his interviews with individuals in Gaza about their lives and what they witnessed will reshape how you think about all of this even if, as was the case for me, you followed the events closely while they unfolded.

The unbridled Israeli brutality that drove this attack, combined with the unprecedented ability of Palestinians to document what was happening to them through use of the Internet, significantly changed the way Israel is perceived around the world. This attack will prove to be historically important for how the world regards Israel, and Blumethal’s book is indispensable for understanding what happened here.

Even in the world of the Israel/Palestine debate — where smear campaigns and vicious ad hominem attacks are routine — Blumenthal is the target of some of the most scurrilous attacks you’ll ever see. In part that’s because he’s an unlikely candidate to have become one of the most vocal Jewish critics of Israel: the son of a Washington insider closely associated with the Clintons. In part it’s because he’s an unflinching and fearless critic, avoiding euphemisms and niceties when, by design, they obscure the truth. In part it’s because he has in the past sometimes opted for polarizing rhetoric and provocative, illuminating tactics.

But this book will likely surprise even those who have followed Blumenthal’s work and are sympathetic to his worldview. The 51 Day War is remarkably free of polemic, even as it retains its passion. It seems clear, at least to me, that Blumenthal was so moved by what he heard and saw in Gaza that he knew nothing would be more effective and revealing than just letting those stories speak for themselves. So he largely gets out of the way and simply serves as a vessel for the voices of those who are so rarely heard from in the Western world: those who live under Israeli brutality in Gaza.

I spoke with him for roughly 40 minutes about his book, as well as his own odyssey that has led him to devote himself to this topic with such singular devotion. Whatever your views on Israel and Gaza, Blumenthal is articulate, thoughtful and deeply knowledgeable, and has done extensive, real reporting to write this book. He’s very worth listening to, and the book is highly worth the read. Our discussion can be heard on the player below, and a transcript is provided here.

This transcript has been edited for clarity.

GREENWALD: This is Glenn Greenwald with The Intercept, and my guest today is Max Blumenthal, who, among other things, is the author of a brand new book entitled The 51 Day War: Ruin and Resistance in Gaza. Hey Max, thanks so much for taking the time to chat.

BLUMENTHAL: Great to be on with you, Glenn.

GREENWALD: Yeah, you too. So, the reason I wanted to talk to you isn’t just because you have this very powerful, but, to be perfectly honest, very kind of harrowing and depressing account of the Israeli attack on Gaza. It’s also because it is the one-year anniversary of that war.

And I wanted to begin by asking you this: My perception of the Israeli attack on Gaza, what the Israeli military calls “Operation Protective Edge,” is that the way that it was perceived and talked about and reported around the world was fundamentally different than prior Israeli attacks on Gaza, to the point where I think it actually changed perceptions of both Israel and Gaza in fairly fundamental ways.

And I wanted to begin by asking whether or not you agree with that, and whether you do or you don’t talk about how you think this latest war affected public opinion around the world about Israel, the occupation and its relationship to Gazans.

BLUMENTHAL: I think that’s right, and there are two major factors in why that took place, and why we saw a real shift.

I think Operation Cast Lead in 2008-2009 promoted a real shift in opinion within the political left in the U.S. But during that war, we saw the Israeli government, the government press office which hands out credentials to journalists, bar all journalists from entering the Gaza Strip. And so journalists weren’t able, except for the Palestinian journalists who were living in the Gaza Strip, to actually witness the violence up close. And this is disproportionate violence targeting civilians in a way we had never seen before in the Gaza Strip.