A Photo Essay on Yemen’s Victims of Saudi Airstrikes

On July 6, 2015, Saudi-led coalition airstrikes killed over 30 civilians in Al Joob, a village located in Amran, a rural governorate north of Sanaa. “We were sitting in the mosque, reading Quran. A while after the afternoon prayer we heard a plane circling, and a huge explosion,” says a boy surveying the damage to a mosque in the village of Al Joob, in Yemen. “People were running and there were pieces of bodies everywhere.”

On July 6, 2015, Saudi-led coalition airstrikes killed over 30 civilians in Al Joob, a village located in Amran, a rural governorate north of Sanaa. As Yemeni families shopped for produce, men prayed in the mosque nearby, and women prepared the evening meal, a missile struck a small market, burning cars, shattering glass, and sending shrapnel into the bodies of dozens of bystanders.

The strike on the market hit an open area. It destroyed the market and damaged the mosque and nearby homes. The second strike hit rocks that were set to be broken down into building material, and tore apart nine children and a man from a farming family selling fruits and vegetables.

There is no military site in the area, nor any place for possible weapons storage, according to local residents.

The two strikes in Amran are added to a long list of others, including one in Hajjah that killed 30, and another just north of Aden that left 45 people dead. So why does the Saudi-led coalition, which is supported by U.S. intelligence, continue to hit civilian areas? Saudi Arabia claims the air campaign has been successful in driving back the Houthis, Zaydi Shia rebels who also refer to themselves as Ansar Allah, yet civilians make up the majority of the casualties.

The air campaign, however, is only pushing people to oppose the Saudi-led coalition, which wants to force the Houthis from power. “We are simple farmers. Before this we were not involved in politics,” says Mabkhoot Musa, a resident of Al Joob. “But I swear now that they have killed our sons and nephews, we will be against Saudi until the end.” “God save us from this crisis. There is no comfort except from God. He will be the one to judge,” says Raja Mohsen, as she holds a Quran in her destroyed kitchen. Her home was damaged in the airstrike, and two children sitting in her living room were killed when the pressure from the bomb broke their windows. A Yemeni man from Al Joob lifts the thobe, a traditional robe, to show a shrapnel wound on a boy from the village. The injured youth was one of several boys selling produce to passing cars when the Saudi-led coalition airstrike hit, spraying rocks and shrapnel into their bodies. “There are still pieces of shrapnel near his lungs,” he says. “But we have to wait until the doctor comes later in the week.” Amran Hospital, one of only two in the entire governorate, received 70 casualties from the two markets strikes and another on a checkpoint. Hospitals are already overflowing with general illness and malnutrition cases from dirty water and lack of electricity. Yemeni men visit the new cemetery in Al Joob, dug specifically to accommodate the 30 men, women and children who were killed between two strikes on a public market and along a roadside. Some had already been buried, but other graves lay empty, waiting for the bodies to come from the morgue in Amran or Sanaa. More hopeful cases were sent to the better equipped hospitals in Sanaa, but most died on the way there. 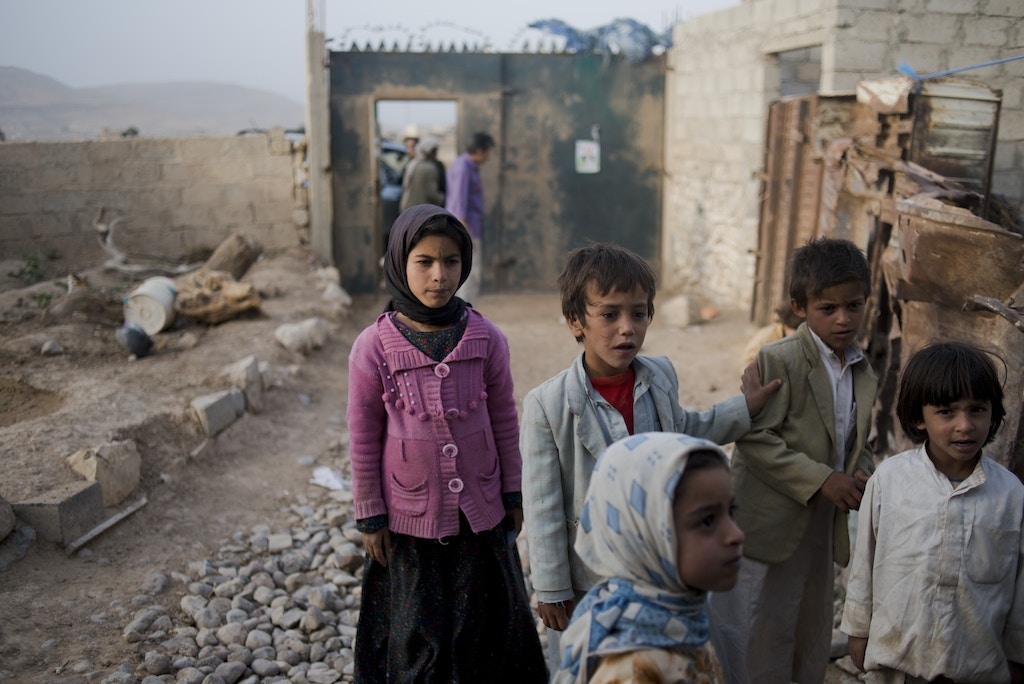 Yemeni children stand outside the Huwaiti home, as the mother of Mohammad and Ahmad mourns. She lost both of her sons, ages 17 and 14, who were selling produce on the side of the road, to a Saudi-led coalition airstrike in Al Joob village. 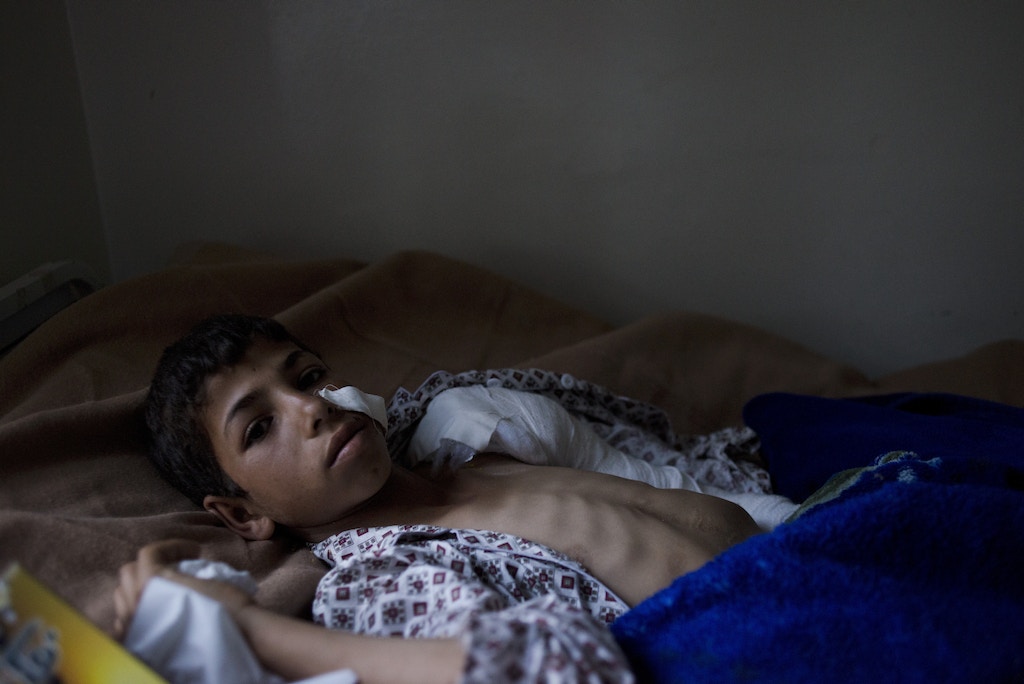 Hani al Ahnooni, 12 years old, lies injured in a hospital in Amran, Yemen on July 7, 2015. He was selling tomatoes on the side of the road in Al Joob when a Saudi-led coalition airstrike hit, killing nine children. His right arm was shattered and shrapnel remains in his head and left hand. A Yemeni boy stands in the main door to the old city of Amran, which has been spared airstrikes. The old city of Saada, in the north, has been almost completely destroyed. In Sanaa as well, a Saudi air strike destroyed a section of the old city. Most of the strikes in Amran governorate have been outside the provincial capital, hitting markets and homes in local villages.

Alex Potter (b. 1989) is a documentary photographer from the Midwest living in the Middle East.