Manning’s whistleblowing redounded to the benefit of all of us, and it’s incumbent on those who are able to do what they can to help her defend her legal rights. It’s in our collective interest to ensure that she is able to mount a full and vigorous defense of her rights.

I’m both thrilled and proud about our announcement today of a $60,000 donation in matching funds to Chelsea Manning’s legal defense. First Look Media, publisher of The Intercept, is donating $50,000 of that amount through its Press Freedom Litigation fund, with the other $10,000 donated by me. Freedom of the Press Foundation (FPF) — the group co-founded by Daniel Ellsberg, Laura Poitras, John Cusack, me and others, whose board of directors now includes Edward Snowden — will oversee and manage the matching fund campaign. FPF has agreed to waive all commissions, ensuring that 100 percent of donations goes to Manning’s legal fights.

As I’ve argued for years, Chelsea Manning is one of this generation’s greatest heroes. Daniel Ellsberg has called her “the personification of the word whistleblower.” Originally convinced of the noble intentions of the U.S. government generally and the Iraq War specifically, she enlisted in the U.S. Army. While deployed in Baghdad, she had access to troves of truth-revealing documents, which fundamentally changed her views and which she believed the global public also had the right to see.

Knowingly risking her own liberty, she gave those documents (none of which was top secret) to WikiLeaks for publication in order to trigger “worldwide discussion, debates, and reforms,” as she said during what she thought was a private chat with someone who turned government informant. The first Manning/WikiLeaks release — a video showing U.S. forces gunning down civilians along with two Reuters journalists while the soldiers chuckled and joked — sparked global outrage and debate. To this day, the materials she made public — which revealed massive wrongdoing, deceit and criminality — are centrally featured in journalism about critical stories in the public interest all over the world. These disclosures played a role in sparking the Arab Spring by exposing corruption of that region’s tyrants as well as thwarting U.S. efforts to stay longer in Iraq by documenting brutal war crimes committed there by American forces.

She could have enriched herself by selling those documents to a foreign intelligence agency or media outlet for enormous sums, but did none of that. That’s because she had only one motive: to inform citizens around the world of what their governments are doing in the dark.

For her noble choice, Manning has been persecuted, brutalized and imprisoned by the U.S. government. She was subjected to prolonged pre-trial abuse in a U.S. Marines brig, which an official U.N. investigation found was “cruel and inhuman.” She was accused of “aiding the enemy” — essentially treason — for making these materials public, a charge that would have sent her to prison for life. Though ultimately acquitted on that count, she was convicted of 20 other felony counts, including several under the Espionage Act of 1917, and sentenced to 35 years in prison. Already imprisoned for more than five years, she’s expected to serve at least seven more. She was incarcerated at the age of 22 and won’t be released until at least the age of 34.

Manning is now pursuing an appeal on several aspects of her conviction, which, if successful, could significantly reduce her prison term. The appeal involves complex and unsettled questions of law, as well as a long and complicated trial, and is thus incredibly expensive. It is also of great societal importance, as the outcome of the appeal will likely affect the rights and defenses of all sorts of other whistleblowers in the future.

How to pay these legal fees has become a source of significant stress and anxiety for Manning. Her public pleas on her Twitter account have produced close to $40,000 in donations, a fraction of what the appeal will cost.

Whatever else one thinks of Manning, she should not face limits in her ability to pursue her legal rights with full zeal, nor should her already difficult circumstances be exacerbated by worries over how to pay legal fees. Her actions redounded to the benefit of all of us, and it’s incumbent on those who are able to do what they can to help her defend her legal rights. It’s in our collective interest to ensure that whistleblowers are able to receive a full, vigorous defense of their rights, and that the government’s pernicious anti-transparency theories be contested.

We decided to make our donation in the form of matching funds for several reasons. First, we want to maximize the amount she receives by encouraging people everywhere to donate to the fund, knowing their donation will be instantly doubled. Second, there is great public value in having as many people as possible express support for Manning’s whistleblower rights and actions by donating, rather than having us do it alone: there is an important statement in having support for her be collective. Third, seeing that so many people support her will be of great value to Manning personally as she serves out her prison term. 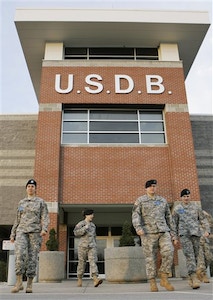 Beyond her extraordinary whistleblowing, Chelsea Manning is an incredible and inspiring person. In April, I visited her at Fort Leavenworth and was amazed at how she is handling her horrendous plight with such courage, determination and purpose. Remarkably, she harbors no bitterness toward anyone, even though there are plenty of deserving targets for it. She’s incredibly smart and thoughtful. Independent of the disclosures she enabled, just think about the extreme personal bravery she’s evinced: She’s on a sprawling U.S. Army base, in the middle of rural Kansas, in the maximum security military prison wing of that base (pictured right), and yet at her first available opportunity (the day her trial ended), she announced: I’m transgendered and will be transitioning while in your custody. It’s hard to put into words the admiration she merits.

But despite remarkable resilience and inner strength, her circumstances are hideous, indescribably difficult and profoundly unjust. What we’re able to do for her is limited. But we can at least convey a strong showing of public support, combined with alleviating her anxiety over legal fees and ensuring that the critical legal rights at issue in her case are vigorously and fully defended.

When First Look Media and The Intercept were founded in the fall of 2013, we resolved to build more than just a new media outlet. Beyond our journalism, we wanted as an institution to promote and defend values of transparency, press freedom, whistleblowing, privacy and basic legal rights. Creating this matching fund campaign and making this donation is an expression of that original vision, and there’s no more deserving recipient of this support than Chelsea Manning.

Those who wish to donate can do so here.