The Making of a Republican Snowdenista

Prior to the Snowden revelations, Massie says, he knew almost nothing about the NSA’s surveillance techniques. Now, he says: “If you assume the worst, it’s not a bad position to take, given what we’ve found out.”

Rep. Thomas Massie, R-Ky., hands me a copy of a letter from James Clapper in which the director of national intelligence complains to two members of the House Intelligence Committee about Massie’s recent attempts to reform one of the NSA’s massive surveillance programs.

On the top right, in curly script, Massie has written his response: “Get a warrant.” It’s in red ink. He’s underlined it.

“If you assume the worst” about the National Security Agency’s surveillance practices, Massie tells me, “it’s not a bad position to take, given what we’ve found out.”

Indeed, for Massie, as with so many others, the information NSA whistleblower Edward Snowden gave journalists two years ago about the extraordinary sweep of U.S surveillance programs was a huge eye-opener.

Prior to the Snowden revelations, Massie says, he knew almost nothing about the NSA’s implementation of the tools Congress gave it to protect national security. 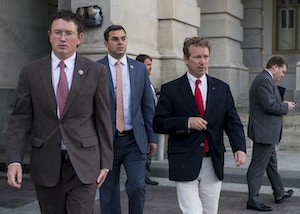 Massie, left, with Justin Amash and Rand Paul, after Paul’s filibuster on May 31.

When he tried to find out more, in secret briefings and from his friends on the Intelligence Committee, he learned things he isn’t allowed to share. He tells me he is sure that there is more he doesn’t know — because it’s hard to know what to ask. “It’s ’20 questions’ — you don’t know what questions to ask,” he says. “There are concentric rings of knowledge” when it comes to surveillance. “I am on the outer ring.”

But what he does know about NSA surveillance, aside from what Snowden released to the public, he doesn’t like. “There are line items we’re paying for …” he says, and shakes his head, unable to finish his sentence.

Massie is one of several Tea Party Republicans, including presidential candidate Sen. Rand Paul, R-Ky., and privacy hawk Rep. Justin Amash, R-Mich., who have been fighting against NSA surveillance since soon after Snowden first revealed it.

He joined Paul’s attempt to block renewal of portions of the Patriot Act in May, literally cheering him from the sidelines during Paul’s 10-and-a-half hour filibuster on the Senate floor. Eventually, with the passage of the USA Freedom Act in July, Paul and his camp saw their first victory: Section 215 of the Patriot Act , which the NSA had used to justify its bulk collection of American telephone data, was amended, forcing the NSA to shut down the current program in less than five months.

When we meet in his office, Massie is eager to talk about the next big fight in Congress, over Section 702 of the Foreign Intelligence Surveillance Act. Just as Section 215 was written to sunset on June 30, 2015, Section 702 will be stricken from the books in December 2017 unless Congress acts in one way or another.

Those communications belong to “targets” of the NSA, the people those “targets” talk to, as well as extra messages the system vacuums up “incidentally.”

And once all those communications are collected, the NSA can and does search through them.

Section 702 is meant to be directed at foreigners, but it ends up serving as a de facto “backdoor” way of searching emails and phone calls made by Americans whose communications go overseas – whether it’s because they’re communicating with someone abroad, or because domestic traffic was simply rerouted abroad on its way to its final destination.

Once the communications are collected, the NSA is required to follow “minimization rules” that limit its inspection of U.S. persons’ communications, but it’s entirely unclear whether or not that happens and how often.

To Massie, that collection is so invasive that even though Section 702 comes up for renewal in 2017, that isn’t soon enough. “We need to act now,” he tells me. “We’re not even trying to deny [the NSA] all the tools they have today … you can collect, but get a warrant.”

When Massie and Rep. Zoe Lofgren, D-Calif., tried to include a provision to the USA Freedom Act to limit 702 searches, it didn’t even get to the floor for a vote. Massie tells me he was told “the 702 program doesn’t expire this summer, we don’t have to deal with it now.”

So he developed a new plan. And that’s what Clapper’s June 12 letter — the one Massie graced with his three-word response — was about.

Massie has helped propose multiple amendments aimed at taking away the intelligence community’s “power of the purse” in order to chip away at 702 before the provision expires. “We’re laying the foundation,” he tells me.

The most important is an amendment to the Pentagon appropriations bill, which passed the house 293 to 123. The amendment, which Massie also partnered with Lofgren to put forward, would forbid the NSA from using its funding to perform “backdoor searches” without a warrant on Americans’ communications. It would also forbid the government from asking for special keys to unlock encrypted communications, which technologists and privacy experts say would weaken American data to outside hackers and criminals.

Another amendment, to the Commerce, Justice and Science Appropriations bill, would prevent the National Institute of Standards and Technology from using weaker encryption technology to allow the government easier access. That amendment passed 242-183.

Massie always calls for a tallied vote, rather than a voice vote, he says. The voice vote would allow lawmakers to back out of their earlier position later down the line if necessary.

But by requiring representatives to go on the record, he says, he can use that formal record to push for real reform in 2017.