The Department of Justice charged Dylann Roof with murder in the commission of a hate crime on Wednesday, but not domestic terrorism. Turns out, it isn’t that simple. The Department of Justice charged Dylann Roof, the white 21-year-old man who allegedly gunned down nine black churchgoers in Charleston, South Carolina on June 17, with murder, attempted murder and use of a firearm, all in the commission of a hate crime. Attorney General Loretta Lynch announced the charges on Wednesday afternoon.

But the DOJ did not charge Roof with domestic terrorism, or include terrorism in the indictment.

Some media outlets, lawyers, public figures and activists have called for Roof to be charged not just with a hate crime, an illegal act “motivated in whole or in part by an offender’s bias,” but with the separate label of domestic terrorism. Critics contend that the label of terrorism is too often only applied to Islamic extremists, and not white supremacists or anti-government anarchists. Many were outraged after FBI Director James Comey balked at the term during a June 20 press conference, telling reporters he didn’t see the murders “as a political act,” a requirement he designated as necessary for terrorism.

Roof’s crime certainly seems to fit the federal description of domestic terrorism, which the FBI defines as “activities … [that] involve acts dangerous to human life that violate federal or state law … appear intended to (i) intimidate or coerce a civilian population, (ii) to influence the policy of a government by intimidation or coercion; or (iii) to affect the conduct of a government by mass destruction, assassination, or kidnapping.” 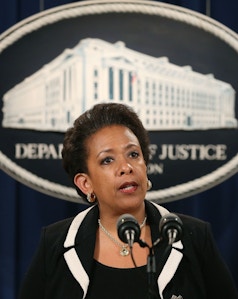 Attorney General Loretta Lynch speaks to the media during a news conference at the Justice Department July 22, 2015 in Washington, DC.

Remember: Roof allegedly told a few friends that he intended the murder of the parishioners, attendees of historically black Emmanuel African Methodist Episcopal Church, to “start a race war,” while his online “manifesto,” verified by the FBI, confirmed his motivations to intimidate and assassinate. He took as inspiration, among other things, George Zimmerman’s 2012 shooting of Trayvon Martin, the Confederate flag, the KKK and skinheads.

It turns out there was one major obstacle in charging Roof with domestic terrorism: The crime does not exist.

“As you know, there is no specific domestic terrorism statute,” said Lynch during the press conference to announce Roof’s indictment.

Even when the USA Patriot Act, post 9/11, redefined terrorism to include domestic crimes, the provision simply allowed the government to investigate more broadly what it called “terrorism.” Actually charging someone with domestic terrorism remains a separate matter. Even criminals who use bombs or send money to ISIS — or Boston Marathon bomber Dzhokhar Tsarnaev — are not charged with the crime of terrorism.

Because Tsarnaev used bombs, the 30 federal charges against him — unlike Roof’s case — included charges of “using a weapon of mass destruction,” which is one of the few crimes specified in the U.S. criminal code section for terrorism. So it was accurate to say he was charged as a terrorist.

But shootings, regardless of motivation, intention or number of deaths, likely don’t count. “It doesn’t seem like a shooting would fit,” says Faiza Patel, co-director of the Brennan Center’s Liberty and National Security Program. “Or else a lot of crime would get caught up” in the terrorism net, she tells me.

There are, however, “aggravating factors” to be considered during sentencing, which prosecutors usually list on a formal indictment, and which can be used to determine whether the death penalty is justified, and those include “substantial planning and premeditation,” to”cause the death of a person” or “commit an act of terrorism.”

In Roof’s case, the DOJ did not mention terrorism as an aggravating factor, but did reference “substantial planning and premeditation to cause the death of a person” for several of his charges. “When a prosecutor is writing an indictment, that’s what he or she has to prove at trial,” explains Michael German, a former FBI domestic terrorism investigator who now also works in the Brennan Center’s Liberty and National Security Department. “Rather than making a complex argument [and] getting into a big discussion on what terrorism is, they’ll make a simple argument.”

Lynch did not explain why “terrorism” was not listed as an aggravating factor in Roof’s indictment, though she did emphasize that the DOJ views hate crimes as “the original domestic terrorism.” She noted that Roof’s case, including his “discriminatory views towards African Americans” and his decision to target “parishioners at worship,” made his crime a clear-cut case of a federal hate crime.

Courts can also apply a “terrorism enhancement,” created in the mid-1990s, after sentencing, which would allow them to increase the penalty for the crime. This, writes Wadie E. Said, a law professor at the University of South Carolina, “also affords prosecutors and courts a vehicle of an expressive nature, to comment on their deep disapproval and condemnation of terrorism in a general sense.”

Mike German believes that even the enhancement could be “questionable” in Roof’s case. “If it had been a federal building rather than a church, a pipe bomb and not a gun …” he says. “It’s not distinguished by ideology, it’s distinguished by the nature of the crime. But I don’t have all the evidence.”

Some white supremacists have been charged with the terrorism enhancement in the past. In 2010, for example, neo-Nazi Wayde Lynn Kurt plotted an attack involving assassinating President Obama in Spokane, Washington, which he described as the “final solution,” and federal prosecutors added the enhancement to his sentence successfully.

For German and others, the issue is more about the importance of placing Roof’s crime against African American churchgoers in the realm of terrorism alongside radical Islamists and ISIS. “Calling it a hate crime instead of terrorism seems to suggest it’s less serious,” he says. “Rhetoric is important.” Patel echoes this notion: “It’s more of a question of the narrative of the issue. If you call what he did terrorism, you connect it to the broader definition of acts of terrorism.”

In general, however, Patel cautions against creating a specific domestic terror charge, because there are already too many crimes being labeled as terrorism that may be nonviolent or exercising freedom of speech. “You have all these acts that are terrorist but already criminalized,” she says. “[The crime of] providing material support to a foreign terror organization is already problematic. It captures things that are nonviolent.” And that, she believes, “comes close to the line of the first amendment.”

Lynch was asked whether or not there should be a federal domestic terrorism penalty to help bridge the gap between crimes like the shooting of five military personnel in Chatanooga, Tennessee — which was immediately branded as terrorism, by law enforcement and media alike — and Roof’s case, which was not. Lynch acknowledged the argument that leaving out the word terrorism may cause people to feel like the government “doesn’t consider those crimes as serious.”

But she doesn’t agree. “I want to be clear that nothing could be farther from the truth. This type of crime in particular, racially motivated violence for which a federal law was specifically enacted to cover, is of grave importance. … Sometimes people like to focus on the terminology. Since 9/11 there has been a great focus on [terrorism.] But it should in no way signify that this particular murder or any federal crime is of lesser significance.”