A new report claims members of the DEA and U.S. Marshals Service — dressed as Mexican marines — secretly carried out the 2014 arrest of the world’s most powerful drug kingpin. 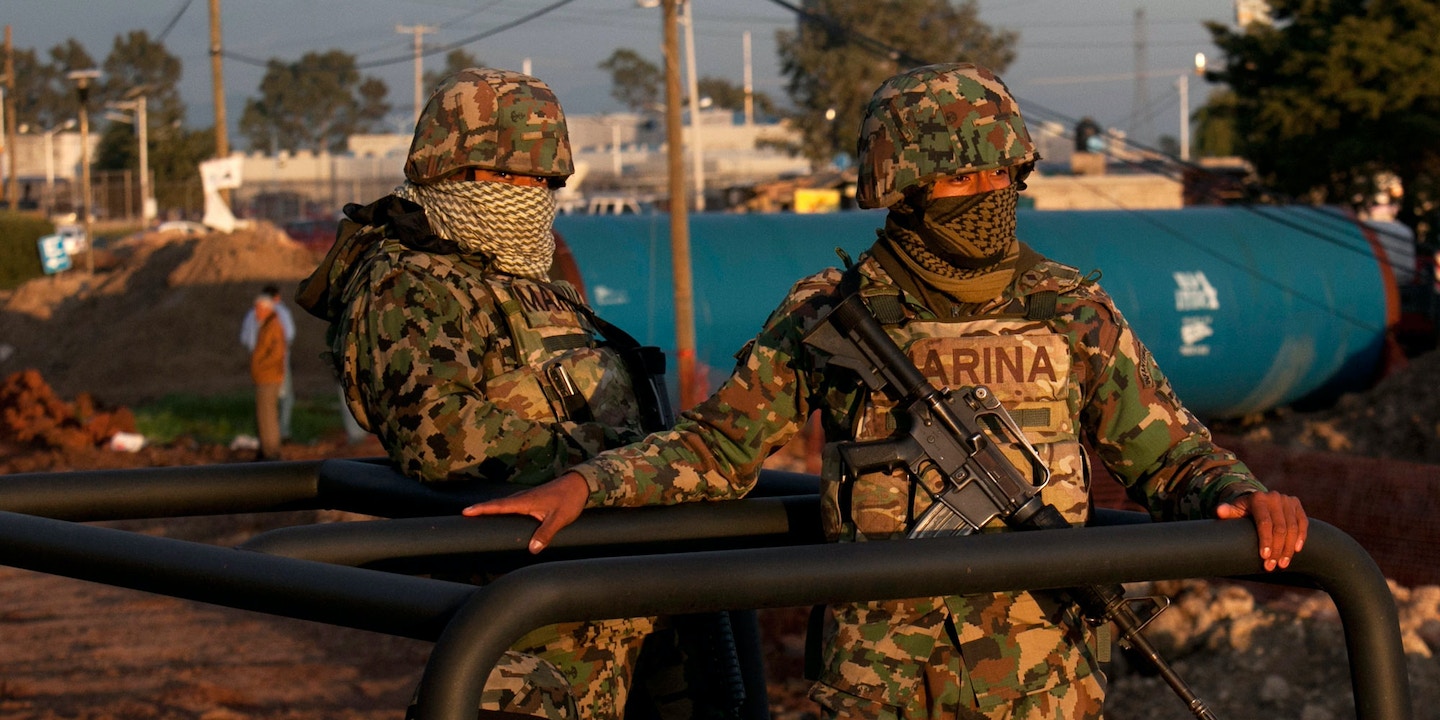 In the wake of drug kingpin Joaquín “El Chapo” Guzmán’s sensational escape from Mexican prison on July 11, explosive new allegations have emerged about the circumstances of the February 2014 arrest in the resort town of Mazatlán that landed him behind bars. For more than a year, the official story of El Chapo’s arrest has placed elite Mexican marines at the head of the operation, with U.S. federal agencies playing a crucial intelligence support role. However, a new report citing U.S. government sources claims that account is false.

According to leading Mexican investigative newsmagazine Proceso, the agents who arrested Guzmán weren’t Mexican at all — they were Americans, members of the Drug Enforcement Administration and the U.S. Marshals Service, dressed as Mexican marines, working alongside one or more unidentified U.S. intelligence agencies.

Government officials from Mexico and the U.S. have yet to dispute the accuracy of the story, published in the magazine’s July 18 issue, eight days after the world’s most powerful drug trafficker escaped from Mexico’s top maximum security prison, though former officials from both sides of the border expressed their doubts to The Intercept. The magazine’s special features are behind a paywall online.

The Proceso article, by J. Jesús Esquivel, a veteran reporter who has written two books on the history of the DEA and CIA in Mexico, follows anonymous claims from U.S. officials to U.S. media outlets asserting that Guzman’s escape was foretold in warnings provided to authorities in Mexico. Mexican officials have denied these claims.

Filed from Washington D.C., Proceso’s account of Guzmán’s capture is sourced to two U.S. officials whose positions in government are not revealed. Together they claim that his arrest — and much of the intelligence that led to it — was kept secret from Mexican officials until after he was apprehended.

The Mexican constitution places strict limits on the operations of foreign law enforcement, military personnel and intelligence agencies on Mexican soil. In recent years, however, joint U.S. and Mexican counternarcotics operations have pushed those constraints to the brink, with Americans more deeply embedded in the so-called drug war in Mexico than ever before. If true, the Proceso account would represent one of those operations taken to the extreme — with Americans keeping their Mexican counterparts in the dark in order to drive an armed operation to capture Mexico’s most wanted man, in potential violation of Mexican law.

According to Proceso’s sources, U.S. marshals and DEA agents had “perfectly” zeroed in on Guzmán’s “movements” through “interception systems” including satellite tracking in the three weeks prior to his arrest; they were waiting for the right moment to strike. A slew of cartel informants also provided information on Guzmán’s whereabouts, the sources said, adding that these developments were strictly hidden from President Enrique Peña Nieto’s government. Raids on safe houses leading up to Guzmán’s capture additionally yielded “very important information” that was only shared within a trusted circle of Mexican marines, the magazine reports. The sources did not deny working closely with the marines in the hunt for Guzmán — the marines have emerged as the United States’ go-to partner in Mexican counternarcotics operations.

Once the Mazatlán hotel where Guzmán was staying was located, via satellite intelligence, the Americans — including “a group of DEA agents dedicated exclusively to the capture of El Chapo,” along with other U.S. personnel — quickly prepared to act on the information. The Americans did not seek authorization to make the arrest, the sources said, fearing that doing so would doom the operation.

“Agents from the DEA and U.S. Marshal’s Service dressed in the uniform of the Mexican navy, grabbed their weapons, covered their faces in black balaclavas and asked only for logistical support (official vehicles),” the magazine claims, adding that two Mexican marines were posted in the vicinity of the building but were not told exactly where the raid would take place.

Over the course of the next 10 minutes, additional U.S. agents arrived in armored Mexican marine vehicles, the sources said, and moved to the entrance and exit of the building. Pairs of Americans from the DEA, the Marshals and another unidentified U.S. intelligence agency made their way up the stairs of the hotel to unit 401.

Carrying high-powered rifles and door-breaching equipment, the Americans entered the room, the sources said, where they found Guzmán’s only bodyguard, Carlos Manuel Hoco Ramírez, asleep. The U.S. agents reportedly subdued Hoco Ramírez, who then led them to his boss. Guzmán was discovered naked in the master bedroom; his 22-year-old wife, Emma Coronel, lay trembling in bed. With his young twins in an adjacent room, Guzmán reportedly surrendered to the Americans. Joaquin “El Chapo”Guzmán after his capture in 2014.

Guzmán was handcuffed and led to a parking lot outside in his underwear, where armed men snapped photos of him, Proceso reported. One of the images was leaked to the Associated Press and circulated widely. According to the sources, the photo was not leaked by the DEA or marshals, but instead by another unnamed U.S. federal agency. The image depicts the cartel leader shirtless, his hair disheveled, with scrapes on his shoulder and face. A hand rests on top of his head.

“That hand is our agent who caught him and handcuffed him,” one of the sources told Proceso.

Guzmán and his gunman were reportedly transported in a helicopter by U.S. agents and Mexican marines to a hangar in Mexico City that belongs to the office of Mexico’s attorney general. It was during that flight, one of the sources said, that the Americans “notified the highest of levels of the Mexican government” of Guzmán’s capture.

After they arrived at the hangar, Guzmán and his bodyguard were presented to members of Peña Nieto’s administration, the sources said, and when the Americans removed their masks several government officials were “surprised” to see Guzmán’s captors were foreigners, Proceso reported, “but they did not ask why they were dressed as marines.”

The practice of U.S. Marshals dressing as Mexican marines and joining in armed counternarcotics raids has been reported before — but not this account of the Americans actually leading the charge. In November, the Wall Street Journal revealed that “about four times a year the U.S. Marshals Service sends a handful of specialists into Mexico who take up local uniforms and weapons to hide their role hunting suspects.” The DEA and the FBI “play a supporting role, in similarly small numbers.”

“The goal is to help Mexico find and capture high-value cartel targets,” the paper reported, while noting that some targets “aren’t on a U.S. wanted list.” The Journal reported that marshals indeed participated in Guzmán’s arrest, but at the time added, “It is unclear whether U.S. Marshals personnel were disguised as Mexican military men on the day he was caught.”

According to sources who spoke to the Wall Street Journal, when the highly risky operations go wrong, “it can turn into a flat-out kill mission.” Last July a U.S. marshal was wounded by gunfire in Sinaloa, Guzmán’s home state. The incident and the evacuation of the marshals contributed to the operations being revealed.

The details revealed in the Proceso account could not be independently confirmed. The Department of Justice declined to comment on the claims. A senior Mexican government official, in an email to The Intercept, avoided addressing the specifics of the story, but did note the illegality of armed U.S. operations on Mexican soil.

“Mexican law specifically prohibits that any foreign law enforcement agents or foreign military officers carry weapons or participate in field operations in the country,” the official said. “It is also a federal crime that any civilian, national or foreigner, wear the uniform or insignias of any law enforcement or military institution they do not belong to.”

“Enforcement and arrest operations within Mexican territory, including the apprehension of Mr. Guzmán Loera, are conducted with utmost respect for the law and human rights,” the official added.

A former U.S. federal investigator with extensive experience in Mexico, speaking on a condition of anonymity due to the sensitivity of operations there, told The Intercept that while the scenario described in the article was possible, he had no knowledge of it actually happening and seriously doubts that it did.

Alejandro Hope, a security expert in Mexico City who served as a senior intelligence official under former President Felipe Calderón, doesn’t find the account credible either, citing a New Yorker report published in May 2014 as a more reliable portrayal. If Proceso’s story were true, Hope says, the U.S. “would have had a huge leverage over the Mexican government,” and would likely have used that advantage to press Mexican authorities to extradite Guzmán to the U.S.

According to Mexico’s attorney general, the U.S. did not submit a formal request for Guzmán’s extradition until June 25, less than three weeks before the escape and some 15 months after he was arrested.

If accurate, the account of Guzmán’s arrest provided to Proceso would potentially invite serious diplomatic consequences, not to mention shift responsibility for one of the most famous arrests in Mexican history from the Mexican government to U.S. law enforcement.

According to the magazine, when former Mexican Attorney General Jesús Murillo Karam initially credited the Mexican marines for the operation, the Americans were indifferent. The goal was to capture Guzmán, one of the sources said, adding — with no apparent sense of irony — “The rest is political.”