No Safety for Journalists in Mexico

The killing of a Mexican photographer, murdered along with four women over the weekend in Mexico City, has added another name to the nation’s long list of dead journalists, leaving many to wonder if any place in the country is safe. 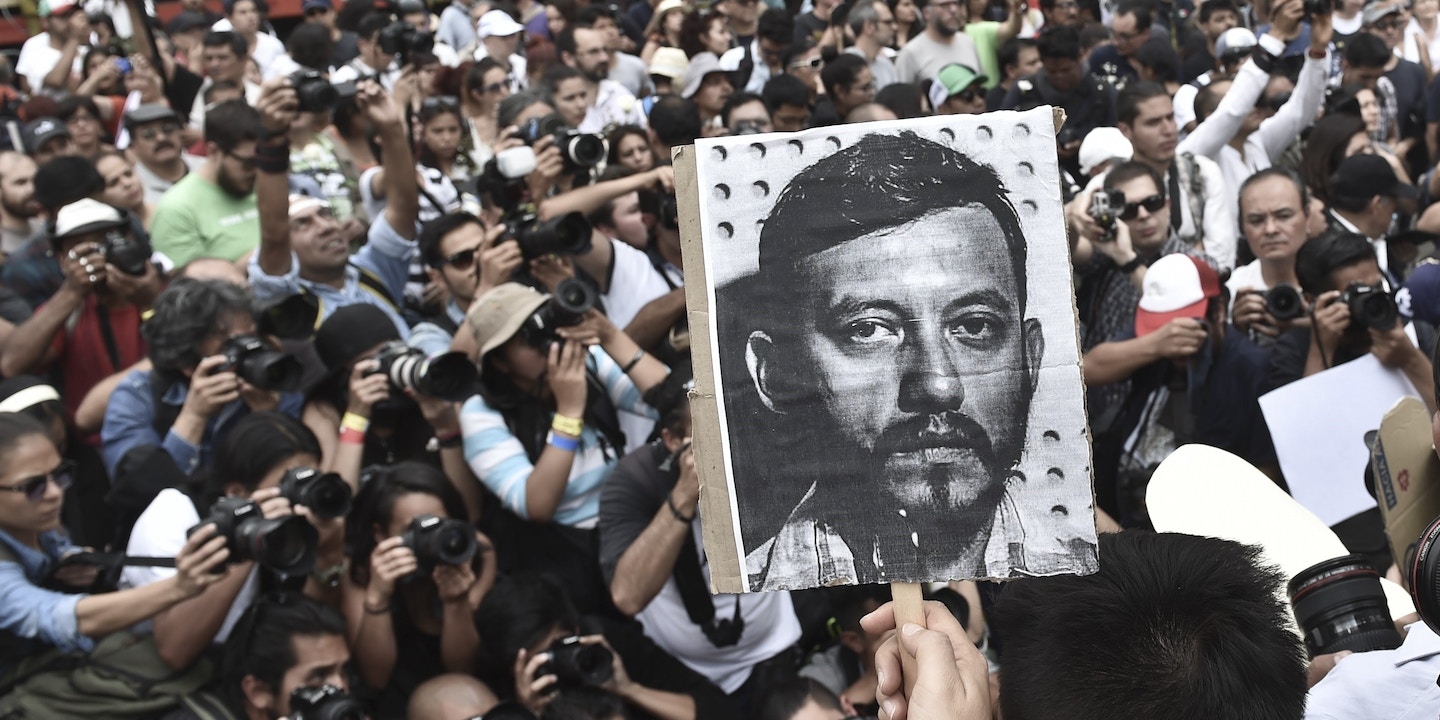 THE KILLING OF a Mexican photographer, murdered along with four women over the weekend in Mexico City, has added another name to the nation’s long, grim list of dead journalists, and left many wondering if any place in the country is safe.

The beaten body of Rubén Espinosa Becerril was discovered in an apartment in a middle-class neighborhood in the capital on Friday and was positively identified by family members the following day. By Sunday afternoon thousands had gathered to mourn him and the four women killed alongside him, one of whom was a young activist.

Evidence indicated that each of the victims was bound and tortured before being shot in the head, authorities said, adding that the wounds they sustained suggested they had resisted their attackers.

According to Article 19, a press freedom organization, Espinosa’s family members had reported him missing Friday afternoon and “notified the authorities to instigate search protocols.” While Mexican officials have maintained that they are pursuing all lines of investigation in the case, the press freedom group criticized the government for not taking action sooner.

“The threats that Espinosa had suffered were public, and his murder happened because the authorities charged with protecting journalists in this country didn’t lift a finger for him,” Article 19 said in a statement.

“It is time for federal and local authorities to take action to combat the serious press freedom crisis facing Mexico,” added Carlos Lauría, the senior program coordinator for the Americas division of the Committee to Protect to Journalists, in a statement posted to the organization’s website. CPJ confirmed that Espinosa had met with committee members and complained of physical intimidation and threats he had faced in Veracruz, the state he had fled just two months ago.

The government has not released the names of the women who were murdered along with Espinosa, although Mexican media have identified two of the victims as Yesenia Quiroz Alfaro and Nadia Vera. Quiroz was an 18-year-old beauty student. Vera, meanwhile, was 32 years old, a human rights defender and a member of the influential activist movement #YoSoy132. Like Espinosa, she had reportedly fled Veracruz due to the state’s deteriorating security situation and a sense that she was in personal jeopardy as a result of her activism. The remaining victims have been described as a 29-year-old Colombian activist and a 40-year-old domestic worker.

Emerging reports Monday afternoon, attributed to a neighbor, claimed that three of the four women were found partially clothed on Friday, their bodies bearing evidence of sexual assault. The prosecutor’s office in Mexico City cited property missing from the scene, including a vehicle. Though nine surveillance cameras were reportedly located near the building, officials have yet to confirm whether the assailants were caught on video.

The number of journalists killed in Mexico in recent years varies depending on the methodology organizations use to count the dead. The New York Times, for example, reported Monday that 41 journalists have been killed since 2010, while other groups have identified between 88 and as many as 127 members of  the press killed since 2000. By all accounts, 2015 has been a particularly bloody year.

“At seven months on, 2015 is already more deadly for journalists in Mexico than all of 2014,” VICE News reported, with Espinosa being “the second Veracruz journalist tracked down and killed outside the state this year, and the first to be killed in Mexico City, making him the first ‘internally displaced’ journalist murdered inside the Federal District.”

BORN IN MEXICO CITY in 1983, Espinosa moved to Veracruz, the most dangerous state in one of the world’s most dangerous countries to be a journalist, nearly a decade ago. He took a job at the news website El Golfo Info and photographed the campaign of Javier Duarte, an aspiring governor. Duarte assumed office in 2010, beginning a six-year term that has been marked by an unprecedented rise in journalist killings. To date, 11 Veracruz journalists have been killed in the state during Duarte’s time in office — two have been murdered outside the state, including Espinosa, and three others are missing.

Espinosa’s photography focused on social movements and protests, as well as daily news coverage. He picked up work as a correspondent for Proceso, Mexico’s leading investigative news magazine, as well as a number of other outlets. He also attended protests against media repression. At a 2012 protest against Duarte commemorating the murder of Regina Martínez, another Proceso reporter assassinated in Veracruz, state officials reportedly told Espinosa, “Stop taking photos if you don’t want to end up like Regina.”

Espinosa did not stop. The following year he and a number of other journalists documenting a sit-in organized by teachers and students in Veracruz took a beating from state security forces. After his equipment was confiscated and his photos deleted, Espinosa filed a formal complaint and continued working. In February, Proceso ran a photo he shot of Duarte on its cover. The headline read: “Veracruz: State Without Law.”

Under increased pressure, Espinosa relocated to Mexico City in June. After he documented masked men beating a group of students at an election protest, he said, armed men began following him with cameras. In July, Espinosa appeared on television publicly denouncing the threats he had faced. Just days earlier, Duarte had implored journalists to “behave,” and was recorded saying, “I say it for your best interest, for your families, but also for me and my family, because if something happens to you, then I’m the one who gets crucified!” Less than a month later Espinosa was dead.

“He was terrified and showed symptoms of post-traumatic stress,” Proceso’s award-winning investigative journalist Marcela Turati wrote in an article published on Monday, detailing Espinosa’s rise as a young photographer and his hounding by the state.

MEXICO CITY HAS long been considered a safe space for journalists and activists seeking shelter from repressive political officials and organized crime in other parts of the country. The murders this weekend have left some feeling that this is no longer the case. With Espinosa’s murder committed in Mexico City, Turati wrote, his death was “rubbed in the noses of the organizations where he reported the threats against him.” Worse still, she added, it was rubbed “in the noses of the headquarters of governmental bodies that should have protected him.”

“With this crime,” Turati wrote, Mexico City “stopped being a refuge for displaced journalists.”

Duarte issued a press release Sunday saying he “lamented” the murders and supported an investigation. The mayor of Mexico City, Miguel Angel Mancera, who called the killings “outrageous,” has requested state and federal support in investigating the crimes but has reportedly been unable to reach Duarte since the murders took place.

In July, AJ+ released “Death In Veracruz,” a 10-minute documentary detailing the militarization of law enforcement in Duarte’s state and the extreme threat reporters there now face. Andalusia Knoll, a Mexico City-based journalist, produced the film.

On Thursday night, the evening before he was murdered, Knoll exchanged a series of text messages with Espinosa. The pair described their hopes of one day meeting in person. Knoll, who worked with The Intercept in November to produce a two-part investigation into the infamous disappearance of 43 college students in the Mexican state of Guerrero, says Espinosa had taken heart in the solidarity he felt from fellow journalists as he sought refuge from the government.

“I never dreamed that he would be murdered in Mexico City, which has long been considered a safe haven for journalists at risk in Mexico,” she said.

In the context of a country where, according to some counts, six women are murdered every day, Knoll said the slaying of Espinosa’s four female companions was all the more horrifying. “This is just a brutal crime that serves to instill fear in the general population. It instills fear in any journalist who criticizes the government, in any activist who criticizes the government, basically any dissenting voice.”

According to Knoll, an American who has spent years living and working in Mexico, there is a perception that, at least statistically, the murder of journalists in Mexico is typically confined to Mexican reporters who cover crime and drug trafficking, particularly those who work in smaller towns for smaller outlets.

Caption: Mexican photojournalists hold pictures of their murdered colleague Rubén Espinosa during a demonstration held at the Angel of Independence square in Mexico City, on August 2, 2015.